A Day On The Bookmobile

In Ozaukee and Sheboygan Counties, a bookmobile, one of seven in Wisconsin, makes stops in small towns and rural areas loaded with about 4,500 rotating books and media.  It’s the Eastern Shores Library System bookmobile. Unlike most libraries, this one is noisy because the lights, heat, and computers are powered by a diesel generator.

Sue Potter, the bookmobile librarian, has been driving it since 1987. She’s joined by librarian Lisa Haartman.

“The first day I drove, my top speed was, I think like twenty-five,” says Haartman. “Country roads are really skinny. So, when you’re driving this big thing down the road and you see a car—[and get] a little panicky.”

Driving a bus loaded with books isn’t without its perils.

“If we go over a big bump, the books in the back will jump up,” says Potter. “And, I did take a corner once, a little too fast, and books flew out the door. But, a very nice man on a motorcycle helped us.”

Haartman takes returns at the back of the bookmobile. The books are arranged according to the heights of the patrons with adult materials on top so adults don’t have to bend down and children’s materials on the bottom for shorter arms and legs.

Carol Fredricks of Belgium, Wisconsin, homeschools her daughter Lily who gets books for fun and for school. The bookmobile is more than a library to them. It’s a place to meet their neighbors.

Children at the Divine Savior Catholic School in Fredonia seem to love the bookmobile. One boy calls it a “library on wheels.”

“If I had access to a bookmobile when I was young, it would have been wonderful,” says Potter.

The bookmobile is always open to the public when it stops at schools, daycares, or assisted living facilities like Belgium Gardens in the village of Belgium. Jackie Melsheimer lives there. She is unable to walk because she has MS. She’s happy that the bookmobile brings books and media, especially comedies into the facility. Others enjoy the convenience of books that come to them.

Elizabeth Karrels lives rurally in the town of Farmington near Fredonia. Because she has no internet access, Potter looks things up for her online in the bookmobile as she does for others with no or slow internet service.

On this long day, when the librarians finally park the bookmobile at 6:20 pm, around one thousand books will have been checked out. 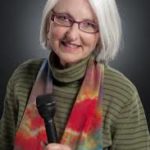