January is National Polka Month. And what better place to commemorate this iconic sound than in Wisconsin, where the polka is our state dance? To celebrate, poet Susan Firer shares a poem about her sister’s accordion and her mother’s irritation.

1956, the Year My Sister, Using Her Ill Health Once Again, Blackmailed My Parents Into an Accordion

My mother even hated
the name of the store where she had to pick it up:
Lo Duca Bros.

She waited until dark
to smuggle it from her Olds Holiday trunk
into our house.

Every time my sister unsnapped
and opened it my mother ducked as if fruit bats
were flying from its pleats.

To my mother the accordion was an immigrant,
one of my father’s relatives,
one that didn’t speak ENGLISH,
one that was pierogi fat,
that wore a babushka and anklets
to church, one she thought she had
talked him out of writing to.

My sister would go out on my parents’ suburban front
lawn between the maple & chinaberry tree
on the even, green, Bay Ridge, well-watered lawn
and practice “Lady of Spain.”

My mother imagined the clouds above
her house taking Lawrence Welk cutout shapes
that rained kolackys. Frankie Yankovic
was at her door. THE NEIGHBORS KNEW!
My mother hoped my sister would abandon the accordion
as quickly as she did her charm school, her twirling,
her water ballet and Mamie Eisenhower scrapbook.

My mother dreamt the Six Fat Dutchmen heard
all about her sick daughter and came
and taught her the “Too Fat Polka”;
all my father’s unrecognized relatives came
from Czechoslovakia to see the Six Fat Dutchmen
and do the Slovenian twirl in twilight
under plastic, electric, Chinese lanterns
strung around my parents’
newly landscaped suburban lot.

My mother bribed my sister away from her accordion
with a trip to New York to visit Uncle Jack, a professor
who taught labor relations at Cornell,
Uncle Jack, my mother’s brother. It was what my sister
wanted all along. The accordion was her wardrobe door
to Narnia, New York.

While they were gone the accordion sat alone
as the night convent of Saint Mary of Czestochowa.
The accordion had rows of nubs of wonderful
black buttons. I wasn’t big enough to carry it.
It was beauty. I imagined
it vast and pearl as a confessional,
gay as a Polkafest. I sat next to it;
I heard my sister’s silent accordion stop playing the past.
It began playing music I didn’t know yet. Years later
I’d call it Zydeco and dance to it on sweet, full summer
nights, on side city streets of the future
with holy card beautiful men
who loved nothing more than a woman
with an ear for a good accordion
and all the musics one can make. 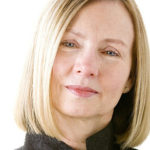 Susan Firer is the former poet laureate of Milwaukee and the author of many books, including Milwaukee Does Strange Things To People.