Army Veteran Turns To Forestry And Writing To Cope With PTSD

Bryan Box served two tours with the U.S. Army in Afghanistan. Now, he works in forestry in Wisconsin’s Northwoods. In 2019, Box wrote the essay, “Ghosts Of War In A Wisconsin Forest” for The New Republic, depicting his struggles with PTSD and the healing potential of the Northwoods. WPR’s Brad Kolberg recently visited with Box to walk through the woods, record his essay and talk about why he wrote it. A warning for listeners: this feature contains descriptions of violence and self harm.

Every day I start the shift by throwing on my marking gear. It’s not as heavy as my kit in Afghanistan. Just an easy 40 odd pounds with the paint. Instead of a blazing orange cruiser vest like the ones my coworkers use, I still take the old tactical vest I wore over my armor back then.

Bryan Box’s first unit was 1st Squadron, 4th Cavalry Regiment, which reflagged to 1st Squadron, 91st Cavalry for deployment to eastern Afghanistan. About a month before he was scheduled to leave the Army, he was “stop-lossed” for an additional 16 months and ordered to return to Afghanistan to run a troop operations center.

“I had the record in the squadron for the fastest medevac ever done: 11 minutes and 56 seconds from the time of the IED strike to when the wheels went up and our guys were on their way to the medical center,” he recalled. 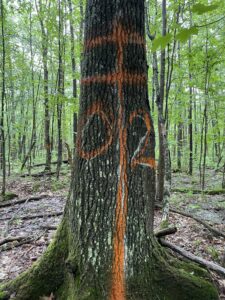 An Oak tree is marked by Box as a “Bearing Tree.” The adjacent area will be cleared so that acorns from this tree can drop and start a new age class of Oaks. (Brad Kolberg / WPR)

Box looks at his two deployments very differently. “On my first deployment, I spent a lot of time shooting at people,” he said. “And then my second deployment, my primary focus was getting all my guys home.”

“I don’t like taking life, I don’t like suffering,” Box admitted. “And so that first deployment was kind of a wreck for me. And then the second one, I did my best to prevent that.”

When he got home, Box took a job in forestry in Wisconsin’s Northwoods. That’s where the idea for the essay came to him. He was working 60 hours a week — alone in the woods — and having nonstop flashbacks.

Sometimes when I’m marking timber, I’ll have a flashback and just stand there staring off into space for God knows how long. I don’t know if my coworkers have noticed.

“And I was thinking about it, and I was like, you know, maybe I should put this pen to paper at least to try and exorcise whatever demon I was dealing with out there,” Box remembered.

A Thunderstorm passed through today, dropping walnut sized hail and blowing trees down around me. I hid under a big sugar maple as trees dropped all around me. I realized that I couldn’t remember precisely how many friends wound up in flag draped coffins. But that more died by suicide than from enemy action.

Post-traumatic stress is a part of Box’s daily life now. Sometimes it’s hard for him to make sense of his experiences, and those of his friends and fellow soldiers. The isolation of his current work feels therapeutic for him, but he also wonders if being alone with his thoughts might have consequences, too. 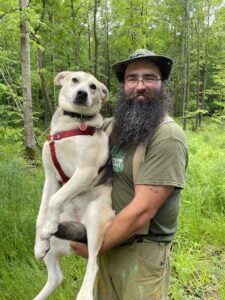 He said his essay was an attempt to make sense of his struggles and explain his experience to others. “I tried to show people what it was like to just have that running in your head all the time,” Box said. “That’s what PTS feels like, you know, and that piece was a bit cathartic.”

The U.S. Department of Veteran’s Affairs gave Box approval for an emotional support animal to accompany him during his work. His dog, Elias, is his constant companion.

“Elias is, like, he’s been a lifesaver, and he keeps me focused on the present,” Box revealed. “Like when he’s doing his 100 meter circle and he’s happily doing his thing and rolling in wolf scat, much to my dismay, he helps me so much.”

Sometimes when I’m out marking alone, I’ll catch something in the corner of my eye. I get the sneaking feeling I’m being watched. Often I’ll find it’s a deer, a bear, or if I’m really lucky, one of our wolves. But sometimes I don’t find anything, just left with a feeling of a presence. I wonder whether it’s my brain injury doing something sparky. But I’d like to imagine the entity is one of my dead friends come to walk with me under the emerald canopy.

Box has served his country in combat, but he says he still feels he owes a debt. When he was young, his family relied for a time on a USDA program that provided meals to families in need during summer breaks from school.

His mother — a disabled Veteran of the U.S. Coast Guard who was badly injured on a rescue mission — was also able to earn a degree in electrical engineering and became a successful postal worker with assistance from the VA. 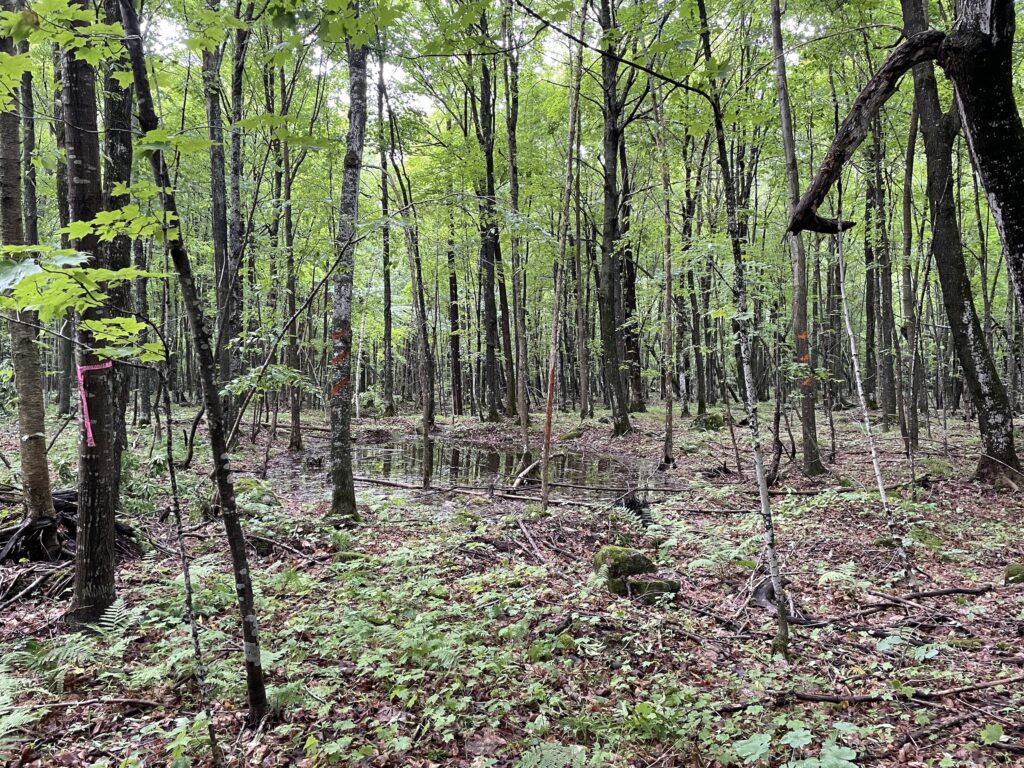 A section of forest marked by Box for rehabilitation. The goal is to create spaces on the forest floor and in the canopy that will allow old-growth species like Oak & White Pine to return and thrive. (Brad Kolberg / WPR)

“Those programs that the American people offered to both me and my family kept me from starving,” Box said. “They economically empowered my mom to go and get a degree … and have a decent life. That’s a debt that I’ll never be able to repay, but I’m doing my best, you know?”

Doing good forestry is like being the pen and writing a love letter to the forest. Fate, I have learned, is a haphazard forester. Marking clumps for destruction, then cutting unevenly, leaving some stems behind, vulnerable to rot. But under the right conditions, the stumps can sprout anew and the hollowed out stems that remain can find new purpose.

“If I can help the Northwoods sequester more carbon, I think that will be my contribution,” Box suggested. “I’ll take that as an epitaph. I love this forest.” 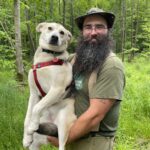 Bryan Box served two tours with the U.S. Army in Afghanistan. Now, he works in forestry in Wisconsin’s northwoods. In 2019, Box wrote the essay, “Ghosts Of War In A Wisconsin Forest” for The New Republic, depicting his struggles with PTSD and the healing potential of the northwoods.