La Crosse broomball teams sponsored by Animal House and John's Bar play each other at the Copeland Park Oktoberfest Shelter in 2013. (Maureen McCollum/WPR)

Broomball is a lot like ice hockey, except players wear shoes and use a ball instead of a puck. The game originated in Canada in the early 20th century and eventually made its way to La Crosse where bar-sponsored teams play weekly during the winter.

WPR’s Maureen McCollum took to the ice in a rink along the Mississippi River on one of the coldest nights of the year.

“Broomball is essentially hockey rules — a little slimmed down and made a little easier,” said Mike Brogan, broomball league coordinator for the city of La Crosse and Park and Recreation Director for the village of Holmen. He’s been playing broomball since 1990.

The athletes play with a “mini soccer ball” that’s the size of a softball. The nets are a little bigger than the ones used in hockey. Players don’t wear skates, but special broomball shoes that reduce their chance of slipping as they run on the ice.

“Most of the world doesn’t know what those are, but they’re quite unique. They have kind of a Chuck Taylor-look with a big spongy bottom,” said Brogan.

Then, of course, there are the brooms. They have a molded head and almost resemble a big spatula.

“It’s not really a broom anymore,” said Brogan. “It used to be brooms. Actually, there are a few players that still have brooms.” 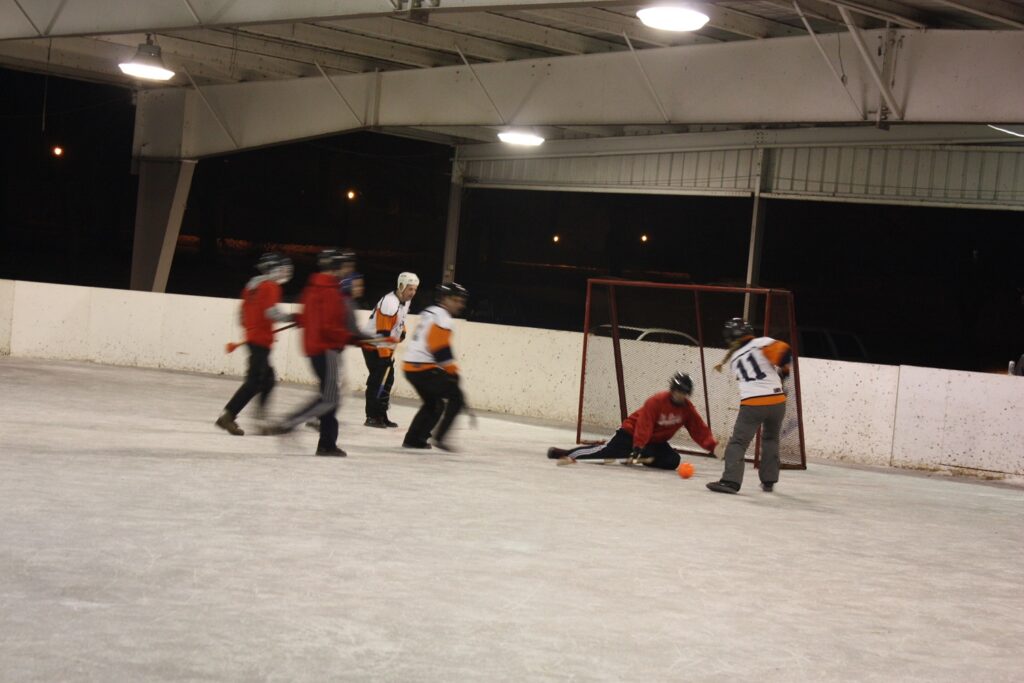 The John’s Bar broomball goalie tries to save the ball. (Maureen McCollum/WPR)

Like many adult sports leagues in La Crosse, the broomball teams are sponsored by local bars.

“I like to play broomball because it’s a great activity in the wintertime when normally people just mope on their couches and watch TV all winter or sit in the bars. This way you actually get out and get some exercise and sweat yourself up,” smiled Rachel Luehring, a member of the Animal House team (although she played for their rivals, John’s Bar, in the past). “It’s fun! And it’s nice because I’m a little competitive, so having a sport in the winter is nice to bring that out.”

“I’ve got icicles on my eyebrows right now. That’s why I love broomball, said Nick Fellenz, who plays for Animal House. “It could be 30 below, but you’re still sweating outside. Plus, anybody can play it. And if you get sweet jerseys like we do, you win every game.” 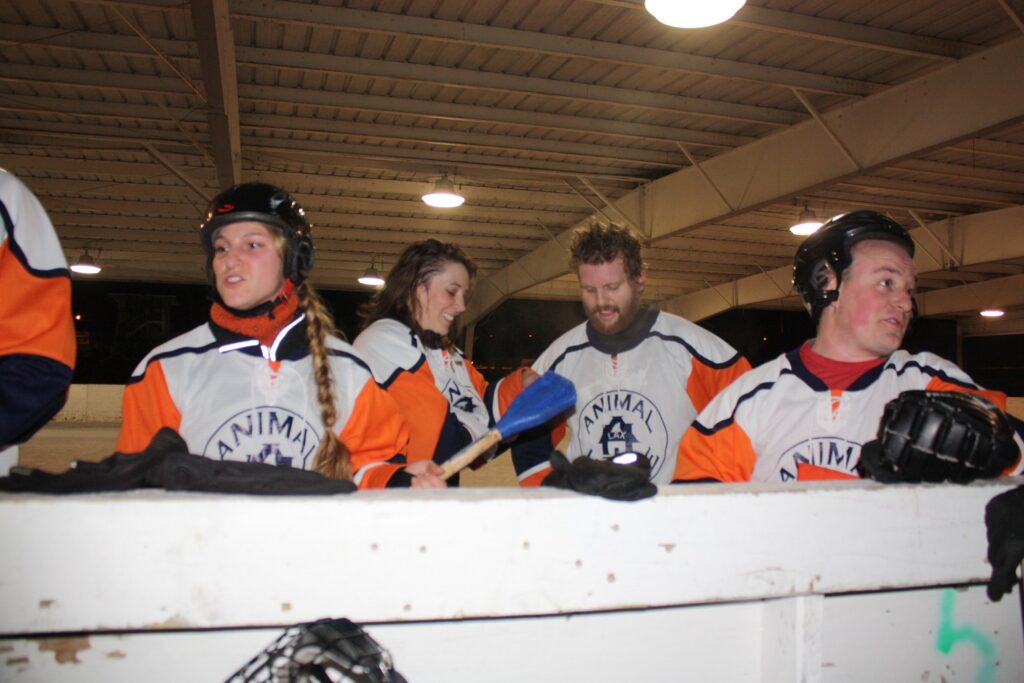 “I used to play hockey, too. It’s real similar to hockey, which I like,” said Lewis Parish, another Animal House teammate.

“And he likes to throw cheap shots out there,” one of Parish’s opponents yelled from the rink.

“Yup, that’s the opponent talking smack. Typical when he’s down,” laughed Parish. “There’s a lot of jawing in this game, but for the most part, everybody’s friends. And it’s a good time. Even when it’s negative 30 out, it’s still fun to get out here.”

Parish adds that players usually head to their team’s bars after the games.

Players like Pat Scheller is proud of his team’s history.

“I play for John’s Bar, the oldest established broomball team in the city.”

Scheller has been playing broomball for 33 years.

“My favorite broomball story? Ummmm, I think the fact that I was have been ejected several times,” laughed Scheller. “I mean, I played with people 30 years ago that I’m still friends with and I’m making new friends this year. I think that’s what I like. I’m 56 years old and I’m outside doing something in the middle of the winter, five degrees above zero.” 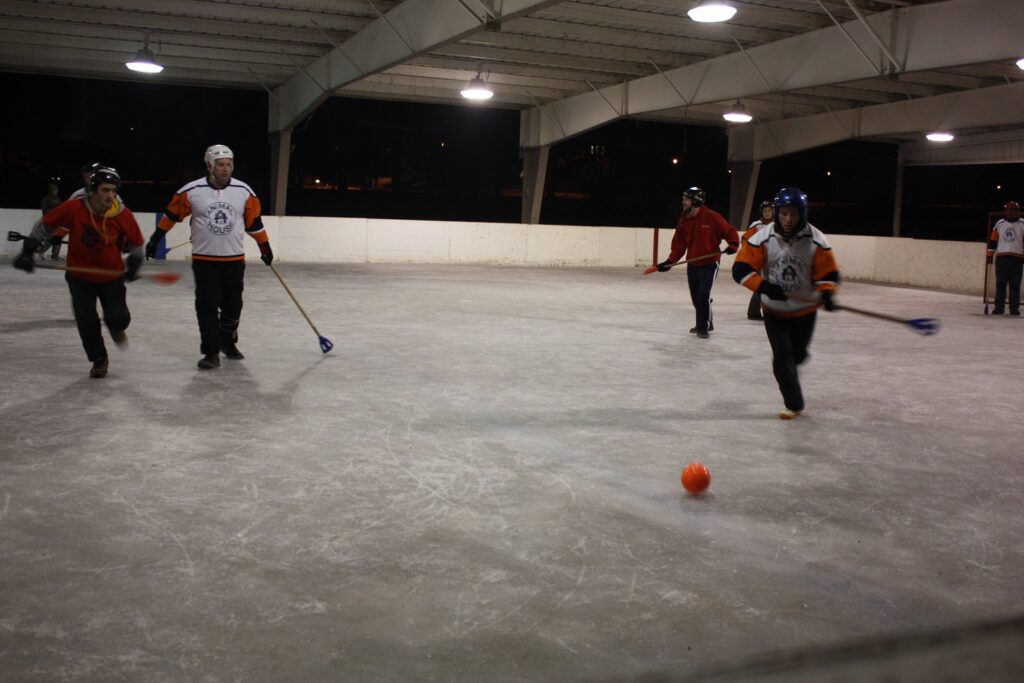 Broomball teams play once a week during most winters. (Maureen McCollum/WPR)

This broadcast story aired again on February 26, 2021 to honor the 10 year anniversary of “Wisconsin Life” on Wisconsin Public Radio. “Wisconsin Life” host and producer Maureen McCollum chose to share this broomball feature as part of the celebration:

How can I choose a favorite story?! I love them all. Some stories stick out because of the amazing people I met. With other ones, I love how the sounds are able to transport the listener to the scene with me. But there was one story that felt perfect for this moment — a night of broomball in La Crosse.

I recorded this story back in 2013. It was one of the coldest nights of the year. My feet were solid blocks of ice and somehow my recorder didn’t freeze.

This story brings me so much joy. It shows how Wisconsinites are so resilient and will do anything to stay active and happy in the winter.

Plus, this is one of the few times I’ve featured my friends in a story. I’ve done thousands of stories in my life and only like two or three of them includes a friend. And I really, really miss my friends right now. Hearing their voices warms my heart. It reminds me that one day, this pandemic will pass and we can get back to our normal lives — cheering each other on doing the weird things we all love to do in Wisconsin.

Hearing the sounds of the game and the freezing yet resilient athletes take me right back to the rink along the banks of the Mississippi River. I hope you enjoy the journey with me.