The Case Of The Two-Headed Calf

The Billboard had promised gasoline, sandwiches, and the opportunity to see a two-headed calf named “Heady”.

Standing in The Pit Stop in Mineral Point, I gazed up and scanned for signs it was a hoax. Maybe the deformity was the result of a clever taxidermist’s touch rather than the handiwork of a hilarious, but also cruel and uncaring god?

I regularly scold myself for being disengaged from the majestic world around me. For slipping away, mentally, and not taking note of the beauty when a dollop of fresh rain collides with an old, soft, green-hued plank on a porch. For not being stunned by the mythic, atavistic form of a vast cloud of steam rising from the sagging jowls of a big dog on a sunny, midwinter afternoon… 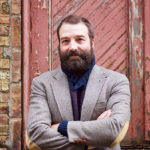