Enjoying The Last Days Of Autumn Before Winter

Right about now, you’re probably enjoying all that Autumn has to offer. You’re pulling your cozy sweaters out of storage, remarking on the luscious colors of fall on your drive to the pumpkin patch, perhaps in a heck, life’s too short to deny myself candy corn moment, you eat a bag or two, but somewhere in the back of your mind, amidst all this crispy revelry…admit it, you’re uneasy. You know what’s coming. Winter.

Remember last year’s? That really depressing one that knocked even half-glass full people on their cheerful behinds? I freely admit that I’m not the most chipper person, writers rarely are. In fact, most of us are generally skirting the edges of the kind of cliff that one normally sees on the covers of Gothic romance novels. But thanks to years of mental health tinkering, I recognize the warning signs that pop up before I’m about to go around the proverbial bend. So…when I began to experience flashbacks from Stephen King’s The Shining last February, I suspected that I’d come down with a profound case of Cabin Fever courtesy of Mother Nature. (It always gets down to our mothers, doesn’t it.) My therapist’s advice? Get out of the house. Socialize.

Well, this is a bitter pill to swallow for one who has found that the best way to cope with winter is to hibernate January through May. Why should I leave my cave? God invented Pea Pod so my groceries could be delivered to my front door, seventeen thousand television channels provide me with semi-entertainment, and I know how to build a fire in my place better than most Boy Scouts. BUT… in the interest of not being found ranting and raving in the Springtime with Redrum scribbled across my living room walls, I headed toward my local coffee shop, where I hoped that someone not too perky—really happy people give me migraines— would ask if they could share my table. I’d absorb the atmosphere, make chit-chat, quickly down a cup of hot cocoa and leave the shop feeling that I’d been a good patient.

After driving the three blocks to town—a feat I likened to competing in the Iditarod—there I was, cozied up in the corner of The Roastery, when a very elderly woman approached the empty seat at my table. I stifled a moan and steeled myself to be assaulted by some over-the-top grandchild beaming and bragging, but as the woman un-wound her five foot long scarf with her knobby fingers, much to my surprise and delight, she jerked it up like it was a noose and said out of the side of her mouth, “I was counting on dyin’ before I had to go through another one of these crappy winters.”

I found myself smiling for the first time in months. Turns out that not only do therapists know best, so do authors. Misery really does love company, eh, Stephen King? 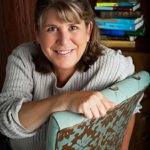