Father Decides How To Discuss Santa With His Son

The year my older son started kindergarten—our third in Wisconsin—I learned about St. Nick’s Day. Children set their shoes by the fireplace before bed on December 5th and wake the next morning to find their Keds and Converse filled with chocolate coins wrapped in gold foil, a small toy or two. A mini-Christmas, weeks before the big day, commemorating the Feast of St. Nicholas, the fourth century Bishop of Myra. A parent at the school told me that everyone in Wisconsin celebrated St. Nick’s. If our son missed it, he’d feel left out. We didn’t want that, did we?

We didn’t have a fireplace, so our sons left their shoes beneath the thermostat. The next morning they bounded downstairs and dived for the loot. Two-year-old Hayden sat on the floor and devoured his entire stash of chocolate coins, wrappers and all. At five, though, Galen was puzzled. “Is this Christmas?” he asked.

“Does St. Nick work for Santa?” Galen asked. “Or does he work for God?”

Since becoming a father, I’ve had my misgivings about propagating the Santa Claus mythology. It’s not Santa’s make-believe status that bothers me, but rather how children are encouraged to believe in him when they’re little only to have the fable later revealed as a fraud.

This was my chance to set a few things straight.

“St. Nick was Santa,” I said. “He was a real person who lived a long time ago. He was so famous that everyone in Europe knew about him and told stories about him long after he died.”

“A long time ago,” I said. “We remember him at Christmas because his story reminds us to be generous.”

Galen stared at the tree. He looked as though he’d grasped some fundamental human truth—about, perhaps, the ways fables can tell us something about who we are and ought to live. I congratulated myself for making the truth plain. I hadn’t said Santa wasn’t real; on the contrary, Santa was as real as he and I, subject to the same cycles of life and death.

But the next week, his teacher called. “We had some trouble today,” she said. “We were making ornaments when Galen announced to the class that Santa was dead.”

“I’ve already had a few parents call,” she said. “Christmas is less than two weeks away.”

Her tone was unmistakable: rumors of Santa’s demise needed to be dispelled, pronto.

I found Galen in the living room watching TV. I sat down and waited for an opportunity to broach the subject. Hey kid, remember that conversation we had last week? Turns out I was wrong: there really is a fat guy in a velveteen suit with flying reindeer who can squeeze through air ducts. . It sounded not only stupid but cowardly, a bald-faced repeal of the first consequential truth I’d ever told him.

I never did find a way to tell Galen that Santa wasn’t dead. But without further intervention, he decided to hedge his bets and declare Santa alive again. A few days before school let out, he brought me his Christmas list and asked me to burn it. A friend had told him Santa would read the smoke. Christmas lists sent by smoke signal were more reliable than using the mail. “You’re sure Santa will get it?” I asked.

As I watched Galen lean over the sink to study the paper as it blackened, I understood why he wanted to believe. Believing in Santa is ultimately an act of community during a season when community is paramount. Hoping we’ve made the “nice” list helps reassure children that they’re worthy of the love, goodwill and yes, even the presents that come their way during the holidays. It’s not Santa’s magic that children cling to and need, but his grace.

On Christmas Eve, I ushered the boys upstairs to bed. They kicked their feet inside their sheets and squealed. “Santa can’t come until you’re asleep,” I said. “Stay in bed.”

Galen drew an X on his chest. “I promise.”

I leaned down to kiss him. “Merry Christmas.” 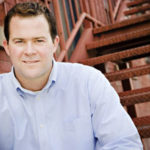 David McGlynn is the author of A Door in the Ocean and The End of the Straight and Narrow. His stories and essays have appeared in Men’s Health, The Huffington Post, Best American Sports Writing, and numerous literary journals. He teaches at Lawrence University in Appleton, Wisconsin, where he lives with his wife and...