Anyone who’s done serious renovation on an older home, ripping down lath and plaster, wrestling with stubborn two by fours and prying up floorboards, has probably harbored the fantasy of finding some kind of long-hidden treasure. Civil war medals, a moth-eaten bag of precious coins, possibly a secret diary full of scandalous confessions.

Unfortunately, what is often discovered are crumbling foundations, rotted timbers and plumbing issues, if not a desiccated mouse or two. But sometimes a do-it-yourself-er finds a shoe.

Through an amazing coincidence, two of my friends, living 200 miles apart in Wisconsin, told me shoe discovery stories. One was Celia, who found a dainty little girl’s shoe in the recess above a window she and her husband Paul were replacing in their 1890’s farmhouse in Amherst.

The sole was worn through, the leather cracked, but the cunning button hooks that ran up the side and its pointed toe still conveyed the elegance of old world craftsmanship. Celia was fascinated with the shoe, both for the mystery of how it came to be there and the history of its owner.

A high school art teacher, she added the shoe to her collection of objects to be sketched by her students, and then twenty years later, passed the shoe on to the new owners of her home when she and her family moved.

Another friend, Joe, has a reputation in his small town of Marshall for treasuring all things old. In fact, he and his wife Kari have devoted a good share of their life to renovating a small hotel built there in 1873 as their family’s home.

A neighbor down the street who was rehabbing his own 100 year old home, told Joe, “You’re going to like this…,” and pointed him to a tool box holding a well-worn girl’s boot he had found between two wall studs. 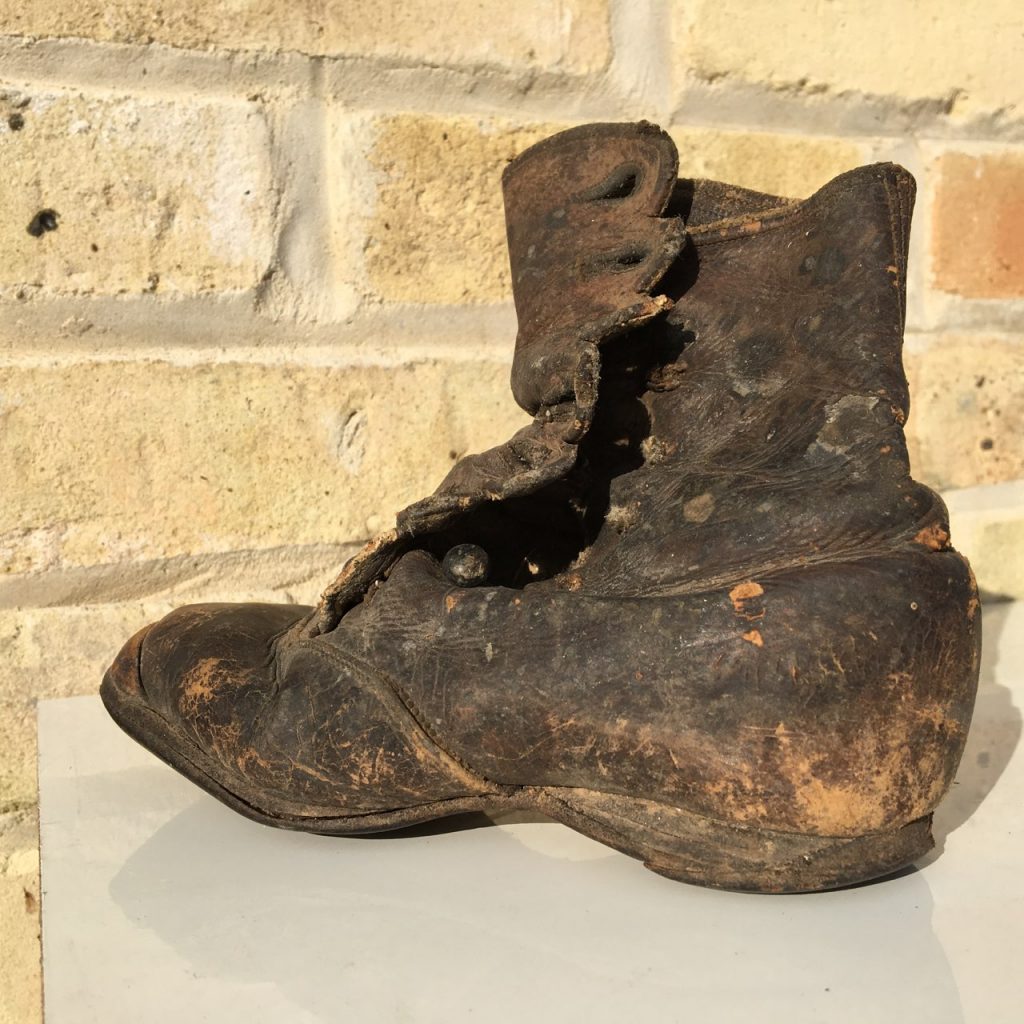 A close-up of the “Marshall Shoe” at the Marshall Area Historical Society Museum. Concealing shoes in walls has been a custom for home builders dating back to 14th century England. (Courtesy of Ron Davis)

Since retirement from a clinical psychology practice, Joe has devoted himself to charitable pursuits, repairing and repurposing antique furniture for auctions and fund raisers. He saw a different possibility for the shoe, offering a $250 scholarship competition to Marshall High English students who wanted to try writing an essay, poem, or story about the shoe, now property of the Marshall Historical Society.

Though 30 years separated my hearing the two shoe stories, it felt like too much of a coincidence, and a little light research revealed it wasn’t. Placing a shoe in a wall, a floor, behind a chimney or above a door during construction is a tradition that dates back to the twelfth century.

Largely a European practice, particularly in the U.K., shoes were even placed beneath the choirstalls in England’s Winchester Cathedral, circa 1308. In fact, so many shoes have been found in England that the Northampton Museum keeps an “Index of Concealed Shoes” that lists over 2,000.

Buildings historians guess the concealed shoes originally served as magical charms to ward off witches, demons and ghosts, though a shoe placed under a bedroom floor may have been associated with fertility, (think old woman who lived in a shoe) which may also explain why shoes are traditionally tied to the bumpers of newlyweds’ cars.

In America, hiding a child’s shoe in the wall was a strong tradition mainly in the Northeast, but apparently the custom was carried all the way to the Midwest before evidently dying out in the mid-twentieth century.

Superstition or quaint custom, I see concealing a shoe in a wall as a poignant symbol of faith, of the confidence and of the risks that lie behind anyone’s notion to build or renovate a home. A concealed child’s shoe, scuffed, cracked and worn, is like the penny tossed into a fountain, a talisman of hope.

Ron Davis is a retired English teacher, freelance writer, columnist and author of “Shiny Side Up” and “Rubber Side Down,” two books about the improbable inclination to travel on two wheels.