A short, animated movie is getting lots of buzz on the film festival circuit this fall. It’s made in Milwaukee, and its main character is the iconic Hoan Bridge. The yellow and blue bridge soars over the Port of Milwaukee and Summerfest, connecting the south side to downtown. It’s known for stunning views of the city and Lake Michigan, but it’s also been the site of dozens of suicides. Aaron Johnson at his home in Oak Creek, Wisconsin. (Photo by Jane Hampden)

Johnson lives in Oak Creek, Wisconsin, which is a suburb just south of the city. He often takes Interstate 794, which goes over the Hoan Bridge into Milwaukee.

The first time was in April. Johnson drove by a young woman sitting at the edge of the bridge, along with an FBI agent and her vehicle.

“And that really hit home,” said Johnson. “It’s like when you drive past something like that, that close, it makes you really start to think.”

Then in August, he was driving home from a Brewers game. He saw a man, who appeared to be in his fifties, standing almost in the same spot over the edge of the railing while looking out.

“And so this was an excuse for me because I’m not an expert, I’m just an animator, a storyteller, to explore this topic on my own,” said Johnson. “I had no leads, and so the first thing I did is I placed a classified ad on Craigslist and I was soliciting anyone in the area with stories regarding the Hoan Bridge and suicide. Within 40 minutes, I had gotten an email response from a gentleman who had a story. And that was Dave.” Dave, who’s only identified by his first name in the movie, ended up sharing his story in “Hoan Bridge.”

I went out with this girl for seven years. You know she comes home one day and she’s like I just can’t do this anymore. It wasn’t until then that I started spiraling down. I was depressed and I had a motorcycle and I’m like, I was just cruising around one day.

I was driving over the Hoan and I was just like, man, I could crash right here and it would just look like an accident.

Johnson interviewed Dave and other subjects for about an hour and searched for the stories within those interviews.

He also interviewed Milwaukee Fire Department deputy chief John, who’s only identified by his first name in the movie, for the movie.

I saw a woman on top of the Hoan Bridge, bright red hair. You could see that she was in distress.

And I just reached out a hand and sat and talked to her and listened to her.

(What was the first thing that you said?)

Hello. All I had was a hello. It worked. Johnson wanted to tell a powerful story through animation, since he said it’s often assumed to be “cartoony, funny, exaggerated.” “You know, while I’m asking the questions I’m also studying their eyes, their mannerisms, and those things. It was my job as an animator to try to capture some of that,” said Johnson.

He adds, “You got this mammoth, giant bridge and then I’d be sitting it underneath it, sketching it. I included those scenes in the movie because I thought it was a great metaphor for this giant problem of mental health illness in this country. Where do we start with it? We’re bringing a large complicated topic down to a smaller place. One city, one bridge in one city.”

Johnson spent about two months making the film at home on his computer. “Hoan Alone” won Audience Favorite and Best Director awards at the Milwaukee Short Film Festival in September. It’s been featured across the country and will appear at film festivals in Weyauwega, Eau Claire, and Ashland this month. Johnson has shared the movie with mental health professionals and plans to make it available free after its festival run. 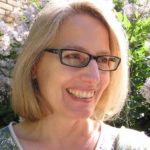 Jane Hampden teaches journalism at the University of Wisconsin-Milwaukee. Before that, she hosted a daily interview program on Milwaukee Public Radio and worked in TV news in Milwaukee and Denver.