A volunteer saws a layer of soft ice off a block of ice at the Historic Point Basse ice harvesting demonstration, Jan. 26, 2020 at Nepco Lake. “The crystal clear ice is the stuff that really keeps well,” said volunteer Mike Hittner. (Rob Mentzer/WPR)

In 1911, the Milwaukee-area manufacturer Alonzo Pauling gathered $75,000 in capital and founded the Pewaukee Lake Ice Company with his son, Harry. They bought 18 acres of land and started work building one of Wisconsin’s largest icehouses.

The massive structure could hold about 35,000 tons of ice. It had two elevators, one for loading and one for unloading ice blocks. There was a bunkhouse for the farmers and other laborers to sleep in during the harvest.

Ice had been a big business for decades in Wisconsin, and the Paulings saw no reason that wouldn’t continue. Milwaukee was a brewing capital. The brewers needed the ice Pauling could provide.

That is, until the breweries didn’t need to buy their ice anymore. By the 1920s, the breweries that did stay in business during Prohibition could all make their own ice. By 1930, the vacant icehouse “was allowed to collapse,” according to a 1965 story in the Wisconsin Magazine of History. The Pewaukee Lake Ice Company was gone.

Ice harvesting is a mostly forgotten trade. But for one day in January, volunteers with central Wisconsin’s Historic Point Basse gave it a try. Tony Whitefeather saws through the ice at the Historic Point Basse ice harvesting demonstration, Jan. 26, 2020. Whitefeather, an organic farmer in Custer, will use blocks of the ice to help preserve produce in his walk-in cooler. (Rob Mentzer/WPR)

“This is a labor of love,” said Mike Hittner, a volunteer and past president of the historical society. “We want to get the feeling of the sore muscles that they must have felt, and bring back something that was done years and years ago.” The group gathered at Wood County’s Nepco Lake during the Port Edwards Lions Club’s annual ice-fishing competition. On a relatively warm morning in a light fog, they brought out antique saws and tongs and set to work harvesting lake ice.

The saws that cut through the ice are massive — more than six feet tall. They’re three times thicker than a wood-cutting saw, and the teeth are set farther apart.

Once a block is cut free, it bobs up in the water. They use the tongs, with sharp hooks on either side, to drag it out.

It’s been a relatively warm winter this year, with a lot of slush and snow. That’s translated into a layer of about two inches at the top of the ice that’s cloudy and soft. That’s no good, Hittner said.

“The crystal clear ice is the stuff that really keeps well,” Hittner said.

This ice needs to keep until mid-summer, packed in nothing more than sawdust inside a modest wooden icehouse. So after the crew cuts the ice into cubes and drags the 60-pound blocks out of the water, a different set of volunteers saw and chip off that top layer. Volunteers use an array of antique tools to saw and chip the ice during the ice harvesting demonstration. (Rob Mentzer/WPR) Blocks of ice sit in the back of a truck as volunteers unload them into the Historic Point Basse icehouse, January 26, 2020. The blocks weigh about 60 pounds each. (Rob Mentzer/WPR)

Janet Heister, who lives nearby in Wisconsin Rapids, came out to watch the demonstration. She’s thinking about the workers in Wisconsin who used to do this every winter.

“I admire their work ethic,” she said. “They could’ve been sitting by the fireplace (instead).”

Ice was regularly being harvested and sold as a commodity by the 1850s. By later in the 19th century, it was a global trade — the third-largest export in the U.S. economy, behind cotton and grain. There were trade journals about innovations in cold storage where “Wisconsin and Maine ice was mentioned repeatedly … as representing the desirable standard of hardness and thickness,” according to the Wisconsin Magazine of History.

And the availability of ice changed people’s lives. Middle-class families used it to preserve meat and cool beverages. And by the mid-1800s, most also could afford a hand-cranked ice-cream maker.

The icehouse at the Historic Point Basse homestead is modeled after a shed from a Minnesota farm in the mid-1800s. It’s a couple of miles away from Nepco Lake, and once the ice blocks are cut and loaded into a truck, the volunteers drive over to unload the ice. The wooden icehouse at the Historic Point Basse homestead is modeled after a 19th-century shed, and offers no artificial cooling to help preserve the ice. (Rob Mentzer/WPR)

They arrange the blocks as tightly as possible, to avoid allowing warming air to creep in through the cracks. Then they cover each layer over in sawdust. Frost flies as Don Matthews, president of Historic Point Basse, chips at the ice blocks to ensure that they stack straight at the historic icehouse in Wood County, January 26, 2020. (Rob Mentzer/WPR)

Tony Whitefeather, an organic farmer with Whitefeather Farms in Custer, is one of the volunteers who cut the ice and helped unload it into the icehouse. He has an appreciation, he said, for the “tried-and-true, low-tech methods” of making the most of Wisconsin’s natural resources.

But it’s not just history for Whitefeather. Because the blocks need to sit flush with one another, Matthews rejects some misshapen blocks that weren’t cut straight or which had large divots accidentally chipped out of them. Whitefeather loads those blocks into the back of his truck. He’ll put them in the farm’s walk-in cooler and use them to keep his produce cold.

“It’s saved us a couple of months of electric bills,” Whitefeather said.

When all the blocks are stacked and sawdust-coated in the icehouse, the volunteers will fill the entire room with sawdust, on all sides of the massive, 7-foot-tall ice cube they’ve created. And there the ice will stay. They’ll be making ice cream with it this summer.

SONGS: “Footsteps In The Dark” by Karate Boogaloo 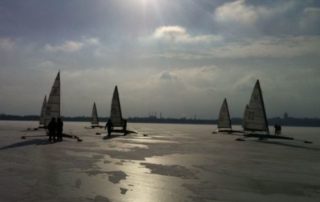