Matthew Hollingsworth is breaking the stereotype that you must work and live in Hollywood to make a living scoring film and television. “When you tell somebody that I score film, that I make music for film and television, it’s kind of like ‘Well you’re not out in Hollywood.’” In fact, he composes music from his very own home in Janesville, Wisconsin.

“I’ve always wanted to do this.” Hollingsworth says, “Just always been drawn to it. I love it so much.” Hollingsworth has always had a passion for music and has come a long way from his days as a toddler in a sailor suit playing on the piano. He explains how he had a little TV that had a video player. He would watch a movie, compose music for it and then try to sync them up. He’d rewind the videotape, press play and watch it. He says, “I would do that all day. I just always wanted to do music for film.” When I’m just creating, it just comes.” Hollingsworth explains, “I don’t think very much about it.”

While in school pursuing a social work degree, he turned down an offer for his music to be featured in a Super Bowl ad. He later redeemed himself. One of his most well-known works is a Super Bowl spot featuring Kim Kardashian in a T-Mobile commercial.

Viewers of WPT have heard his score on the program “Wisconsin From the Air.” He explains with “Wisconsin From the Air,” the music “can’t hide” because of the lack of dialogue, making this project different than others he’s worked on. While composing, he said, “You know, I love it so far. It’s so great. There’s so much that goes into it and I love it all.” 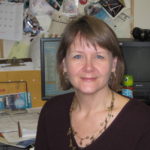 Laurie Gorman is Executive Producer of the History and Production Services unit. She has produced PBS Wisconsin’s “Wisconsin From the Air” programs and loves exploring and sharing the beauty of Wisconsin.