Journey To The Center Of Wisconsin

Editor’s Note: Jules Verne’s Journey to the Center of the Earth is a classic work of 19th century science fiction. After writer Alex Bledsoe shared the story with his son, the two found a local way to get inside the earth.

I’ve always read to my children, and started them on real stories as soon as I could.  A great source has been the “Classics Illustrated” series. It sports simplified text and an illustration on every facing page.  Some would call this bastardizing, but they’re missing the point: if your kid knows the basic story behind, say, “Moby Dick” or “Call of the Wild,” he or she will be better able to appreciate all the book’s other levels when it gets assigned in school.  And if you *really* want to put your kid to sleep, read them actual Melville.

So, anyway, when my oldest son Jacob was about five, I read him the Classics Illustrated version of Jules Verne’s “Journey to the Center of the Earth.”  Jacob loved it, and ultimately we read it four times before he learned to read himself, far outstripping the book in second place, “Treasure Island.”  I’m not sure what appealed to him so much about the Verne book, since mostly it’s about some German guys walking around a lot.  Yet both he and his younger brother listened to me read it over and over.

When we were about halfway through it the first time, I had an idea.  “Jake, you’ve never been to a real cave, have you?  Well, there’s one very close to us.  It’s called the Cave of the Mounds, and it’s open so people can go down into it.  We could see what it’s like for the people in the book to go down into a cave and explore it.  What do you think?”

Now, Jacob has never shied away from adventure, but this made his little five-year-old face turn as grim as Dostoyevsky–who, by the way, is not included in the Classics Illustrated library.  He was clearly going over the adventures of Professor Lindenbrook and crew that we’d encountered so far:  dehydration, poisonous gas, dinosaurs rampaging in an underground sea, and way too many mentions of the “bowels of the earth.”

Finally, he looked at me with the kind of dead serious expression that only a thoughtful five year old can muster and said, with great solemnity:

“You do realize we could die.”

Well, we didn’t die.  Instead, we had a great time at Cave of the Mounds.  And, since the cave was sealed off for millions of years before it was inadvertently blasted open in 1939, it contains no bats, no bugs, no blind cave fish, and no dinosaurs.  What it does have is a unique geologic beauty that quickly overcame Jacob’s worries.  We’ve gone there many times since, and each time we discover something new.  No giant cavemen herding mastodons, alas.  But we always have hope. 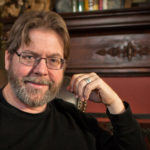