There are many ways to explore nature in the north woods and paddling a kayak down the Manitowish River is one of the best, especially when you’re joined by 20 of your best friends.

Every Thursday, a group of women known as the Lady Yakkers finds a new section of water to kayak. Melinda Pearce joined the group in 2003 when a neighbor invited her to come along. “It wasn’t so much the paddling. It was the ladies that were so awesome. They are just genuinely so nice. It’s the ladies that make the group.”

Now Pearce helps organize and schedule their trips. And they’re not afraid to tackle some rougher water. “I think ours is the adventure group. They’re always up to trying more rivers.”

There is always an opportunity to see some wildlife. “There’s certain people that are bird watchers and they can identify when they hear something,” says Pearce. “If you want to see the wildlife, you have to get in the front of this group because some people in this group just like to yak. That’s why we are the Lady Yakkers. Not that I want to admit that too much but it is well earned.”

Pearce says they put a new twist on the definition of silent sport. “Because we are not motorized it’s considered a silent sport. I understand that we do like to yak.”

But this is more than just a social outing. Pearce says there is empowerment in an all-woman group. “There are some women who are the strong women of the north woods and they want to be able to do these things without the help of men. A lot of the older ones are in the generation of; the husband is always there to help. They are finding that they can do this without them. It’s kind of nice for those ladies.”

Pearce is one of the few Lady Yakkers that is not retired. “Even working I made the condition of ‘I have to be free on Thursdays.’ So, no. Doctor appointments will never get in the way of my kayaking. This is a real part of my life now, for sure.”

She has no plans to give it up. “I use it as a decompression time. It’s like, relax, breathe in, look at the scenery, enjoy friends. I’m totally relaxed at the end of the day.” 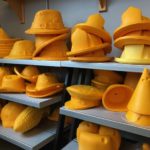 Why Do People Wear Cheeseheads?