Cinco de Mayo is the annual celebration of Mexican heritage, and one of the fastest growing holidays in America. Today, Wisconsin poet and school principal Oscar Mireles shares the story of his struggle to hold onto his first language Spanish. His poem is called “Lost and Found Language.”

It started in 1949, when my oldest brother
came home from school
in Racine, Wisconsin
after flunking kindergarten
because he ‘spoke no English’
and declared to my parents
that ‘the rest of the kids have to learn to speak English
if we planned on staying here in the United States.’

making a simple, but unspoken contract
that from then on
the parents would speak Spanish
and the children would respond
back only in English

how do you lose a native language?
does it get misplaced
in the recesses of your brain?
or does it never quite stick to the sides
of your mind?

for me it would always start
with the question
from a brown faced stranger
‘hables espanol? ’
which means
‘do you speak Spanish? ’

as I walked away
I know they were thinking
‘Who is this guy? ’
‘How can he not speak his mother’s tongue? ’
‘Where did he grow up anyways? ’
‘Doesn’t he have any pride
in knowing who he is? ’
or ‘Where he came from? ’

I tried to reply,
but as the words in Spanish
floated down from my brain
they caught in my teeth,
the rocks of shame.
I spoke in half-tongue.

and although
I still feel my heart jump a beat
when someone asks ‘hables espanol? ’
now the Spanish resonates within me
and echos back ‘si, y usted tambien? ’

and today as I talk with the Spanish speaking students
in our school
they can not only feel my words
they can feel my warm heart
splash ancient Spanish sounds off
my native tongue
that has finally grown whole again. 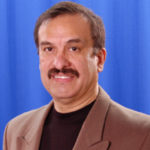 Oscar Mireles is the principal of Omega School in Madison. He’s been writing poems for 25 years and is the editor of two anthologies, called “I Didn’t Know There Were Latinos in Wisconsin.”