Meet The Athletes Who Ran For Six Days Straight

Jim Fiste of Cedarburg has been running for five days straight. He has 17 hours left and a goal of 250 miles.

With a mop of grey and white hair and full beard, he looks younger than his 77 years.

“Let’s see here, I have so many hours… what kind of pace do I need to keep to get to where I need to go…?” Fiste said.

It’s Friday, and so far, Fiste has gone more than 800 times around the track. That’s gotten him just under 223 miles. It’s a numbers game. And most of the 70 runners at the Pettit National Ice Center in Milwaukee are playing it.

They’re here from around the world to compete in the second edition of Six Days in the Dome. The first was held in 2014 at the Alaska Dome in Anchorage.

Race director Steve Durbin says when registration opened a year ago for this race, it filled in a day. Runners from Canada, Sweden, Mongolia, Japan, Australia and across the U.S. came to Milwaukee to participate. Durbin’s race management company has hosted dozens of ultrarunning events for the last 15 years, including the famed Barkley Fall Classic in Tennessee.

Durbin says the races have gotten more intense over the years because of social media.

Fiste was the only Wisconsin resident to participate in the event.

In the 1970s, Fiste gained what he describes as ‘a whole bunch of weight.’ So, he found an old pair of red Keds and ran around the block.

“I thought I was going to die,” he said. “But one thing leads to another. A friend of mine did this kind of thing and I thought, ‘Boy, that sounds interesting.’”

“I think there’s some bragging points to this,” he said. “You know, ‘I did a six-day,’ I think most non-runners really have a hard time figuring it out.”

Sally Libonati of Rotonda, Florida signed up for the six-day race because some friends were doing it. She also grew up in Little Chute, Wisconsin so she knew her family would cheer her on in Milwaukee.

Libonati, 44, is no stranger to long distance running. Before this, her longest race was over 200 miles in 55 hours.  And she’s headed to Virginia in a few weeks for a 100-mile race.

Nearing the end of the six-day race, she was tired. But said she was enjoying herself because of the camaraderie.

“It’s really nice that everyone helps everyone out,” she said while running around the track. “And really nice to get to talk to all the other runners. At some point, you are going to be next to one of them and learn about the other families and what brings everyone here.”

While the race attracted casual yet intense runners like Libonati and Fiste, ultra-runners were also circling the track. Results screen after Day 5 of Six Days in the Dome race. (Corri Hess/WPR)

As part of the six-day event, American ultra-runner and Wisconsin native Zach Bitter broke a world record at the Pettit, finishing 100 miles in 11 hours and 19 minutes.

That roughly means he ran four consecutive marathons in less than three hours each.

He fell short of doing it again in Milwaukee, running 532.6 miles.

You may be wondering how do these runners eat and sleep?  It varies. Some competitors limit themselves to 10-minute cat naps. Others, like Fiste, sleep a few hours each night.

As for food, anything goes. Some runners crave fried chicken or dairy. Fiste had a taste for something else.

“My wife brought me something that they don’t have here and that’s watermelon,” he said. “I love watermelon.”

Fiste and the others finally stopped running on Saturday afternoon. Fiste finished in 46th place. And he beat his goal with nearly 256 miles. Competitors were on the track for so long, a paper number had to be added to the clock. (Corrinne Hess/WPR) 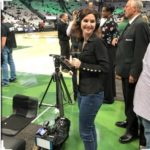 Corri Hess is the Milwaukee reporter for Wisconsin Public Radio. She has been on a mission to find the state’s best nachos.