Musician Madison Malone got her start at 16 playing in her uncle Kevin’s bar, Malone’s Blarney Stone. It’s in her hometown of Portage, Wisconsin.

“He said, ‘Hey, how about you come sing here,” said Malone. “I brought a karaoke machine with me and started singing in this bar.”

The pay? Fifty bucks and a slice of pizza.

That was followed by gigs at community festivals, like Canal Days or The Summer Music Concert Series. She did that throughout high school ⁠— plus more shows at bars and restaurants. Eventually, Malone dove into the Madison music scene while she was a student at University of Wisconsin.

Now, the singer-songwriter is making moves in Los Angeles. WPR’s Sarah Hopefl caught up with Malone to talk about her new EP, “I & II” and the simple love that helped influence it.

Sarah Hopefl: Did you have a specific moment in school or around that time where you knew you had to leave Wisconsin?

Madison Malone: I have an exact moment. I was working at the Dane County Juvenile Delinquent Center — it was an internship for the Social Work Program where I was helping register people who were coming in and going to juvie. I had to sit in on a couple of court cases.

The first court case I sat in on, this kid — who was like 13 — had shoplifted and had been in juvie the whole weekend. He comes into the courtroom in shackles and he’s crying. I’m sitting in the back of the room. He’s crying and his mom’s crying — this was his third or fourth time in. I took a breath and I looked out the window and I thought: I’ve wanted to make a change. That’s all I’ve ever wanted to do in my life, but I don’t think this is the type of change I can make. I don’t want to be involved in policy or law, so what else do I love? I was already doing music. I was already gigging, but I didn’t think about it as a profession until that day.

I want to make people feel better. I want to make the world a better place, and this [social work] is one way of doing it but it’s not my way of doing it. From that day onward, I geared myself towards…maybe I don’t have to finish my degrees. Maybe I can just do music because I’m already doing it. I’m already good at it, making a living out of it— let’s see what happens if I just go and pursue this passion and keep going.

SH: When you did move [to LA], I remember how quickly you were like, “This is where I’m supposed to be.” Did you expect that?

MM: It’s weird. I don’t think so. Everybody here is so creative. As soon as I got out there, it felt like I was in school all over again, but for something that was actually applicable.

I’d go to a show and I’d hear a song that would make me cry or make me feel emotion. I thought, “Ok how do I write a song that specific, that good so it does the same thing. So it’s delivered the same way.” Or I’d go to a comedy show — same thing. I was inspired.

I’m still inspired every single day, night, hour, whatever it is. As soon as I got out there I was like, “This is what I’ve been looking for!” I didn’t know until I got out there and was doing the thing. SH: You’ve said that being in that kind of environment — where everybody’s hustling — it’s hard not to hustle.

I gotta put up my best because everyone is doing the same, which is cool. It’s challenging, it’s like school. It’s like peer editing.

I wrote two songs there —”Fragile Heart“ and “Treehouse,” which ended up on this EP, but I kept them in my back pocket. I had written more songs and released songs in between then, but there was something missing in those two songs. “Fragile Heart,” for instance, is my voice and a piano, a little bit of ambient guitar. “Treehouse” had synth and a lot of harmonies and some cello and all this stuff, but I also heard it another way.

Almost a year and a half later, I thought I would make two versions of each of these songs. I came up with the idea to make a double EP. All the songs with a 1 at the end are more stripped down. All the songs with a 2 have the band, because I wanted to give that cinematic feel that I thought was missing from the acoustic-ish versions. Also, I wanted to give the intimate feelings that I thought were missing in the produced band versions.

SH: When you started writing the lyrics, did you go out thinking you’d be writing about home because you had just moved away?

MM: I actually just realized this the other day. All of those songs — I wrote in one day. A lot of times, I will start a song, come back to it. It might take years. It might take months ….but all five of these songs I wrote that day out of nowhere.

It’s weird, I always know when I’m going to write a song that I actually like because I feel like I have a headache. I don’t have a headache, but I’m annoyed. I’m frustrated. It feels like someone’s poking me with a stick…but then a song will come out and I’m like, “Oh I was trying to birth a creation. That’s what that was.”

SH: Like the feeling you get before you sneeze?

For “Home,” I was sitting at the kitchen table in Hollywood and I was missing my family. I thought about how that night, too, it smelled like Wisconsin. It was October and it smelled like a July night in Wisconsin and it brought back all these memories. I finished that song in like 20 minutes. Same with the other songs, they were all done in like 20 minutes. I was inspired right then and there and wrote the song.

SH: Tell me about “Simple Love.”

MM: “Simple Love” is my favorite song in the whole EP. The story of this is: I saw a tree and I thought it was so beautiful. I took a picture of the tree and sent it to my girlfriend and I told her I wanted to marry her under that tree.

Then, I went to take a shower and I’m sitting in that meditative state that we all get into, and all I could hear in my head was ‘I want to marry you under a tree’— that’s the line. That thing came out and I thought, “Ohhh heyyyy. Hey, that’s a songggg.” And I got out, turned the water off, wrote it all down.

I kind of just told the love story that I want and it’s also that I’ve witnessed with my parents and with certain other people. Just a simple love. Life can be crazy but when you go back at the end of the day you have that person to go home to. You can lay next to somebody in bed who’s a solid human, individual. It makes me cry and it’s my own song. That’s a weird feeling. It still feels new to me every time I hear it.

SH: What lyric on this EP are you most proud of?

MM: Most proud of: Quiet Down. It’s a short chorus, but:

Wanna show you all of me,
give you everything,
this is not easy.

That’s me talking about coming out and being pansexual, which just means you love people for people. It doesn’t matter their gender, you just love humans. I’m proud of that because I’ve known that my whole life.

But it wasn’t until I moved to LA where one — I accepted it within myself. Two — I was able to live it because I feel like everybody in LA… nobody cares. It’s like if your hair is purple it’s more interesting. Like, “Ohhh you have a girlfriend? Don’t care. Your hair is purple? Wow where did you get that it’s so cool.”

So I’m proud of that because I was able to express my actual feelings.

I don’t think it was until I moved to LA and realized how special we have it here in Wisconsin. You can walk down the street and people know your name. They might know your uncle or your grandpa. In LA, that doesn’t happen. Where I grew up [Portage] feels like a little fairy tale-weirdness because I knew everybody in that town. Everybody in that town knew my family, knew me. You really can’t get away with anything. There’s something special about that because it’s like, that’s community. They’re all taking care of you and learning from you and growing with you and I love that. Moving to LA, I was able to see how special it was. I think that’s why these songs about home — about Wisconsin — came to fruition because I was separated from it and then inspired to write about it. The people I met in Madison taught me so many important things. Going into LA, I knew how to navigate a meeting. I knew how to navigate my voice in a studio after recording at Paradyme Productions with Jake Johnson and Nathaniel Fores. I was able to go in and be like, ‘No no no I like my voice to sound like this,” or, “I like that microphone.” Instead of being in LA and being swallowed by it, I had a little mini crash course in Madison for the four college years.

LA feels like the homiest home because it’s not the place that built me, but it’s the place that let my wings soar. I’m able to fly and be who I am. Wisconsin gave me the grounded-ness, gave me all the tools I needed to live my life in LA. Now living in LA, I’m so grateful for the tools that I was given in Madison and Portage and wherever it was to be like, “Ok now go explore.” I’m able to take these amazing tools that were given to me in Wisconsin and use them in LA. 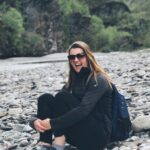 Sarah Hopefl is a technical director on WPR’s “Central Time” and a member of the station’s engineering team. She loves Wisconsin for its live music, craft beer, hiking and biking trails.