The Viking Cafe is Holmen High School's cafeteria, where food grown and raised by students is often served. (Liz Dohms/WPR)

The only time Holmen High School junior Gracie Kromke is exposed to the stereotypical bad lunch — rubber-roni, slapping food on plates — is when she hears stories about them.

“That’s nothing close to what I experience on a daily basis,” she said.

The Holmen School District nutrition program staff make sure of that. Through a partnership with the school’s Future Farmers of America program, or FFA, school lunches are stocked with food grown and raised by the school’s own students.

On a particular Thursday in November, students were treated to corkscrew pasta with their choice of Alfredo sauce or marinara sauce with meat. A sign notifies people who pass through the lunch line at Holmen High School that the marinara sauce was made with pork from pigs raised by FFA students. (Liz Dohms/WPR) A salad bar at Holmen High School is stocked with fresh fruits and vegetables, including some items grown in the school’s greenhouse. (Liz Dohms/WPR)

As part of the FFA program led by instructor Roger King, students raise cows, chickens and pigs that eventually head to slaughter. The meat returns to the school lunch program.

But even beyond that, the school recently expanded its hyper-local focus with a new greenhouse that produces spinach, lettuce, carrots, radishes and more all year round.

FFA student Lidea Lipinski, a senior who transferred to Holmen for its FFA program, said fellow classmates notice the FFA signs in the cafeteria, and she thinks that’s important.

“When the kids know that this lettuce was taken from our greenhouse and walked a couple of feet down and just rinsed off and now it’s on my plate, that…makes you feel healthy, makes you feel like you’re doing something in the community just by eating and supporting a farmer or a greenhouse in your school,” she said. Lydea Lipinski, a senior and member of Holmen High School’s FFA program, pulls a radish from a square bed. Radishes from that same bed were picked earlier in the morning for lunch that afternoon. (Liz Dohms/WPR)

When Holmen School District nutrition services supervisor Mike Gasper started in 2008, the high school was being served about 10 to 15 pounds of vegetables. That was for about 1,000 kids.

Now, the cafeteria serves on average more than 100 pounds.

And high school nutrition team lead Sarah Mumm, who’s in charge of the cafeteria, said about 90 percent of students participate in the lunch program. That’s compared to about 65 percent at the state level, Gasper said.

“We just have to change (perceptions) by showing people what we’re doing,” Mumm said. “Those internet pictures of what you find out there — an American meal and a school lunch — it just kills me because it’s so (inaccurate) of what we’re doing here.”

The district is planning to expand its cafeteria next year, which Mumm said is necessary because their current space just isn’t adequate.

“Our salad bar is crowded because they all want to get up there,” she said. “I think with our newfound space next year, we will have a higher percentage and more kids eating salad bar and fresh fruits and vegetables.” It Takes A Community

Getting locally-produced products into schools, an initiative called Farm2School, has been a practice in the district for about eight years.

Student involvement began in 2013, when a former student asked to set up a hydroponic system in a small greenhouse at the high school. She then asked if the school lunch program might be able to use the lettuce in its program.

The following year, another student asked if it would be possible to raise chickens. Gasper said he’d find out a way to do that. Things got a bit complicated with those regulations, but eventually Gasper found a way to make it work.

The school district chicken is sold to Fifth Season Co-op in Viroqua, which then sells it to Reinhardt Foods, one of the school district’s distributors. Reinhardt has the chicken processed at a USDA-inspected plant in Utica, Minn., returns it to a local warehouse from which Gasper can order it.

The harvested pigs raised by Holmen students are treated in much the same way, but through different partnerships the district has established, for example with the Hunger Task Force, which provides freezer space to store the meat. A student passes through the lunch line at Holmen High School on Thursday, Nov. 7, 2019 and gets pasta with marinara sauce with Italian sausage made with pork from pigs raised by FFA students. (Liz Dohms/WPR)

“That’s what our farm to school program has become, a community effort,” Gasper said.

Those relationships helped to build the greenhouse, too. Community donations flooded in once Gasper and King were able to secure grants to expand it.

Dedicated in March, the greenhouse is up and running with an aquaponics system, square bed gardens, a micro-green system.

“Aquaponics is the growth of plants and fish together in one system,” said Daniel Best-Kramski, a senior who manages the greenhouse including the plants, fertilization, growth and harvesting.

Best-Kramski said he learned to do that job through research and a lot of trial and error. He’s also often asking questions.

“I try to minimize annoying people, but I do ask a lot of questions,” he said with a laugh.

There are about 25 students in total who work somewhere on the spectrum of planting the seed — or raising the calves, piglets and chicks — to serving the food to fellow students.

Avery Bailey, a sophomore, is primarily involved with raising the beef animals for the farm to school program. But she recognizes the value of being able to connect students with their food growers.

“It’s a quality product. You know how it was produced and there’s no misconceptions about it, really,” she said. Junior Gracie Kromke said she normally eats from the cafeteria’s salad bar and grabs at least two fruits and a vegetable every day. (Liz Dohms/WPR)

Kromke loves the offerings. She normally eats a salad from the salad bar and grabs at least two fruit and a vegetable.

“I think knowing where food is coming form is always a huge proponent,” she said. “It encourages people to buy those school lunches because they know where it’s coming from. They know it’s healthy and locally-grown as well.”

Gasper said there is an extra cost associated with this type of meal service compared to other methods, but it some cases it’s cheaper. For example, the watermelon seeds that grew fruit that fed the students were donated to the district.

“But I also think the benefit that we have from a participation standpoint, you know, the parent buying that we have because of the things that we do and the educational aspect makes it completely worthwhile,” he said. 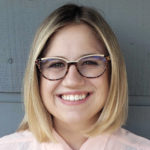 Liz Dohms-Harter is a digital content producer for Wisconsin Public Radio. She grew up on “Mister Roger’s Neighborhood” and Braunschweiger sandwiches. A native Wisconsinite, she’s terrible at skiing, walking on ice and cutting dairy out of her diet.