Brody Enli of Oshkosh is draped with Christmas lights as he sets up his annual holiday display that has already collected over $8,000 for charity. (Courtesy of the Enli family)

There’s a teenager in Oshkosh who’s had a lifelong love of Christmas lights, and has taken that passion to new heights with a choreographed light display that’s raised thousands of dollars for charity.

Thousands of Christmas lights flicker on an Oshkosh home, lining the roof and the windows, hanging from arches over the driveway and draped over bushes. There are even several light-up Christmas trees in the yard. The lights change to the tune of classic holiday songs.

The house belongs to the Enli family. Brody Enli is a 13-year-old who has been using his holiday light show to raise money for local charities over the last four holiday seasons. His project has been dubbed, “Brody’s Christmas Lights for Charity.”

Enli has decorated the exterior of his parents’ house since he was seven years old, but has been drawn to electronics for as long as he can remember.

“Ever since I was very young, I mean four or five, I’ve always been interested in electricity,” he said. “I was always playing with chords and stuff, and my parents decided — instead of not letting me mess with cords — to teach me the correct way to handle electricity and be safe.” 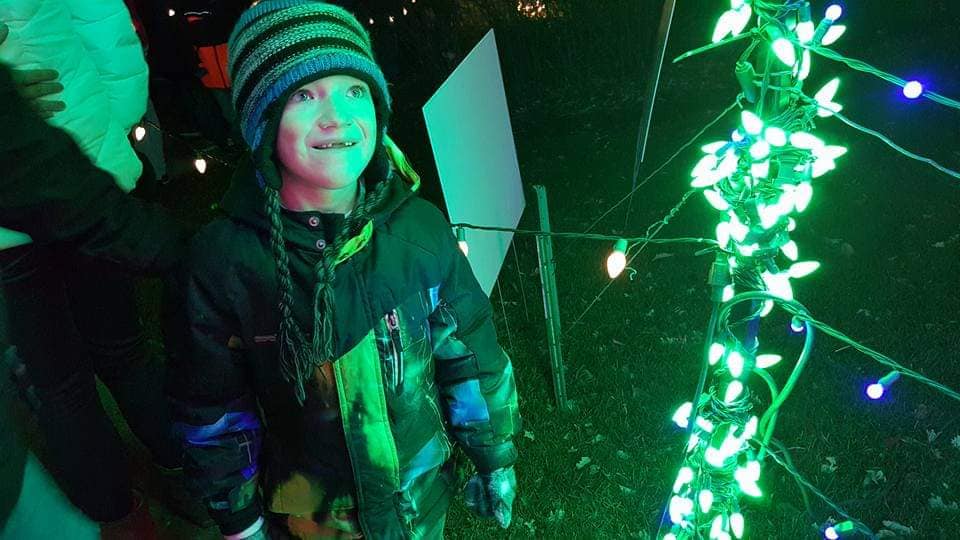 A young Brody Enli gazes with wonder at Christmas lights when his family visited the to the Green Bay Botanical Gardens Light Show several years ago. (Courtesy of the Enli family)

When he was nine, Enli created his first synchronized show, which served as a precursor for things to come.

“It was really just me plugging lights into a speaker box that would turn on and off with some outlets on it, and then play music aloud,” he said. “But the year after that, there was a lot more involvement.”

That’s when Enli upgraded the show, going from six outlets to turn lights on and off to 16. It’s also when he began using the show to support local charities.

“I really decided to do it for charity,” he said, “because I thought, ‘If I’m already putting up this light display, why not help the community as well?’”

This year’s show will benefit the Oshkosh United Way, Oshkosh Community Pantry and the Oshkosh Kids Foundation. Enli is collecting monetary donations, as well as books and non-perishable food items.

Since 2019, he’s raised over $8,000, collected almost 500 books and more than 1,000 pounds of food. This year, all monetary donations will be doubled through a matching gift.

“It’s pretty crazy to me,” Enli said. “I never could have even imagined being able to help out so many people.” 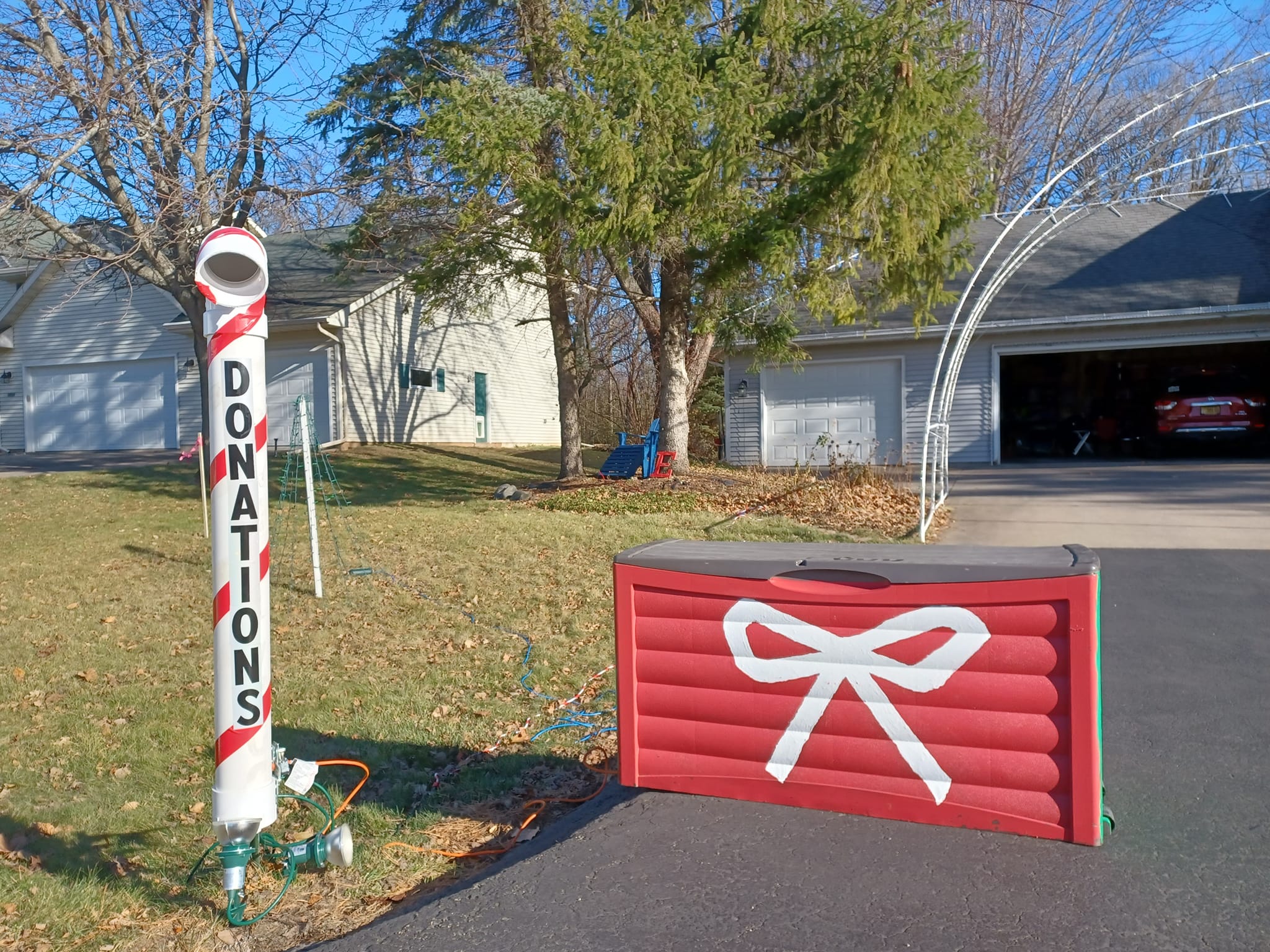 Those visiting Brody’s Christmas Lights for Charity use this super-sized candy cane near the gift box to deposit monetary donations, which benefits the Oshkosh Kids Foundation. (Courtesy of the Enli family)

Instead of the speaker outside, Enli now uses a radio transmitter with a small broadcast radius, so people can hear Christmas music from their vehicles.

Enli even recorded a message that plays every few songs for those watching his show, in which he explains why he creates the light display and the upgrades he made for this year’s show.

“First, Christmas lights make me smile and I hope my lights will make you smile too,” Enli says in the message. “Second, it gives me a chance to use my passion and abilities to do good in my community.”

Setting that station’s playlist is his first step each year. Then, he sequences the lights on the computer to ensure they line up with the music. 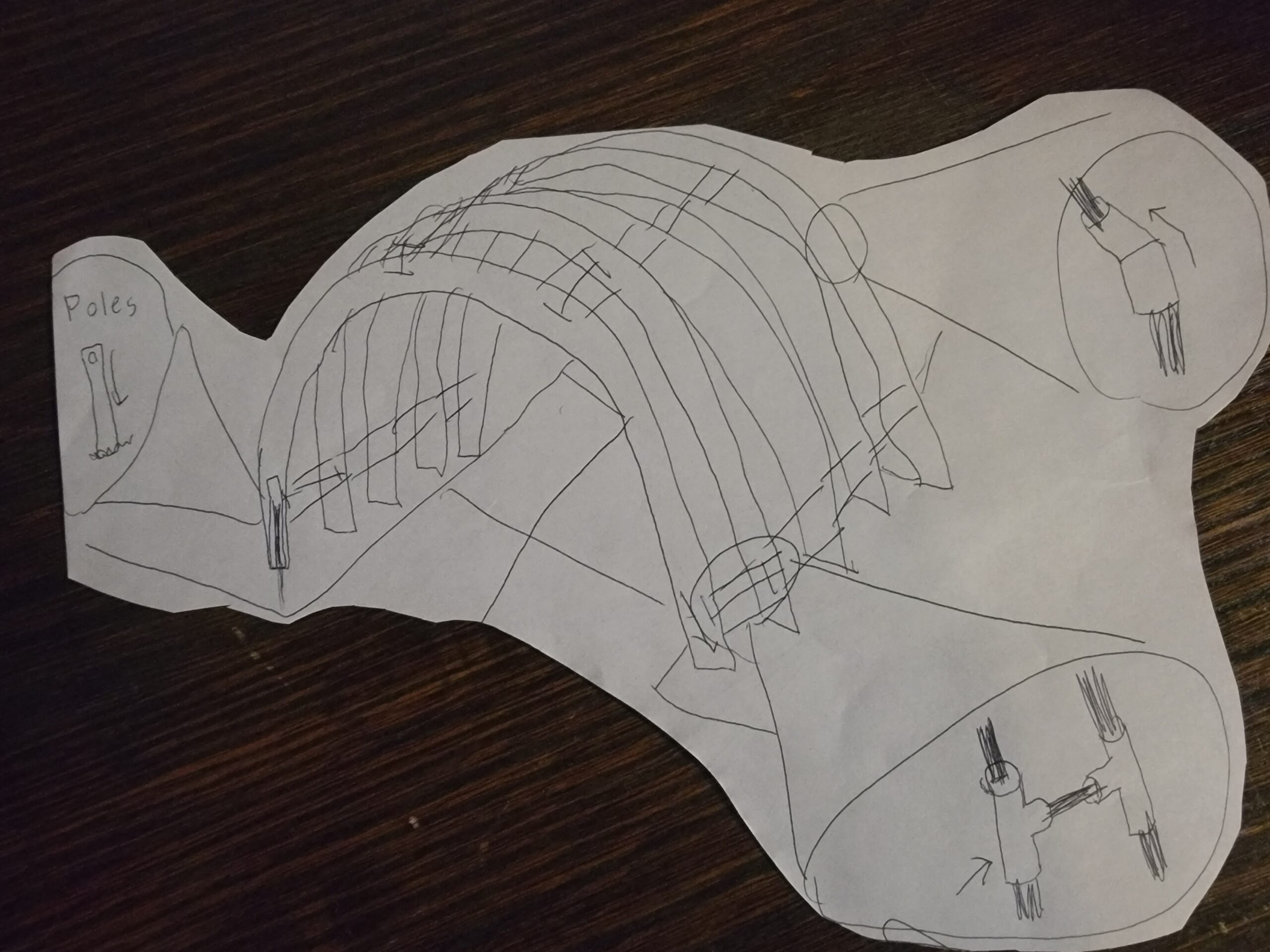 A schematic Brody Enli drew when he was 10-years-old. He was concepting the idea of the mega arches over the family’s driveway. (Courtesy of the Enli family)

“I have a group that is all of the RGB lights on my house — all the color changing lights — which I can put a fire effect on or layer them on top of each other to create more complicated effects,” Enli said. “And then do that all to the music.”

Each year, Enli tries to enhance his show by adding new elements. This year, he added new pixel lights to the outline of his house, and programmed four new songs for a total of 10 songs. He even recorded a Christmas message that plays between songs and explains his project.

Enli has put in about 300 hours of work into this year’s show. In fact, he’s been working on it since summer, and even used a 3D printer to create clips that mount lights to the roof of his house. He said there are a couple reasons the hard work pays off.

“Just the thought of being able to help out the community, and knowing that I’m really changing people’s lives (makes it rewarding),” Enli said. 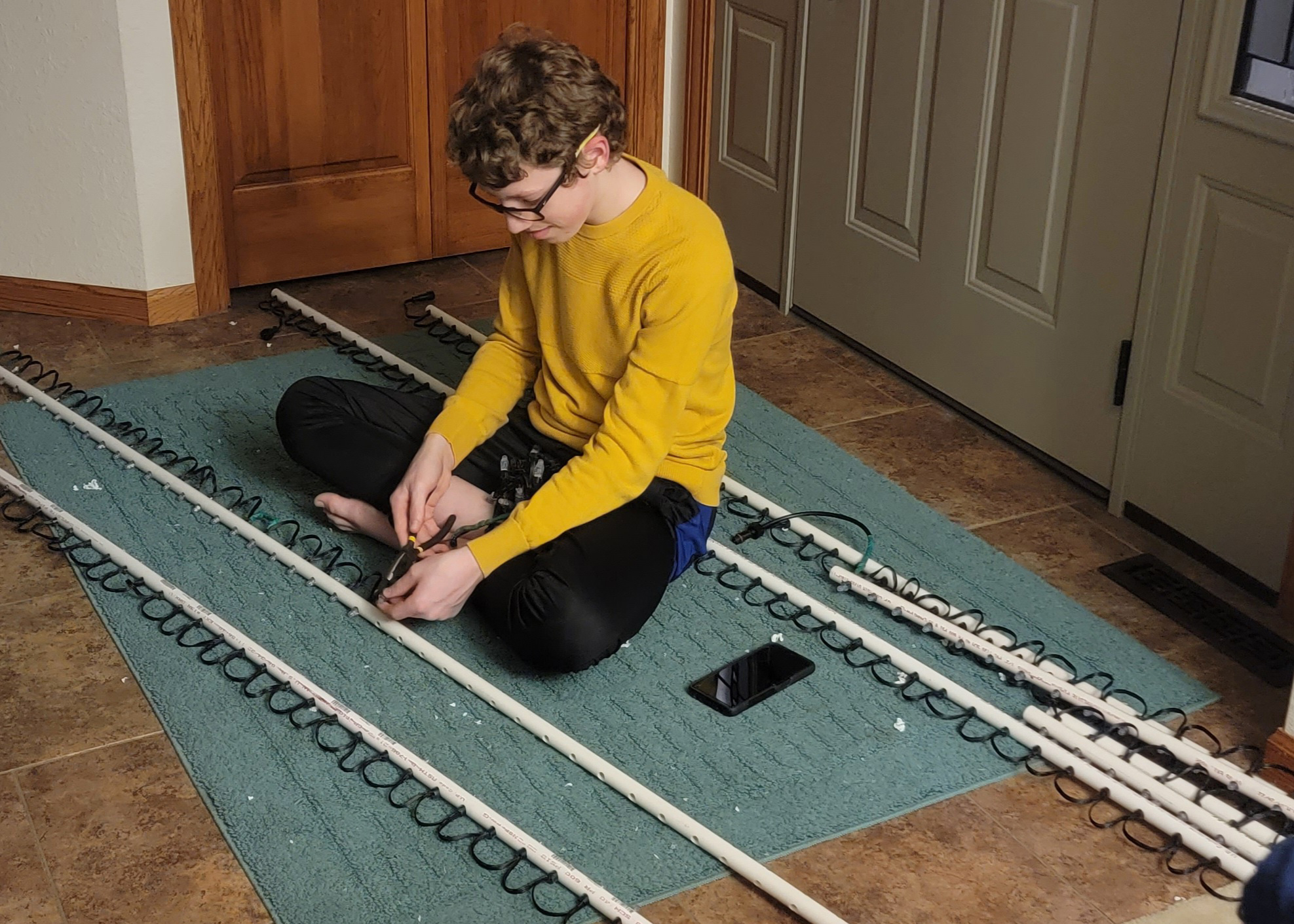 As for his parents, Bronson and Cindy Enli, they couldn’t be more proud.

“We’ve gotten a lot of great support from the people who come and see the show, and from a few corporate sponsors,” Bronson Enli said. “But it all adds together to really help out and I couldn’t be prouder.”

Likewise, Cindy Enli said she is thrilled to see all of her son’s work paying off.

“It’s great to see his passion really give back to the community and help people respond so generously,” she said.

But with so much technical know-how already, what are Enli’s dreams for the future?

“I have a lot of different career paths that I am interested in,” Enli said. “The biggest ones being, a computer scientist … or being a software engineer.”

Until then, Enli hopes to continue supporting the community with his holiday light display. 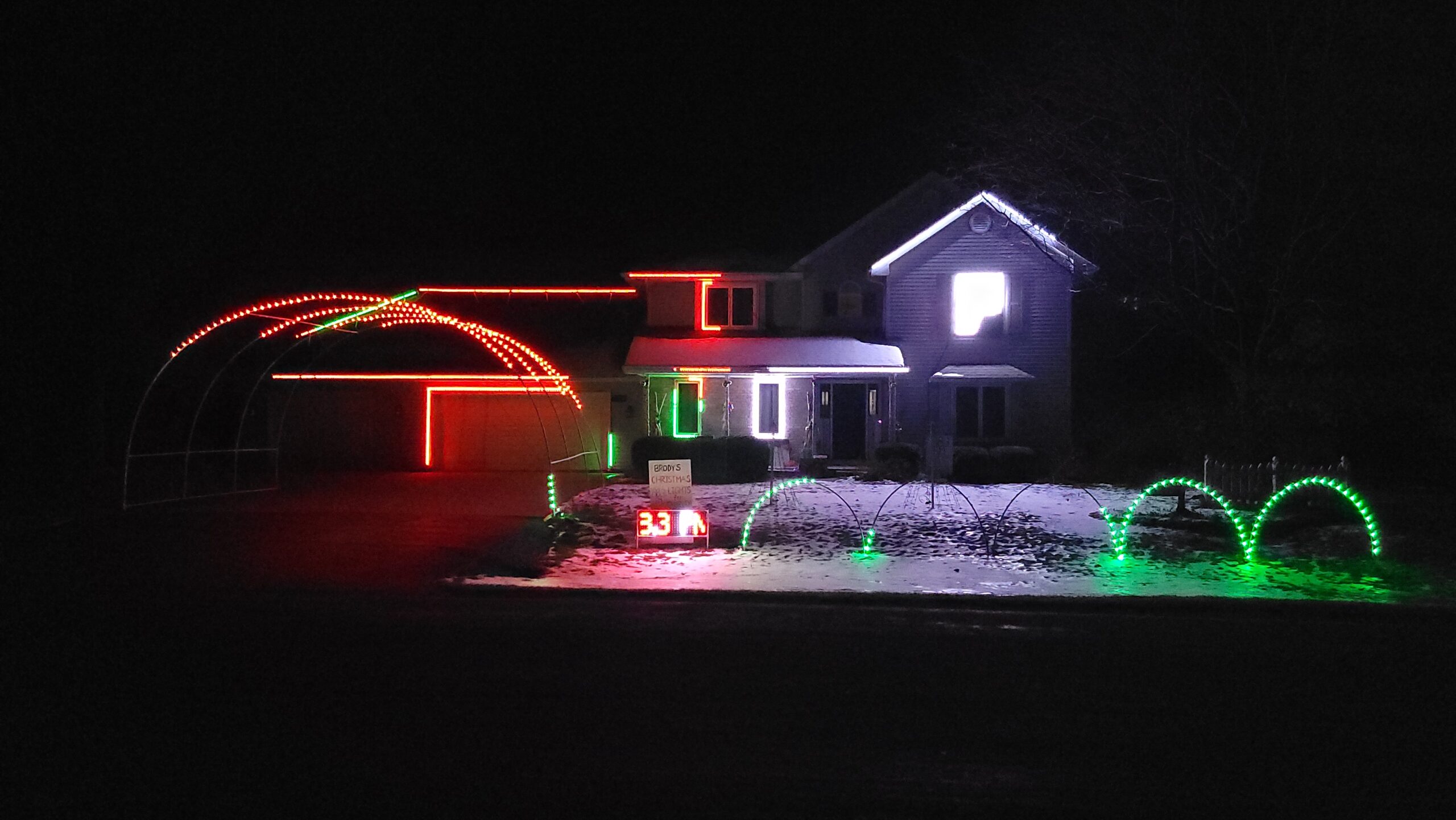 The Enli home is lit up with Christmas lights. 13-year-old Brody Enli spends much of the year preparing for his annual holiday light show that benefits local charities. (Courtesy of the Enli family) 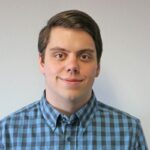 Joe Schulz is the Green Bay reporter for Wisconsin Public Radio. Born and raised in the Fox Valley, Joe is passionate about sharing his fellow Wisconsinites’ stories. He’s also a diehard Green Bay Packers fan and a Marvel comics aficionado.