GinGee Girls owner and artist Sunshine Levy shows off a mug she sandblasted alongside memorabilia from comic cons. (Photo by Victoria Davis)

People attending comic cons can expect to meet their favorite comic book creators, hear talks from famous actors in popular sci-fi movies and TV shows, and dress up in cosplay. And no convention is complete without a wide range of vendors filling booths and booths of stuff. They’re selling everything from boxes of comics to Star Wars figurines to swords.

One Wisconsin vendor who’s become in-demand at comic cons is Sunshine Levy, who sells sandblasted mugs across the country through her business GinGee Girls.

In her at-home basement studio in Kenosha, Levy sandblasts beer steins, shot glasses, wine glasses, whisky glasses and coffee mugs, all using a blasting cabinet and a hose filled with compressed air and sand grits. It’s a lot of tedious work with some heavy machinery.

“If your hand wavers, if you move a little too quick, you’re going to get a bumpy effect and not the smooth nice cut or the nice straight lines that you want,” said Levy.

It can also be dangerous.

“I’ve got nice big thick rubber gloves because if the grit were to hit your skin, it would burn off all your skin,” she added.

Walking down the stairs to her studio, there’s a box of shot glasses freshly sandblasted and decorated with pop-culture etches.

“People don’t realize that’s a lot to do on a little space,” said Levy. “That’s ‘Game of Thrones.’ That’s Stark and all his fur pieces. Then ‘Sailor Moon’ and Serenity. I’m only using 1.8 in² here, so it’s a lot of detail. You don’t do this overnight.” A “Game of Thrones” House of Stark sigil etched on to a shot glass created by GinGee Girls’ Sunshine Levy. (Photo by Victoria Davis)

Though she doesn’t glaze the mugs herself, Sunshine’s designs are all her own. While she takes any number of special design requests, it’s the television, comic and film fandom Levy is most known for.

Her etches of Harley Quinn, “Star Trek,” “The Goonies,” “Fallout” and countless others got Levy noticed by Renaissance fairs and at comic cons across the U.S., including ACE Comic Con in Chicago last year, where Levy was a first-time vendor. Since then, she’s sold her work at conventions in Tampa, Atlanta, and Charlotte.

“I think I’ll blast out a mug or two and see if they sell. It’s amazing where my life has like gone from there,” said Levy.

The name of Levy’s business honors her daughter, Danielle, who inspired it all.

When Levy gave birth to her daughter, the doctors said Levy’s baby would never walk and likely wouldn’t talk. But despite being born with cerebral palsy, hypotonia, OCD, ADHD and sensory disorder, Levy said her daughter is walking and talking just fine.

While everyday functions like riding a bike, holding a pencil and sleeping through the night are more challenging to Danielle than many kids her age, Levy said this hasn’t held her daughter back.

When Danielle was born, Levy was working for a local health care company. Her daughter’s physical therapy was a hefty time commitment and when Levy asked her supervisor for time off to devote to her daughter, she was told no.

“I was told that if I thought that my daughter was more important than my job, then that’s where I should be,” said Levy. “They bought out my contract.”

Levy said the experience left a “bitter taste” in her mouth for corporate America. So the following year, she took what was an artistic hobby and turned it into a full-fledged business, catering to her unending love for pop-culture. This is a passion Levy has passed onto her daughter, who continues to inspire Levy’s sandblasting designs.

“My daughter is just enamored with anything ‘Star Wars,’” said Levy. “With her OCD, she had to keep re-watching all the ‘Star Wars’ films in a row, which is why D-R2 came about. I would sit there and watch it over and over and over again” Sunshine Levy examines a box of shot glasses decorated with logos and characters she sandblasted. Behind her is her blasting cabinet. (Photo by Victoria Davis)

Levy’s work has won her awards and introduced her to a number of famous artists. Still Levy says her greatest reward has been watching Danielle fight for her own dreams. Her daughter is now nine years old. Levy said Danielle continues to inspire her every day.

“She falls down more than other kids, but she gets back up and that’s what’s truly important in life for any of us. When we fall down, we get back up.” 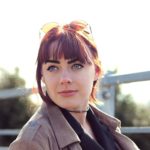 Victoria Davis is a multi-media freelance journalist for publications across the U.S. such as Isthmus, Capital Times, SDNews and Hidden Remote. A city girl through-and-through, Victoria loves all things arts and entertainment. She has a particular affinity for film and “geek culture,” spending most of her free time at the...