Forty years ago this week, the Edmund Fitzgerald sank in a storm on Lake Superior. It’s legend lives on, not least because of the famous song and the many lingering mysteries surrounding its demise, but also on the walls of Superior’s Anchor Bar.

In those days it was much different than now,” says Bean Prettie. “I came in right at, towards the end of the shipping, and the truckers, and you never knew what was going to happen. They came in and they gambled, and they worked hard, and they played hard, it was very interesting in those days.”

Since 1977, Bean Prettie has been the manager of the Anchor Bar and Grill. It’s an unassuming yet venerable tavern nestled in the northwest corner of Wisconsin’s northwestern-most city: Superior. Only blocks from a once-bustling but now decrepit industrial waterfront, the Anchor has reinvented itself alongside the Twin Ports it serves. Its burgers have become regional favorites, with a feature on the Food Network boosting its steady stream of tourists.

Adam Anderson co-owns the Anchor with his brother Aaron. Their parents purchased the tavern in 1977. Back then it was just a bar, and served no food. Before too long, though, the Anchor became an unsalted shrine to nautical knickknacks.

“A lot of people come up to Duluth just to visit, and now they’ll come across the bridge just to visit us,” says Anderson.

“I’ve always been a big junk, or big collector, at auctions, rummage sales. And I started his dad going to some, and all of a sudden we started buying stuff at auctions,” says Prettie of the bar’s decor.

Anderson describes the Anchor as “a little museum.”

The centerpiece of the Anchor’s collection is a lifebuoy. Displayed behind glass and darkened by age, the orange ring bears two faded words stamped around its top: Edmund Fitzgerald.

“A guy came in here once, and he had it for sale. The story is that he had it bought it from a woman whose husband was on the Fitzgerald, and she was using it as a boat bumper on her pier, and she wanted to sell it,” describes Prettie.

The Fitz, a Great Lakes ore boat, sank in a Lake Superior storm on November 10th, 1975. That was one day after it departed Superior. But this life ring wasn’t from that final voyage.

“Well, they got it before it sunk, you know. Um, I don’t know how long it was out of commission,” says Prettie.

Prettie purchased the life ring about a dozen years ago. She’s convinced it’s the real deal.

There are other life rings said to be from the Fitz. The Great Lakes Shipwreck Museum in Paradise in the U-P displays one, while the White River Light Station Museum in Whitehall, in lower Michigan, displays another. They don’t look the same. The former has white lettering and the latter black. The Anchor life ring’s letters are black.

“I’ve talked to some Coast Guard guys, and they told me that there’s only three in existence that they know of,” says Prettie. “But I’m not, I haven’t been able to verify it, but that’s what I was told.”

While the origins of the life ring are shrouded in memory, it and the stories still told about the Fitz and its crew speak to the legend and its lasting draw at the Anchor for locals and tourists alike. 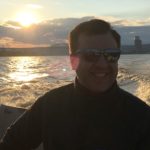