Moving away from Wisconsin can be an exciting adventure for some people. For others, it can be a tough and lonely journey. Writer and Wisconsin native June Melby reflects on the time she moved out west and how a vintage jacket helped her feel a little less homesick.

I had been living in Los Angeles for a couple of years, but it still didn’t feel like home. People were different from what I was used to back in the Midwest.  People bragged about themselves – openly– which came as a shock. Women dressed like teenage boys. Men groomed their hair with more products than I’d ever owned, and everyone checked their reflections in store windows as they walked past.

I was lonely. And probably homesick.

About this time my mother sent me a gift: a blue corduroy FFA jacket. Future Farmers of America said the emblem, and Waupaca, Wisconsin in gold embroidered letters on the back. Retro clothing was all the rage in Hollywood.  So, even though I had never actually been a member of Future Farmers, I wanted that jacket.  Zip front. Pockets. And a collar designed back in the 1930s and never updated.  Perfect for a night out in California when the desert air begins to chill.

And that’s when I noticed…

People recognized that jacket. Well, not all people.  But certain people. Namely, anyone who was from the Midwest.  Or grew up in a small town.  Or who also from Wisconsin.

At coffeehouses and comedy clubs.  “Are you from Wisconsin?”

At parties and theatre lobbies.  “Were you in FFA?”

My mom must have heard me say I wanted one. She put an ad in the local paper. Got two replies. A guy drove five miles out from town to hand the jacket over to my mom. “He wouldn’t even take any money!” she said, “I offered, but he was tickled that someone even wanted it.” But it’s the Midwest, and my mother didn’t believe you should take things for free.  We owned a miniature golf course, and she traded the jacket for free game cards, ten of them, so he could come play for free when it reopened next summer.“He was thrilled!” she said.

I didn’t wear it every night, but one thing was true. Every time I wore the blue FFA jacket I’d meet someone from the Midwest. They’d suddenly appear. Out of the crowd. Sometimes two or three.  And then we could talk about how odd it felt to be in Los Angeles.

“Isn’t it funny they call this winter?”

“My landlord’s wearing a parka!”

“A Walgreen’s near me sprayed their windows white to make it look like snow!”

Total strangers. Instantly close. Like long lost distant cousins. Talking about our hometowns. Where we were from.

What we shared was the secret of the blue corduroy jacket.  But there was something else we shared – the knowledge of what we each had left behind.  What we had given up.  To pursue these strange dreams.

At one point we’d look at each other and sigh. “Yes, well, I guess I’d better go.”

Then we’d wish each other luck on the next audition, or meeting, or attempt at landing a better day job.  “I hope you make it,” we confessed to each other, in a whisper.

“You too,” we whispered back.

And then we’d watch each other melt back into the crowd, and out the door into that strangely warm night. 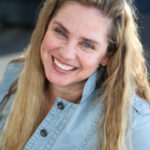 June Melby is a poet, performer, and the author of “My Family and Other Hazards,” a memoir about growing up on a 1950’s era miniature golf course in Waupaca, WI.  She lives in a log cabin in the woods.