Hannah Klapperich-Mueller has always had a love for three things; Wisconsin State Parks, Shakespeare and teaching.

As a Milwaukeean native she traveled the state with her family camping in State Parks along the way.  It was on one of these trips that she stumbled across a park feature that would later be the inspiration for Summit Players.

“I was camping with my family in Potawatomi State Park, up in Door County and my parents and I were walking through the camp ground and we came across one of those park amphitheaters”, Klapperich-Mueller says, “ever since I was young, I’ve been really fascinated by those.”

As a theater major, who studied Shakespeare, she wandered how she could put these park amphitheaters to different use besides the occasional naturalist program offered by the parks.

After graduating from Marquette University she contacted her old classmates and shared her idea to travel the State Parks as a performing group.  Their subject would be Shakespeare.  Irreverent Shakespeare.  With a minimal set and costumes these talented players perform Shakespeare with a modern twist.

“We want to get people out into the parks and start thinking of Shakespeare as something that’s fun and exciting. Rather than something that, when you’re in high school, you have to learn about it under these florescent lights and your books are dusty and you hate it,” she says.

An important part of their performances is educating young children and their families about theater.  The Summit Players provide workshops before each performance and introduce kids to the joy of Shakespeare and the wonder of the great outdoors.  Her greatest joy as a teacher is to make that connection with the kids.

“When I see a child, light in their eyes, playing with Shakespeare and speaking these words, that is so exciting to me. I just love knowing that here is someone who is going to have a fond memory of the name William Shakespeare and of theater”, says Klapperich-Mueller.

After their third year of performing the group is still going strong.

“My dream is that Shakespeare in the State Park becomes something that Wisconsin can be proud of and that happens annually long into the future”. 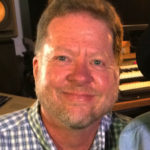 Steve Doebel is Executive Producer for Cultural Affairs at PBS Wisconsin. He produces stories for the “Wisconsin Life” project and is always looking for another great Wisconsin story to tell.