April Stone with one of her black ash baskets. (Photo by Tressa Versteeg)

As a member of the Bad River Band of Lake Superior Chippewa, she lives on the very south east corner of the Bad River Reservation in Northern Wisconsin. It’s there where the black ash basket maker gets her own materials from a nearby swamp. Harvesting the tree is a ritual.

“Make the offering, say the prayer, cut the tree down, carry it out of the woods on your shoulders, put it in your car and drive it up the hill,” said Stone. View of the summer and spring rings of the log. You can see the summer ring on the outside peeling off after pounding. (Photo by Tressa Versteeg.)

She pounds out the wood in her backyard.

“When you’re pounding a log, the pressure and the force of your pounder is disintegrating that spring ring which is sitting just underneath that summer ring that you’re pounding,” said Stone.

The summer layers peel off in long strips and are spliced to the right width. Then, Stone weaves them into sturdy baskets that can hold just about anything. Her latest creation is a burial basket. She laughs while saying it’s just like making a bigger basket.

Made to fit Stone’s stature, the coffin is 5 feet 7 inches long. “Burial baskets aren’t traditional Ojibwe craft,” said Stone. “This project is a statement about the Emerald Ash Borer. It’s gonna have a big impact on how I get resources and where I get them from. Right now, I go a quarter mile down the road and harvest from a swamp that I’ve been harvesting at for the last 20 years.”

When April started weaving in the late 1990s, the beetle wasn’t here. And there was no sign of native black ash basketry in the region. So, she taught herself through books and museums.

“I contacted the Great Lakes Indian Fish and Wildlife Commission  and I was like, ‘Where’s the native basket makers around here?’ And they’re like, ‘Well there really aren’t any.’ That’s when I started the search…what’s the history with ash basketry? And why isn’t it done now?” said Stone.

For years, she searched for a historical tie between black ash basketry and her community, with no luck. But turns out, the proof was right in front of her. She holds an old photo of a woman and baby in white dresses.

“So this my great-grandma and my grandma,” said Stone. “And there’s the black ash 8 on 8 round work basket on the table behind them. And I was like, ‘Hey look! There’s a basket!'” she said laughing.

Stone had the photo for ten years before she noticed the basket. “I was just focused on the ladies in the picture. All I know is, I love the fact that that is a black ash basket and I think I know those people.” Another clue is in the Ojibwe language itself.

“I was told like agimaak is the Ojibwe word for ash and it doesn’t mean ash tree. It has to do with the properties of the wood and how it works,” said Stone. She said it means “a bending wood,” for making baskets and snowshoes.

“They had name for everything that grew from the Earth and that name was a very descriptive name that does not translate into English at all,” said Stone. “It was a mindset. It’s like the language connects people to the landscape because we are people of the woods. I have a direct connection based on the fact that I make baskets.” Through teaching and workshops, it’s been no small task to reconnect the Ojibwe of northern Wisconsin to black ash basketry.

“Finally, five years later, ten years, 15 years later, people know me as the black ash basket maker. But it took time to educate people that: Remember? We used to make these?” said Stone. “But now it’s under a different context because now they’ve quarantined the whole state of Wisconsin. And the Emerald Ash Borer is going to be up here more easily. So this is the different context it’s under now: Hey our people wove with these! And guess what? The tree’s dying, you know?”

Stone wove the first version of the burial basket July 2017. She rewove the basket this summer to make it more compact. It will on display at the Minnesota History Center in St. Paul in 2019.

SONG: “Mist In The Woods” by Chris Doney, Beth Perry, and Daniel Smith 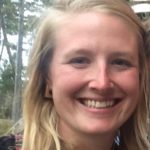 Tressa Versteeg is an independent producer with Midwestern roots. She makes radio about the intersection of geography, art, and human nature.