Instead, it represents a lifetime of achievement and learning. Brown’s love of curling began at a young age while growing up twenty miles north of La Crosse in Galesville.

“When I was in my backyard I had to take three steps, put my hand out and I could open the door to a little three-sheet curling club. I’ve been a rink rat since I was 6 years old,” Brown said.

After attending college and later leaving the military in 1971, Brown went on to represent the United States in four curling world championships. Following a successful playing career, Brown’s wife recruited him to coach the U.S. Paralympic curling team.

Brown’s wife had been instrumental in starting a national Paralympic curling program and had been responsible for both managing and coaching the team. At his wife’s request, Brown agreed to coach the team while she continued to oversee administrative tasks.

“I didn’t think I’d be very good at it, to tell you the truth, because I had never been around any disabled people,” Brown said. “So I was very hesitant, I was actually kind of scared going into the unknown.”

Brown quickly gained an appreciation for his new job though, describing the rewards of working with Paralympic athletes as immeasurable. The team has done well under Brown’s leadership, recently winning a gold medal at the U.S. Open while preparing for the 2016 Wheelchair Curling Championship in Switzerland.

“Each and every one of these athletes I work with is so positive, it’s incredible,” Brown said. “I say this over and over and over, but I have learned far, far more from my wheelchair athletes than I’ve been able to teach them without a question.”

U.S. Paralympic coach and former world-champion curler Steve Brown describes how being an elite curling athlete has turned into a family affair. 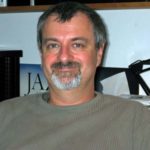 James Gill is the staff photographer for Wisconsin Public Television. He has worked for WPT since 1980. A Milwaukee native and Madison resident he enjoys the northwoods, biking and kayaking.