Brown trout on a prince below a hopper. It was caught on the West Fork of the Kickapoo River. (Photo by Tom Hart)

Trout fishing conjures an image of sparkling sunlight reflecting on a rushing stream and a fisherman in hip boots confidently whipping his pole and casting a line into the moving water. Early trout season, which is catch and release only, runs from January to early May. That image is a little different. Ron Davis paints us this picture of a father and son trout fishing expedition in March.

It was futile. A stinging March wind gusting across Timber Coulee Creek and my cataract-clouded eyes made threading a hair-thin tippet into the eye of a trout fly no larger than a peppercorn practically impossible.

I thought wistfully of the warm car and thermos of coffee waiting up on Olstad Road. My son, Kellen, perhaps sensing my impending retreat, sloshed up the creek.

“Having a problem?” he asked. Yes, I was having a problem, but it was nothing that magically wiping away 30 of my 65 years wouldn’t fix. “Here, let me do that.” He quickly tied off the fly, then said, “Cast right there, just behind those rocks.” While he watched, I tried some self-conscious false casts and rolled the line down. It was immediately clear I’d wind-knotted my leader into a little mess of monofilament around the tiny nymph, rendering my offering to any trout looking for breakfast, preposterous.

I reeled in and began playing cat’s cradle with the tangled web. My son rolled his eyes and held out his hands.  He untangled the knots, deftly looped my fly into the eddy behind a pile of fieldstones, and handed me my rod. Soon, I splashed out a little Brookie. The inevitable reversal had happened: child had become father to man.

As Kellen headed back downstream, I remembered taking him trout fishing for the first time. It was the May opener. He was nine, and I’d roused him before dawn with the promise of doughnuts and hot chocolate. We bumped a few miles west on Nottleson Road in my old pickup to the upper reach of Peterson Creek, narrow enough at that point to jump over with a few running steps. Blundering down through the muck and emerging skunk cabbage, I showed Kellen how to point his rod backwards to avoid snagging in the tag alders that clawed at our jackets and pants. I cautioned him to walk softly. Browns and Brookies hiding in the undercut bank spooked easily.

In the gathering dawn, I skewered on half of a nightcrawler we’d pilfered in the back yard the night before, and I tried to explain how to gently flip the split-shotted rig just up from the undercut so the current would push it under, out of sight, where the fish lived. His first effort was clumsy and left the worm in plain sight on the sandy bottom, but I was shocked to see a nice trout flash out, grab it, and dart back under the bank. “He’s got it, pull him out!” With one of my hands on the rod, we lifted and swung Kellen’s first trout into the grassy hummocks behind us.

Back on the Timber Coulee, I continued lunging up and down the slippery banks on a bad knee, snagging flies in overhanging branches and spooking trout after trout with my ridiculous impersonation of a fly fisher. Mumbling grumpy responses to any offers of help, I had to wonder why Kellen would want to take this old man fishing. Later, though it pained me, I muttered a begrudging thank you for his nursemaiding me around. “Hey, he said, “how many times have you done the same for me?”

Of course, he was right, but somehow, the return for those kindnesses is not something I’d ever sought…or ever thought I’d need. 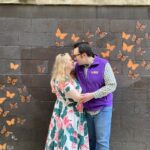