Gretchen Treu has always had a passion for literature. Growing up in rural Wisconsin, books gave them a chance to experience worlds beyond imagining. “I was always pushing whatever I was reading onto my close friends, and we would forge kind of a little community around the stories that we were bringing to each other,” they said.

It was this community and passion that contributed to them hanging out at A Room of Ones Own in Madison, Wisconsin. And, after many years of work, they found themself in a position to become a co-owner of the historical feminist bookstore. However, their time as co-owner has not been without struggle.

Eight months into the COVID-19 pandemic, Treu received news that would change the course of the bookstore. While discussing this Treu said, “Our landlord indicated that they were not going to be renewing the lease. There was no option and that they are selling the building.” Treu then began to work with their team to move the bookstore to a new location, and with a new location came an opportunity to create something all their own.

“I knew it was going to be a lot of work, but it’s been kind of exciting to have the opportunity to really make something that’s ours from the beginning.” This new sentiment has been met with some pushback by those who have historically been patrons, but Treu still holds respect for the historical aspects of their business.

“I try to have respect for the store’s history and I try to make space for people who remember it in a certain way. While still holding firm that this is a store that has always tried to be progressive and you can’t be progressive if you’re not progressing,” Treu said. They also have a respect for the community around them and the power of books to amplify the voices of those who often go unheard. 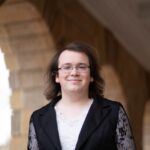 Lynn Sill is a student Producer for the “Wisconsin Life” project and she enjoys sharing the stories of people far and wide across Wisconsin!