Trees grow out of a cliff on the Niagara Escarpment on Sunday, Oct. 17, 2021, in Greenleaf, Wis. Angela Major/WPR

Close your eyes and imagine the oldest tree in Wisconsin.

When I would do this, I used to picture something like a massive red oak with limbs the size of telephone poles, or a towering white pine missed by the loggers of the 19th Century.

But that’s not it at all.

The oldest known tree in Wisconsin is a scrawny, scrubby little red cedar growing out of the side of a cliff. It’s not majestic. Actually, it’s so unremarkable that it’s easy to miss.

I should know. I might’ve missed it myself, even when — after years of searching for it — this tree was right in front of me. 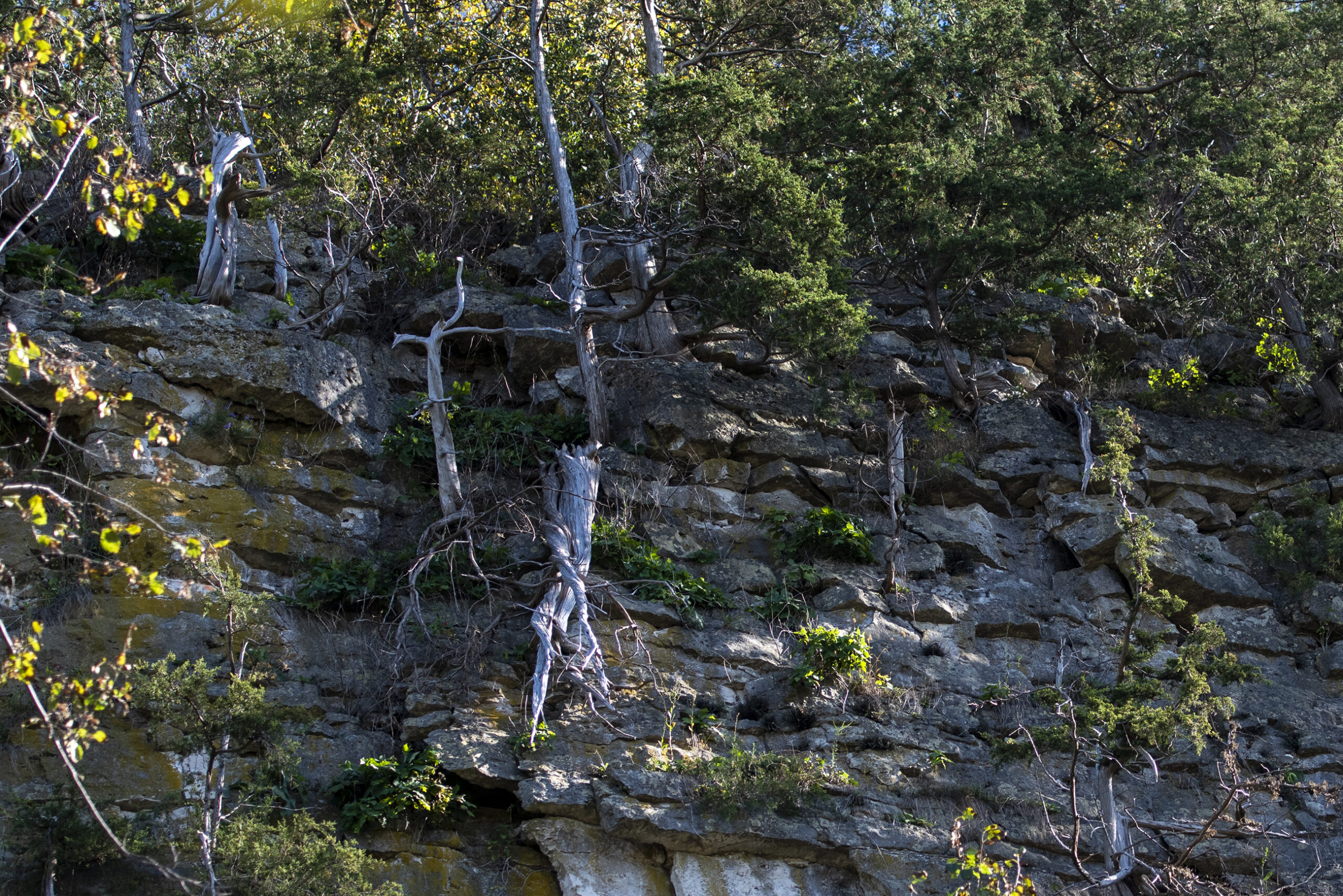 Trees grow out of a cliff on the Niagara Escarpment on Sunday, Oct. 17, 2021, in Greenleaf, Wis. Angela Major/WPR

I got interested in the tree about four years ago. I was working for a newspaper at the time, and I thought it would be interesting to track down the oldest tree in a state known for its forests. As I started to report, I came across stories in the Green Bay Press-Gazette and the Associated Press from 1997, when a Canadian scientist had discovered a tree in Brown County that his lab dated back to the early 700s.

Douglas Larson, a now-retired Canadian biologist, would publish a book-length study called “Cliff Ecology” that showed that cliffs all over the world support some of the oldest, slowest-growing life on earth. He sampled cliffside trees across North America, Europe and Asia, and he routinely found trees that were more than 1,000 years old. In France, he took a core sample from a dead tree that had lived for nearly 2,000 years.

None of these trees is much to look at — the Wisconsin tree was just 9 feet tall and 10 inches in diameter and inverted, growing downward — but they are impossibly ancient. A giant oak or pine tree like the one I had imagined might be a few hundred years old. This Wisconsin tree had lived four times that long.

I spent months trying to find the tree Larson had sampled. I knew it was on private property in Greenleaf, an unincorporated village south of Green Bay, and I knew it was on the Niagara Escarpment, a cliff system that snakes through Wisconsin. But I never actually found it.

I wrote a story about it anyway. And after that story published, I gave up the search. 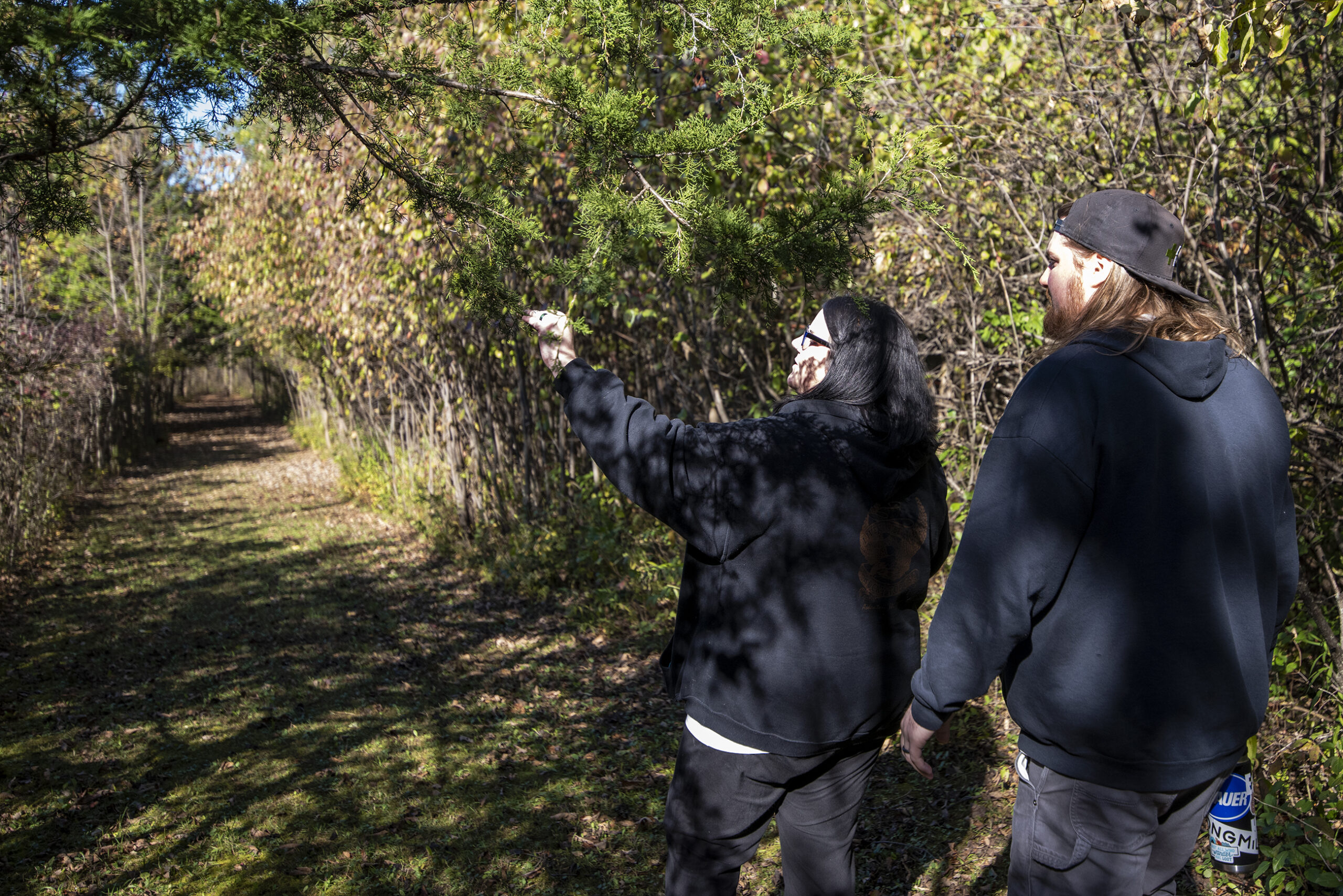 Jodi Davies and her partner Clayton LaCroix begin their search for the oldest tree in Wisconsin on Sunday, Oct. 17, 2021, in Greenleaf, Wis. Angela Major/WPR

I didn’t know it, but the story would kick off someone else’s search. Jodi Davies read my story, and she got interested in the tree the same way I had. She had recently made some big changes in her life. She took her three kids on nearly a yearlong road trip in a converted school bus. In Utah, she met her partner Clayton LaCroix and his daughter, and brought him back to Wisconsin. They opened Earthy Herbs Cannapothecary, a cannabis shop in Wrightstown. And the shop, she said, gave her “a lot of access to the public.”

“I was literally asking everyone who would come in, ‘Have you heard of this tree? Do you know where it is?’” she said.

She struck out for a long time. Until, she said, one of her customers essentially told her, yeah, I know where it is. I can even take you out there.

In September, Jodi sent me a message on Facebook. She introduced herself and said she had seen my story in 2019.

“I was wondering if you ever were contacted about the tree’s location,” she wrote. “We are having a small field trip to the tree. Would you be interested in attending?”

I wrote her back in less than a minute. I was very interested. 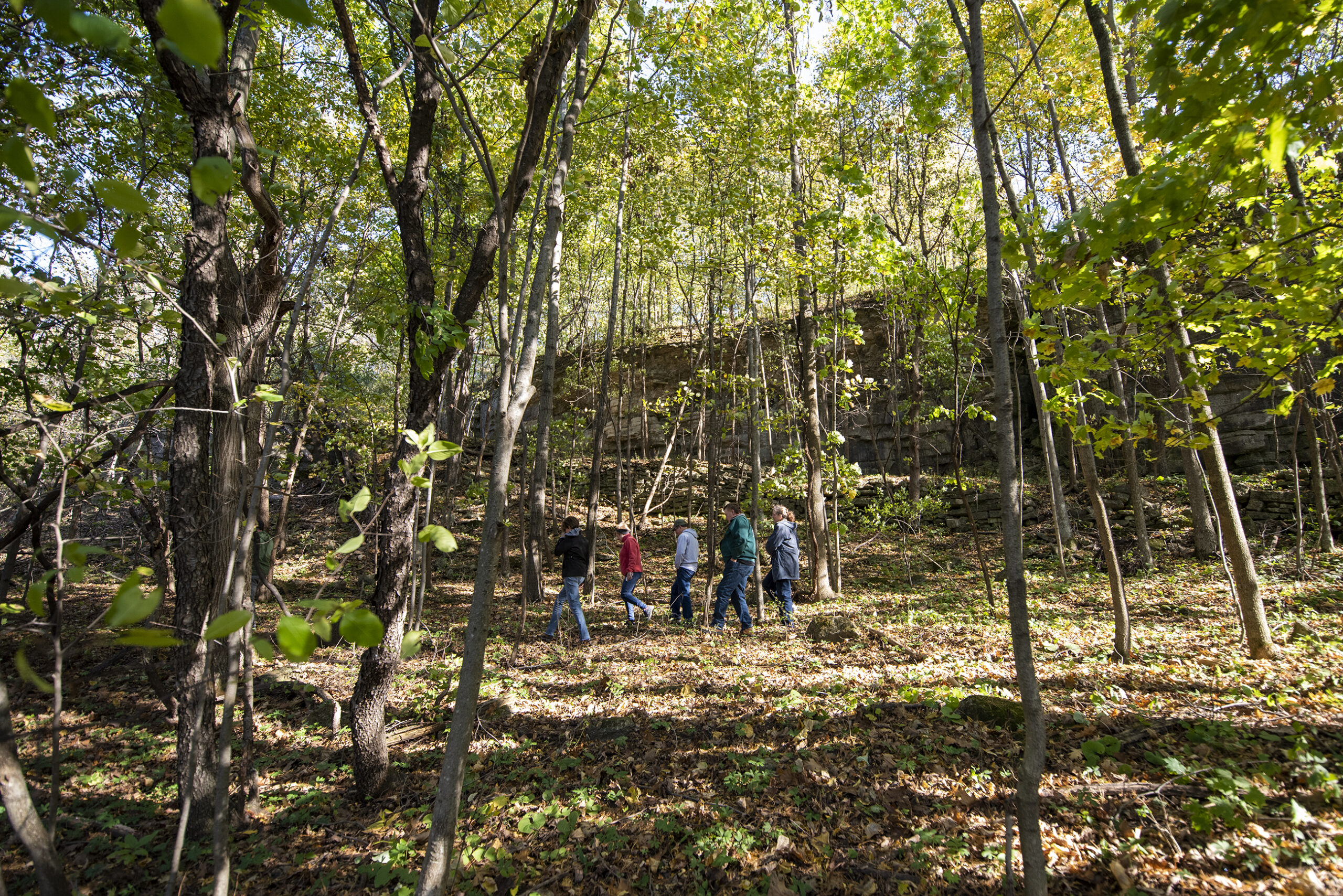 A small group travels through a wooded area in search of the oldest tree in the state Sunday, Oct. 17, 2021, in Greenleaf, Wis. Angela Major/WPR

In October, a small group of us gathered at the Wrightstown Fire Station to watch a documentary about the Niagara Escarpment before setting out on a hike to finally, after years, lay eyes on this famous tree.

Hundreds of millions of years ago, the Niagara Escarpment was the shoreline of a prehistoric lake. The same cliffs that create Niagara Falls in upstate New York wind through Ontario and down through Door County and Brown County in Wisconsin. The Niagara Escarpment Resource Network promotes “geotourism” and leads excursions around the ledge regularly. Director Eric Fowle spoke to the group about its history and place in Wisconsin.

It did occur to me that, while Jodi and I were obsessed with a 1,300-year-old tree, we were staring at rock formations that date back some 430 million years. What counts as ancient to a biologist would probably be very funny to a geologist.

But as Larson told me in 2019, “You can hug a tree.” We just relate differently to a tree.

Jodi in particular had an almost spiritual feeling about it.

“I’m way into the woo,” she said. “I hear the energy around it is palpable.”

There were two problems, which became apparent as we hiked out to look at the tree.

The first was that the path to it was blocked. A tornado system that tore across northeast Wisconsin in 2013 had uprooted trees and destroyed paths, making hiking along the bottom of the ledge impossible.

The second problem was that the cliffs are huge. They are hundreds of feet high. Identifying a particular tree – one less than a foot in diameter at its trunk – would have been hard from the very base of the ledge. And we couldn’t get that close. 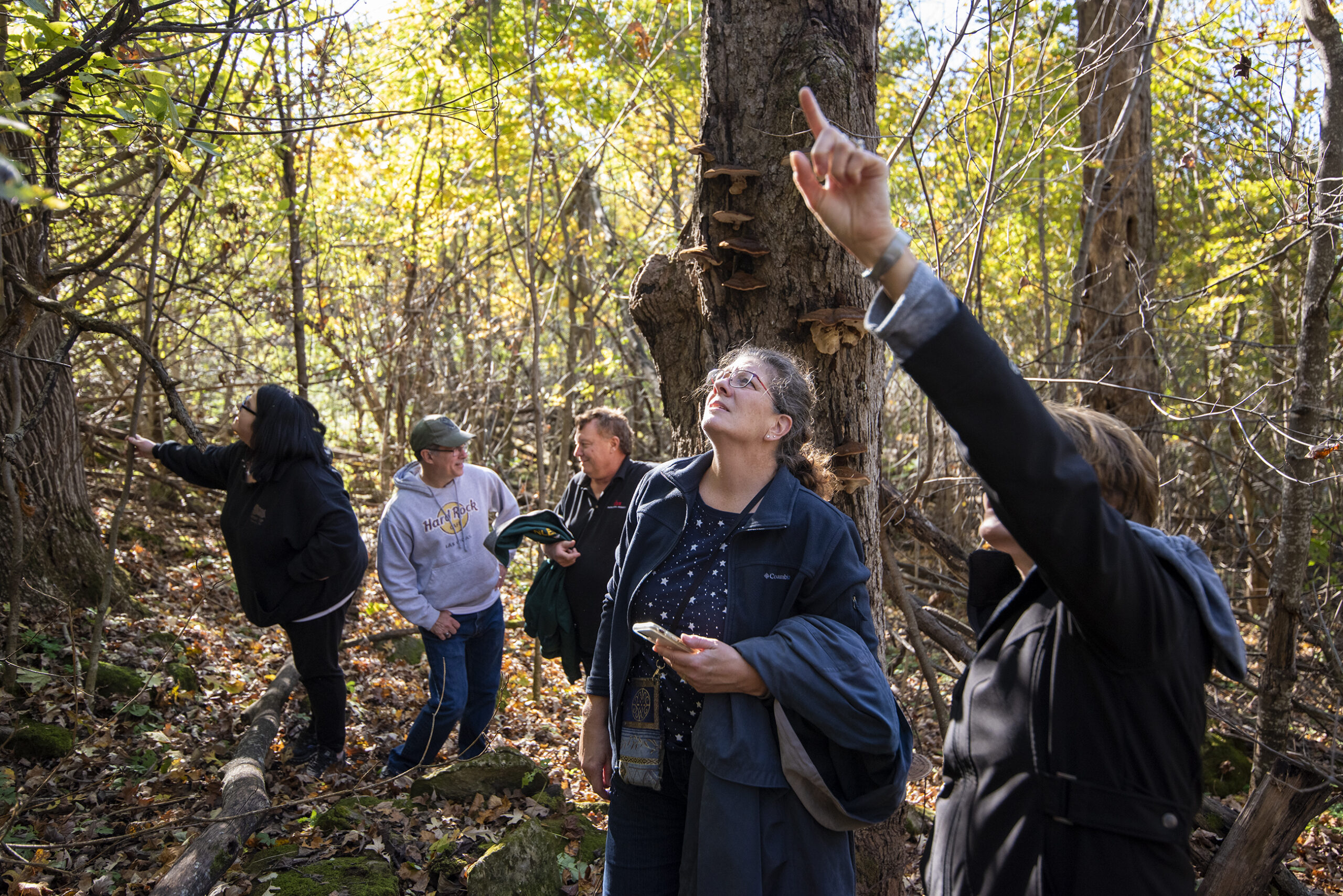 People look up through tree branches to see the oldest tree in the state Sunday, Oct. 17, 2021, in Greenleaf, Wis. Angela Major/WPR

When we reached the part of the ledge where the tree had been found, one of the hike’s hosts, Dennis Beining, let us use his binoculars. For a few minutes, we debated about which one of the scrubby little trees growing out of the side of the cliff might have been the tree. Was it that one that the sun was shining on? Maybe the one just above that, and a little to the left?

It was one of them. We were in the right place, and the trees fit the description. We just weren’t sure which one fit it best.

That was as close as we got. After years of looking, we found the tree. But it was hard to feel exactly triumphant.

We spent the hike back convincing ourselves that we had accomplished the mission.

Why can a scrawny little cedar tree growing from the side of a cliff live for 1,300 years? The face of a cliff is a terrible place to grow. It doesn’t get much water or sunlight. There’s no rich soil for its roots to take hold in.

Cliff-dwelling trees “never do have a good year,” Larson told me in 2019. “All the years are equally bad.”

But these trees have a secret. When you’re growing from the side of a cliff, no one bothers you. Most of the time, people can’t even find you.

But Jodi and I did find the tree. We did lay our eyes on it. We’re sure we did. Pretty sure. 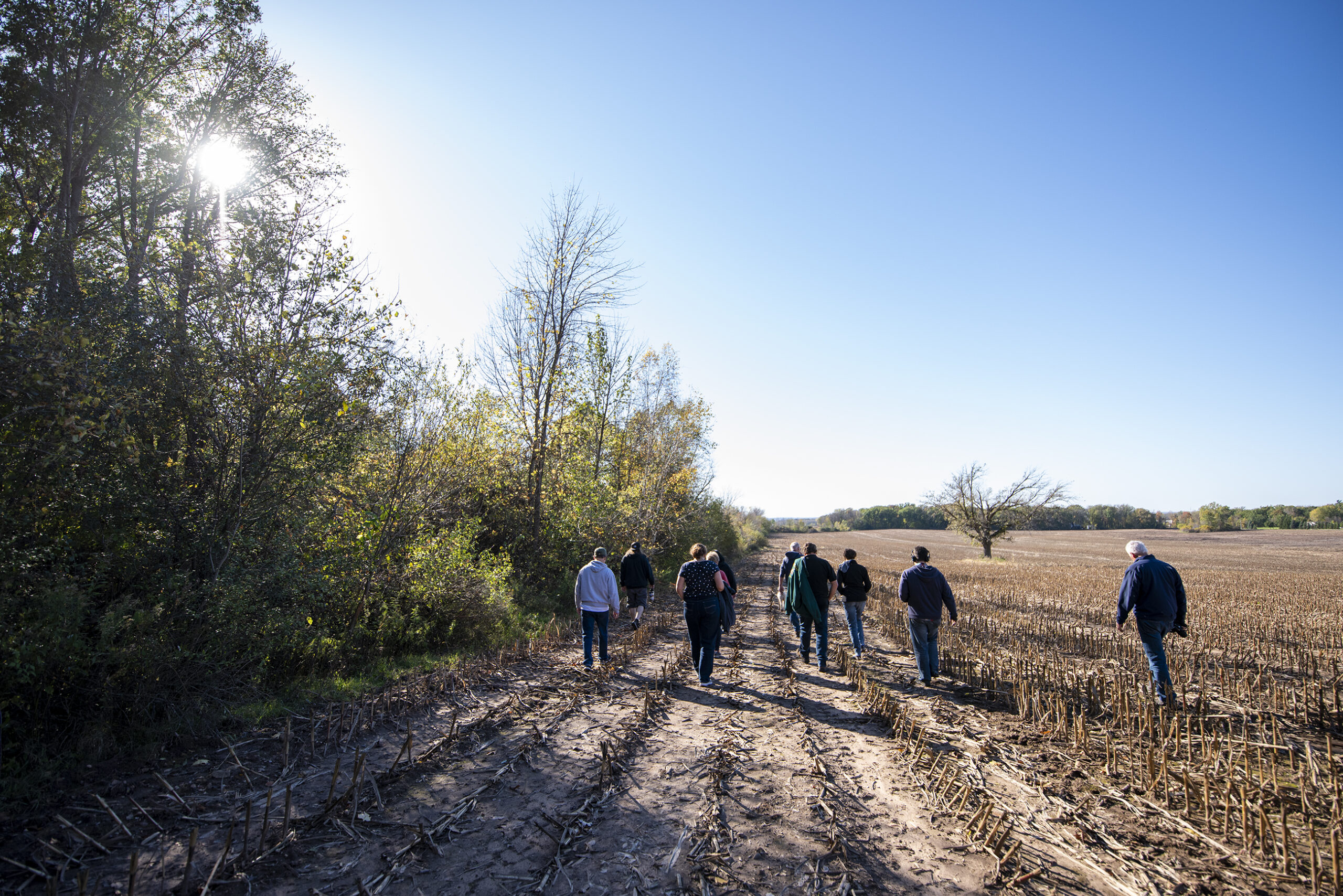 The group passes through a corn field after their journey to find the oldest tree in the state Sunday, Oct. 17, 2021, in Greenleaf, Wis. Angela Major/WPR