Believe it or not, not everyone agrees when it comes to politics. And in the current political climate those differences are especially amplified when trying to have these discussions with family.

Waukesha writer, Judy Bridges walks us though the complex arc of navigating politics and finding common ground with her distant brother.

My brother lives three thousand miles away from me, in Alaska, where he built a successful business while his wife raised the children. My brother and I were close as kids. Not so close during the middle, busy years. And now good friends again. Except for politics, where he is “The Great White Hunter” and I’m “The Bra Burner.”

I never actually burned a bra. And he doesn’t hunt anymore. Still, we are far Left, far Right — the difference that’s torn so many friends and families apart. Especially now, when smart, decent, people are convinced of opposing sets of facts. Our whole country is lined up on one side or the other, and the sides are more likely to spit at each other than talk over the fence.

Like it or not, we need to find paths we can walk together. It’s clear that we aren’t going to argue this out. I can’t convince my brother of my thinking and he can’t convince me of his. All that happens when we try is that we back each other into corners we aren’t going to come out of. The issues are too hot. Our convictions too ingrained. The best we can do is just be together.

Earlier this year my brother asked for my opinion. He said everyone in his circle thinks the way he does, he knows I think differently and he respects me enough to ask the questions. We tried, both of us. We knew that once upon a time we could talk and come to consensus. Not anymore. Our language had become loaded. Sentences we thought were neutral were unwitting attempts to convince.

We swore off politics. Conversations became thinner, and less frequent.

One day I found a photo of us taken when we were kids and our biggest disagreement was who beat who in a bike race. I posted the pic on Facebook with this caption:

“The love we share is deeper than the distance between us. This photo was taken the year after my mom married his dad and we got each other in the bargain. Politically, we’re miles apart, but we’d each take a bullet for the other.”

The posting opened the door again. For a while. Then silence. I sent him a note, “Let’s not let politics stand in the way of love. How about we connect at least once a week?”

He agreed. Now our conversations go something like this:

That’s it, plus updates on his antique autos and my book sales.

Will we switch sides? Probably not. But we have cleared a path we can walk together. There is kindness. There is love. There is hope. And a big bubbling pot of bean soup. 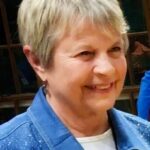 Judy Bridges is a writer who lived from coast to coast and returned to Wisconsin convinced there really is no place like home. She founded Redbird Writing Studio in Milwaukee in 1993, and included much of her writing wisdom in her good-natured guide to the craft, Shut Up & Write!