Editor’s note: Dr. Evermor turned bits of metal and other salvaged parts into fantastic sculptures. People can find his truly one-of-a-kind works of art behind Delaney’s Surplus near Baraboo. Starting in 1983, he created a whole world of mechanical creatures, insects, birds, and other contraptions. Dr. Evermor, or Tom Every, passed away on March 30, 2020 at age 81. To remember him, we’re going to revisit this story from a few years ago, when reporter Gilman Halsted went to talk with the artist about his sculptures.

There is something spiritual about the towering metal sculptures created by a Wisconsin artist who has become a myth in his own lifetime. His work includes huge metal birds and a massive spaceship poised to take its creator into the heavens.

“I am Tom Every from Brooklyn, Wisconsin: the junk dealer — and now I am Dr. Evermor: the crazy guy, ok?”

Just outside of Baraboo, Wisconsin, Dr. Evermor has built a few thousand tons of sculpture. He spent years running a salvage and demolition company. He saved industrial machinery parts from the more than 300 factories, breweries, power plants and rail cars he dismantled. He collected other pieces. Convinced these obsolete pieces of metal were imbued with spirit of their original creators, Evermor decided to make them into pieces of art that embodied that spirit.

“We’re working with preexisting shapes and forms that lose their original identity, become something else without altering any of them,” Evermor said. “That is one of the ten commandments, ok? So when we look at something, it’s plenty good the way it is now. How can we use it?” Dr. Evermor has created a myth about himself and his art. It begins with is first and most ambitious work: the Forevertron.

“I am a slight rebel and I don’t particularly like certain entities which I don’t really care to name — such as the establishment,” Evermor said laughing. “I thought I could get back into the heavens away from the entities that we normally know. That’s how this thing came from. This is designed to perpetuate yourself back into the heavens in a glass ball, in a copper egg, on a magnetic lightning force beam. It is a could-be fantasy, that’s what it is. But it’s built of the real material.”

The Forevertron is like a whimsical spaceship welded together from a conglomeration of industrial detritus. It includes a 6,000-pound transformer from an old power house dam in Prairie Du Sac, a huge compressor from a power plant in Sheboygan and what the doctor calls a “decontamination chamber.” It was actually used by Apollo astronauts.

The Forevertron weighs more than 300 tons. Built in the 1980s with a help of a few friends, it’s the centerpiece of his sculpture park nestled in a grove of cottonwood trees on Highway 12 in Sauk County. It’s across the road from the old Badger Army Ammunition plant. It’s surrounded by an assortment of huge metal birds with long ostrich-like necks and elaborate crowns of metal feathers. Evermor calls them “the Gawker birds.”

“See! They stick their necks out because they’re looking at that UFO landing there,” Evermor said. “Those are Gawker birds.”

In another meadow, there are more metal birds with musical instruments welded into their bodies: guitars, French horns, saxophones, trumpets. The feathers on these birds are flattened pieces of metal that can be played like chimes. They stand watching the Forevertron ready to strike up the band when it’s time for its celestial voyage. But before he takes off, Dr. Evermor would like to pass on some of his skills to metal artists with their own visions. There is an assortment of what he calls teahouses strategically located at various places around the sculpture park. He envisions them as workstations for budding metal sculptors.

“I looked at it as being working areas so they could have as an individual thing and say, ‘I am doing it!’” Evermor said. “All we have is hope for the future generations. All I can leave anybody is not any big bank account or anything else. I say unto you or anybody else, ‘You can do it! POWER ON!’” 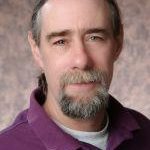 Gilman Halsted is Wisconsin Public Radio’s former Criminal Justice reporter in Madison, who retired in 2016. He serves on the board of WORT-FM in Madison and keeps his hand in the radio business by filling in as a guest host on WORT’s public affairs programs. 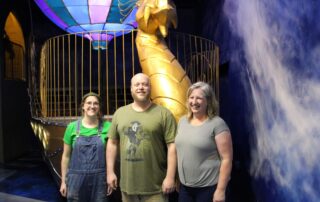