Drumming is much more than just music to Yorel Lashley.  It’s the vehicle to teaching children the importance of discipline, community and leadership.

Lashley is the founder of Drum Power, a leadership development program for children and youth using West African, Afro-Brazilian and Afro-Cuban percussion. Drum Power also features a three-week summer camp every year on the campus of UW-Madison.

Lashley started drumming as a child when in Liberia with his family. There he met and trained with a master in Djembe drumming. “I got my first taste of the power of the sound and heard it and decided I wanted to try to pursue it,” Lashley remembers.

It took years of practice and training to expand his knowledge of drumming and its various styles. While traveling from Africa to Chicago to Madison to New York, he also discovered another passion: connecting and teaching children.

“I had been meditating on trying to figure out a way to get back to being directly working with young people and also thinking, ‘Well, now I’m a musician. Is there a way to bring those two things together?’ And I start to think, ‘Well, maybe I could teach drumming,’” Lashley says.

Lashley says Drum Power isn’t just learning how to drum. It’s also providing a foundation of concepts to build not just music but also life. “I have some parents who said that the drumming was the one thing that their children felt successful in,” Lashley says. “And that really wasn’t about the drumming. That was about having a certain level of consistent support, the space to define themselves and to be cared for.”

Lashley feels the program isn’t about whether the children become good drummers or dancers. To him, it’s the avenue to teach that success isn’t measured by the end product. Instead success is in the process of learning and doing.

“It’s the smiles and the moments of triumph I can see on their faces and in their spirits and in the way they hold their bodies,” he says. “I’m looking for vitality, meaning that extra bit of light.” 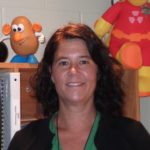