Customers in an Eau Claire coffee shop are the unsuspecting subjects in one of Nishant Jain’s sketches. As he draws, Jain said he looks for different ways to connect objects with each other, like stacking them. (Courtesy of Nishant Jain)

Two men sat in a Chicago Starbucks with a chessboard between them, quickly moving the pawns to and fro. Unbeknownst to them, their animated motions and competitive spirit drew an onlooker. He pulled out a piece of paper, uncapped his pen and began inking the scene they created.

Nishant Jain, the artist, was making Sneaky Art, though he didn’t call it that then. Jain had recently resettled in Chicago, a city that inspired him to leave his doctorate studies in neuroscience behind to become a writer-illustrator.

“I was two years into my PhD program, about halfway through,” said Jain. “It just struck me that I’m wasting too much time. I’m trying to get a degree that I don’t really care for, that if left to me entirely, I would not pursue further. So, that’s when I decided I was going to quit.” His mother and father, back in Calcutta, India, took the news surprisingly well, Jain said. They were just happy he was chasing his passions, even if that meant he was defying the expectations set for his generation.

Jain got to work perfecting his craft. He wanted to fine-tune the connection between what he saw and what he could draw. So he doodled everything, filling sketchbooks with skylines and people and sculptures — all without announcing his presence.

“I decided that, you know, being sneaky was not about ‘Oh you can’t draw, so you should hide it,’ which is how it began,” said Jain. “It was also offering me this insight into people without alerting them to it, so they were their natural selves.”

Now, four years and nearly 3,000 Instagram followers later, Jain must be as sneaky as he was in that Chicago Starbucks, because no one’s discovered him in action.

One mid-June day, Jain was in a park in Eau Claire, where he now lives. Park-goers didn’t seem to notice him, though he was perched atop a concrete terrace, daintily documenting the surrounding hubbub with a yellow fountain pen.

He drew the scene that appeared around him. The sun shined violently bright on couples reclined on the grass, splitting fish tacos. Three children passed a sticky bottle of orange pop back and forth. Dogs sniffed curiously at each other.

“There’s a lot of beautiful things all around us,” said Jain, resting his pen for a second. “Sneaky Art is my way of appreciating beauty in these ordinary things, like today. Here. An ordinary place, and ordinary people living ordinary lives. But I feel like what I’ve learned from watching them and trying to make art of it is that even in these ordinary lives, all of us are locked in these moments of accidental beauty — not something that was planned, but something that’s just there.” The afternoon’s illustration is just one of many that fill 12 of Jain’s sketchbooks. Now, they also appear online, in print and in a recently-published book called “Sneaky Art of Eau Claire.”

Eau Claire is unlike anywhere Jain’s lived before. He said it’s small compared to the cities of his past, like Calcutta and Amsterdam.

According to the United States Census Bureau, the northern Wisconsin city is more than 90 percent white. Jain said the community is welcoming, but it often takes a while for others to understand his background and the difference between an immigrant and an expat.

“I wish there were more people like me around here. That would make it easier to be sneaky. I think it’s tough to be sneaky when you’re the only brown guy in a big park, but I do my best,” said Jain. “The act of drawing [people in Eau Claire], it does bring me a lot closer to them, in a sense. And I appreciate that fact. It makes it easier for me to be out here, even though I don’t know anybody, I feel friendlier toward them.”

When faced with new environments, Jain said he uses his art practice to gain a sense of his surroundings. That’s why drawings of locations across Eau Claire are common in his sketchbooks. They’re moments he’s cemented in time, like the old theater or the downtown construction project. Nishant Jain holds his sketchbook to show his interpretation of a factory near downtown Eau Claire. He recently taught a class on urban sketching in Chicago and visited a local high school to talk about his work in June. (Courtesy of Nishant Jain) Though he doesn’t know how long he’ll live in Eau Claire, he said the city will always have a special place in his heart, because it’s where he made his first sales as an artist.

On Saturday mornings, Jain and his wife, Smita, set up a tent at the Eau Claire’s Artist Market. Jain greets each passerby, all the while drawing. A few drift into the tent and leaf through his prints.

Jain said the support he’s received from his patrons remind him the value of his work.

“Seeing the world through different people’s eyes helps you appreciate a lot of the things you take for granted,” said Jain. “That’s how I want people who enjoy my art to feel.”

The future is clear for Jain: He’ll continue sharing his Sneaky Art with the world.

SONG: “So Beautiful” by Robert Glasper 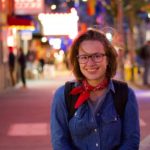 Clara Neupert grew up in Beloit. She attends UW-Eau Claire, where she is also an intern at Wisconsin Public Radio. She has a sinking suspicion that she’s developing lactose intolerance — an unfortunate condition in the dairy state.