I have previously confessed this crime. Specifically to note, I was born to Methodists.  Methodists by moral instinct rarely do anything with zeal, which is to say decoratively.  Drive a country road and the Catholic church can be immediately identified from that of the Methodist kind.  The one is elaborate, a splendorous outpour of stained glass, steeples, arches, marble saints, and gilded virgins – even the bell tower has stained glass.  The other will resemble something on the theme of a nice barn.  No statues, no gild, nothing in marble. Such is the Methodist God.

When it comes to hymn singing, to my opinion the very best kind is Welsh, the most unashamed kind previous to Janis Joplin, Willie Nelson, not to forget Van Halen.  The Welsh similarly do not care how awful the sound is as long as it is long, loud and heart-felt.

Grandfather Fletcher rarely went to church, but ironically it was he who taught me how to sing to cows.  For too many white and freckled males, excepting the Welsh, singing is a task for females to do.

Quite to the contrary my grandfather believed.  In nature, he said, is it not the owl that sings out from drear February woods, a scene otherwise so mournful as to forbid singing.  Is it not the prairie chicken who drums passionately as Ringo Starr.  And as for the sandhill, he sings loud enough to awake the entire landscape from its winter.  All of this accomplished by song.  My grandfather believed song was the one vital mechanic of the world.

It was a known dairy barn axiom that cows are the better temperament for the singing.  Milking a female animal, again to reference my grandfather, was an inherently sensual act.  More pointedly with the likelihood of being a romance.  There never was a right-thinking cow who would milk easily and with earnest devotion if her attendant did not sing to her as he conducted the chore.  Worse yet if his hands are cold.

It was my fate as a farmboy on the occasion to milk cows with my grandfather to learn to sing to his cows.

Sing loud, sing long, sing enthusiastic just like Janis Joplin who didn’t give a rat’s ass either.  It is amazing the number of farm chores that are either gross, creepy, lonely or really boring.  99% of farm chores qualify under one of these general categories with even odds of all four at once.  I was not the first farmkid to hope to die young.  The one intercession was singing to cows, also singing to the feed grinder, the silo filler, the hay baler.

Later as an English major, I read One Day in the life of Ivan Denisovich by a Mister Alexander Solzhenitsyn.  Worst prison camp ever it was, Siberia, meaning some worse yet.  Worse food, worse everything and the one chance to survive intact was to build something, what the hell anyway.  As it happens my grandfather made the same estimate, so you might as well sing.

Besides singing put females at ease.  In nature, grandfather said, spring doesn’t happen because the sun rises high in the sky, it happens because the earth is sung to.

Most astronomers don’t think this is true, instead that birds sing because the sun rises, not the other way around.  For my grandfather, the cause was the song. 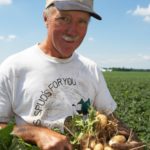 Justin Isherwood is a fifth-generation farmer and an award-winning writer. His most recent books are Pulse: A Farmer’s Take on the Universe and Walking on Water II.