With Halloween this week, we thought it’d be the perfect time to revisit one of our favorite ghost stories on Wisconsin Life.

“The Rusted Bell” was written by Darlene Rickert of Green Bay, Wisconsin. She takes us inside your average café — one that just opened its front door to some unexpected visitors.

Rickert’s story was one of the winners of Wisconsin Life’s Flash Fiction: Ghost Story contest in 2012.

The rusted bell clanked when he opened the door. Leaves blew in behind him and swirled around the pleated cuff of his trousers and his polished wing tips. He was average height but stood straight and looked tall, this young man in a grey flannel suit.

He looked around the room at the tables filled with patrons and waitresses carrying heavy burdens on large metallic trays. It was lunchtime and this small town café was busy with the hum of conversation and the clatter of plates.

He removed his cap and sat down on his regular stool at the lunch counter. He reached forward and tapped on the white ceramic coffee cup in front of him. The man on his left looked toward the cup, then returned to reading his newspaper. The waitress behind the counter with the shamrock tattoo on her wrist, glanced in his direction, but her attention was devoted to the man with whom she was flirting.

The rusted bell clanked.  A lithe young woman in ties entered. A leaf caught on the slightly crooked seam of her silk stocking but, when she stopped, her skirt bounced forward, knocking it free. The short strap of a blue satin bag hung from the crook of her slender arm and she tugged at each fingertip of her white glove until she pulled if free from her hand.

It was the click of her heels on the worn floorboards that caught his attention. He watched her gently remove her glove and reach up to arrange the strands of hair that had come loose in the wind.  He smiled, as though this was the first time he had ever seen her. He twisted on the stool to rise and as he did, the button on the top of his cap made a muffled scraping sound on the counter. The man on his left glanced in his direction and the waitress momentarily lost track of what she was saying.

The man in the grey flannel suit, hat in hand, walked up to the woman at the door. She gave him a familiar smile and he gave her a playful grin.  Donning his cap, he offered her his arm. She stepped toward him and without any thought of the weather tucked her ungloved hand in the crook of his elbow. The rusted bell on the café door was silent and motionless as they walked through the door and vanished.

A man on a stool near the door shivered and wondered why. Then he asked the waitress if she’d seen old Pete.

“No, but he’s so quiet that sometimes he slips in and I don’t even notice,” replied the waitress.

“I’m not surprised,” said the man two stools down. “He’s been heartsick since Eliza died. Been missin’ her a long time now.”

“They met right here, in the café over 50 years ago,” added the waitress. “It’s kinda romantic.”

Silence filled the room. No one moved. And in the sudden stillness, some thought they heard a sound, like the clank of the rusted bell that hung on the café door.

“The Rusted Bell” was written by Darlene Rickert. The radio piece was produced by Erika Janik and Anne Strainchamps. It was performed by Liz Stattelman-Scanlan, Stephen Montagna, Russell Wolff, and Michele Good from the 9XM Players. Sound treatment by audio engineer Joe Hardtke.

SONG: “The Haunted House” by Phish 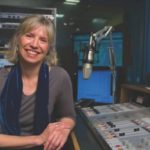 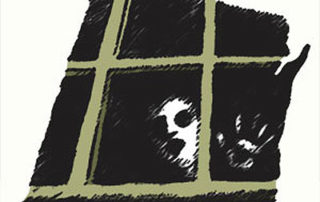