Milwaukee hosted its first ever week-long celebration of hip-hop last week. Organizers of Hip-Hop Week MKE showcased local artists and legends of the genre, like DJ Kool Herc, also made appearances. But sprinkled between shows were events promoting financial literacy, health, and civic engagement in the community.

The fact that hip-hop turned 45 years old in August helped initiate the festivities.

As if that were not enough reason to celebrate, said Milwaukee Alderman Khalif Rainey, the genre is also coming off a strong year.

For the first time in history, hip-hop was the most popular music genre last year, beating rock, according to Nielsen’s 2017 year-end report.

He said while there’s no denying the genre’s cultural contributions, he also wanted to use the music to start some serious conversations.

“To take the platform and have some important conversations in a voice that the community is familiar with and that voice being hip-hop,” Rainey said. “Hip-hop is healthy, hip-hop is having your money together, hip-hop is being a productive neighbor and citizen in your community.”

To start those conversations, Rainey arranged a networking event for artists, a health fair, a job fair, a documentary screening promoting civic engagement, and a financial literacy event. Jay Morrison talking to a crowd of about 100 people about financial literacy. (Ximena Conde/WPR)

Tyeshia Coopwood, an entrepreneur, said there are not enough events in the community that discuss issues like financial health. She said she was able to come out of the event with notes and advice on fives areas to focus on.

“I feel like I can dabble in each of those five areas,” Coopwood said. “So I’m just excited you know to get my credit together, save money– so, that’s exciting.”

Another event on Milwaukee’s south side, leaned in on hip-hop’s socio-political influence.

Sebas and Chris P make up Browns Crew. DJ Loop teaches women how to DJ. Together, they hosted an event that discussed hip-hop’s role in social movements.

In one of Sebas’ verses, he raps about police brutality and distrust communities of color have in police.

“Got my hoodie on while I’m playin’ Biggie,

Keep thee from knowing what I’m stayin’ on…

If I die tomorrow, don’t believe a word they say

Turn me to a hashtag, just another brown boy…”

Sebas argues that hip-hop is more than a genre.

“It’s a consciousness, it’s how you move, how you act,” he said. For Pierre McBride, owner of promotion company Pistol Pete’s Productions, the week was a way to keep youth abreast of the music scene in Milwaukee, especially during a month that has been especially violent for the city.

“There’s a lot of unnecessary killing and unnecessary gun carrying and totin’ and stuff like that and we just want the whole world to know there’s more out there than that,” he said.

But at the end of the day, some attendees said it was nice for hip-hop to be celebrated.

“Hip-hop is what we do, hip-hop is what we love, we live hip-hop, we breathe hip-hop and we’re just really excited about the fact that Milwaukee is now recognizing the culture,” said Tina Kern, a manager for the Wavie Gang.

Taj Raiden is another Milwaukee rapper. She said she only learned about Hip-Hop Week MKE when someone sent her a message on Instagram asking her to perform.

“Honestly what I hope (attendees) get out of it is an awareness,” she said. “That this is happening and it’s a beautiful thing.” 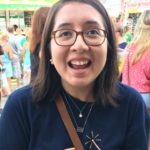 Ximena Conde is the 2nd Century News Fellow at the Milwaukee Office of Wisconsin Public Radio. She loves to jog around Milwaukee even if it’s two miles at a time. Ximena also enjoyed the cheese curd taco at the Wisconsin State Fair.