Arijit Sen is an architecture professor at the University of Wisconsin-Milwaukee. He’s lived all over the world, from Mumbai, India to Muncie, Indiana. Since 2012, he’s been directing the field school in UW-Milwaukee’s Buildings, Landscape and Cultures program, where he’s creating a new model for how universities can work closely with community partners, especially those in historically underserved neighborhoods.

Sen and his community partner Cheri Fuqua spoke with Jimmy Gutierrez about their work in a recent episode of  Human Powered, a podcast from our partners at Wisconsin Humanities.

Almost every architecture department has a field school — it’s where students travel around Europe or study famous buildings, but in Sen’s version, students stay in Milwaukee and build something else: community.

“The connection to community is a personal search,” Sen said. “I went away from where I grew up, and I didn’t have a place which I called home. I had people who I called home.”

“What I realized over time is people, places, activities, memories is place, not just the physicality of it,” he continued.

For the last six years or so, Sen has been a regular presence in Washington Park, as well as Sherman Park, Thurston Woods and other north side neighborhoods. Through the Field School, he’s built up a network of residents and students actively working together. 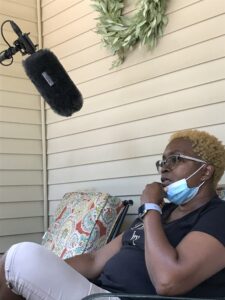 Cheri Fuqua has owned her home on the border of the Metcalfe Park and the Sherman Park neighborhoods for almost two decades now.

Across the street from Fuqua’s house are four vacant lots in a row, a pretty big piece of land. After years of work, Fuqua, with help from the city, transformed it into a park. She wants the park to connect Metcalfe and Sherman Park — so she ended up calling it Unity Orchard.

“I can come out here and I can start putting flowers out, water my grass and cut my grass, and then it’s a … ripple effect,” Fuqua said.

“It’s just ideal because you’ll see people just come over and just talk, or have lunch or the kids are over there playing,” she continued. “Other than that, it would just be vacant, with paper and bottles … But then it’s a space like this that you’ll actually respect the place, if they see we’re building on it.”

Sen’s students have done two projects with Fuqua to help develop Unity Orchard even more. First, they made a bunch of planters that doubled as benches.

They also built a shed. Or maybe trellis or pergola are better words for it. The idea was that it could collect rainwater for the plants and trees and provide a little shelter.

But then the project ran into reality.

“This time we fundraised,” Sen said. “We had $1,000, we bought materials for that, they did an incredible amount of work. And then someone got killed in the neighborhood.”

“Out of respect, we didn’t really work on that,” he continued. “So we were hoping that it will be taken over by another person, but then the pandemic started. So it sat there in the extension, all these pieces of wood and I was like, ‘Okay, it’s gone, $1,000 down the drain. Nothing’s gonna happen.'”

But then two months ago, three of the students came back, Sen said.

“They just called me up and said, ‘Can you give me Cheri’s number?’ And that’s all they said,” he said.

Fuqua said they then called her out of the blue.

“Like, ‘Miss Cheri, how are y’all doing over there? Do you think we could come and put the rain catcher up?'” she said. “And I’m like, ‘Really?'”

They told Fuqua they had some time and would love to come and set it up for her.

“I almost cried, real talk,” Fuqua said. “I really could see, it wasn’t just his class and his credits that he was looking for. This is beyond. They came over here and actually forged relationships … they know the guys and actually the guys came out and they helped them put it up.”

“This is the realness that you look for, and a genuine connection — you will know it. You will know,” she continued.

How we value places in our communities is all about perspective. Sen and the Field School tapped into that, and ended up building something tangible.

That story came to us from Human Powered, a new podcast from Love Wisconsin and Wisconsin Humanities. It’s a monthly series that is out now and a place where you can hear more about the work of Arijit Sen. This story was narrated by “Human Powered” host Jimmy Gutierrez and produced by Craig Eley.