Flooding along Highway 56 in Viola, Wisconsin. (Photo by Tim Hundt)

In recent years, Wisconsin’s Driftless Region has experienced some of the most severe flooding in its history. The new podcast from our partners at Wisconsin Humanities called “Human Powered” is exploring that issue in one of its episodes.

One night in late August 2018, it started to rain in southwestern Wisconsin. That rain quickly turned into a downpour and then a flash flood.

Ryan McGuire is a firefighter in Coon Valley. His pager starts going off at 11 PM. By 1 AM, he’s making his first rescue.

“So she goes to open up her door,” remembered McGuire. “Now by this time, the water’s about midway in between my knees and my hip. And I’m six foot. And we always tell ‘em, ‘Grab your phone, grab anybody that’s in there and grab any medications because we don’t know if we’re coming back.'”

These floods have devastated low-lying communities like Coon Valley and others in the Driftless Region. And they seem to keep coming. In the last 15 years, there have been at least five so-called “100 year floods.” It has people asking — how can we continue to live here?

A project called “Stories from the Flood” could be one of the answers. Started two years ago by the Driftless Writing Center, volunteers and community members have interviewed over 100 people about their experiences during flood events.

These stories share grief, resilience, and even joy. But they also give us the ability to think about complex issues like flooding and climate change in a brand new way.

“I think folks who haven’t experienced floods, think about them maybe as a one day event, or two day or one week. And really, two-and-a-half years later, people are still cleaning things out, rebuilding things, tearing things down,” said Caroline Gottschalk Drushke, an associate professor of rhetoric and composition at the University of Wisconsin-Madison. “I think floods appear in the news and then disappear. And really, the impact of flooding is felt for years. It is clear that people are super traumatized. And what if we tried to help people express that and share it and understand that they’re not alone in it?”

People wanted to talk. People needed to talk. So Gottschalk Drushke and other volunteers started recording stories. And she got her students involved. They heard stories of resilience, stories of hope and also pain. 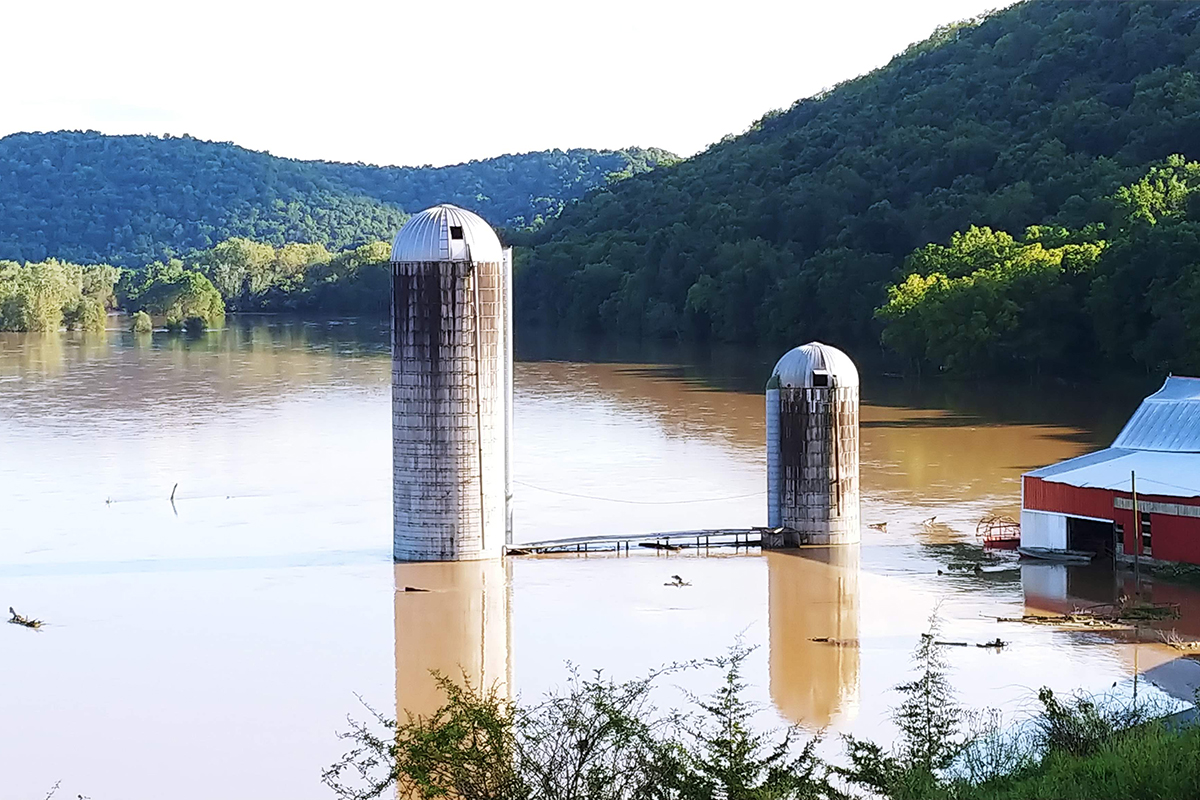 Farmland under water during a flood in Wisconsin’s Driftless Region. (Photo by Tim Hundt)

For Ryan McGuire, the night of flood is a memory he’ll never forget.

“I don’t wanna say you have PTSD, but you get flashbacks,” McGuire said. “I go right back to that night. I can picture the — I’m there. I mean, I’m walking down the street and the water’s up to my chest. And you feel like a shiver in your back. It doesn’t scare me. But it’s just…I’m there.”

Cele Wolf is still haunted by the memory of the 2008 flood, when she headed out on her morning drive.

“I drove my usual road through Boaz,” Wolf said. “I didn’t make it to Boaz because I got to a certain place on Highway 171 and everything stopped. There wasn’t anything more. There was water everywhere. That image still comes up in my dreams.”

“Many of those storytellers did give feedback saying that it was a really important experience for them,” Gottschalk Drushke said. “It was important to be able to tell and to think through and to narrate what had happened to them. And then putting that experience in some context and putting it in connection with other people who also experienced something really, really hard right alongside of them.”

It also helped her students as they themselves struggled through a school year like no other.

“A lot of my students in the spring and fall (of 2020) said that listening to the flood stories helped them make it through COVID-19,” Gottschalk Drushke added. “There was something powerful in the ways that people face something really overwhelming and awful and kind of find their way through it. That gave my students a lot of peace when they were going through a similar kind of situation.”

“That’s something that science doesn’t necessarily do,” she said. “Science helps point us towards an answer. But I think stories can give us equipment for living, if you will.”

That story came to us from “Human Powered,” a new podcast from Love Wisconsin and Wisconsin Humanities. It’s a monthly series that it is out now and a place you can hear more about the work of Caroline Gottschalk Drushke and “Stories from the Flood.” This story was narrated by “Human Powered” host Jimmy Gutierrez and produced by Craig Eley.