‘I Am Terrified For His Life’: A Mother’s Love And Worry For Her Black Son

There are parents in Wisconsin who fear for the future of their Black sons. That’s no different for storyteller Takeyla Benton of Madison, who wishes others would see her son as they see their own children. She shared the following at a live “Listen To Your Mother” storytelling event in 2014 and on the podcast, “Inside Stories,” where she talked about why she had to tell this story.

(This audio contains a word that may be offensive to some listeners.)

Last night, I held my son while he slept. I couldn’t bear to put him into his own bed. I squeezed him tightly and tried not to cry too loudly as I kissed his caramel-colored forehead.

My silly, adorable little guy. Like all little boys his age, he’s obsessed with Minecraft and superheroes. His default speed is somehow turbo — all the time. Any sound produced by a bodily function induces uncontrollable laughter. He sings when he’s in a good mood and once told me that fried cheese curds are so delicious they should be Madison’s official food. He’s got a knack for annoying his older sister. And if I let him every day — into bed — he would wear a suit and full tie.

And I am terrified for his life.

Not the normal maternal worry about chipped teeth, scraped knees and sports-related injuries. No, I harbor deep-seated anxiety and gut-wrenching fear for the statistically inevitable outcome of his future: imprisonment or death.

I tell myself, “He’ll be different. I’ll raise him better.” I’ll learn from other mother’s mistakes and give him every opportunity for success. But, I know nothing that I do, nothing I teach him, no opportunity awarded or future I map out for him — not a damn thing can guarantee that he will live a long life free of handcuffs or a coffin.

In a society where he doesn’t have any value — unless he’s holding a ball or a mic — this sweet, little boy — who loves karate — I try to teach him to:

Work hard now so you can play harder later.
Make decisions that you can be proud of.
Speak up now; don’t mumble.
Say yes, ma’am and no ma’am to everyone.
Hold the door for women and elderly folks.
Tell the truth and keep your promises.

My promise is to keep you safe and try my best to protect you from the hate.

Don’t be late.
Keep your hands out of your pocket.
Smile.
Be polite.
But don’t let people push you around.
Always stay in control of your emotions.

Say please and thank you.
Don’t drag your pants or hang out with folks that make bad decisions.
Don’t play around in public and call your friends a n-word unless you just want to be viewed like another n-word.
Just because that song is popular and everybody everybody’s singing it, I do not want to hear you sing it.
Speak proper English.
Who cares if they say you talk white? That enunciation and use of verbs may one day save your life.

What good will any of this do? If he’s deemed a thug or threat, punished more severely for the same mistakes, can I really protect him — my dimple, little cheek guy — from all the hate?

How do I teach him to value his life in a society where his life seems so valueless? How do I teach him individuality and to be accountable for his actions when his mere presence evokes the stereotypical mass panic and paranoia that pushes the plague of imprisonment and poaching of Black men into extinction? Perhaps the ASPCA should protect our Black men instead of the NAACP?

I tried to explain the pain to a seven year-old. The movement behind Black Lives Matter. Teach him that he matters and so do so many others that we’ll never know. Because there in their veins flow the perseverance and power of those dauntless ancestors who endure the torture and turbulent times, sacrificing their lives and enduring pain so that it would not be mine or his. I teach them to honor the sacrifices that others make for future generations of Black kids that they’ll never know.

I want to teach my quirky little guy — who loves “Doctor Who” — individuality and pride. But his survival may very well depend on how well he is able to hide his manhood. See, the idea of a Black man that is nonthreatening — who isn’t viewed as a thug or n-word — is a lie.

I want to protect my funny, sweet, adorable little guy. But the powerlessness dwindles my hopes for humanity. For his tiny shoulders, all of this may be too heavy.

I just want everyone to always see him the way I do and take care of him like he is their son, too. To see him with all the pride and promise, not the stereotypes and lies. I want to hold him and protect him from the world because the thought of holding his dead body and having to bury him in a suit and tie he loves so much, causes my soul to splinter and bleed through my pores.

I will just sit here with him and hold my little guy for all the Black mothers who too soon had to say goodbye. Takeyla Benton’s story came to us from the podcast “Inside Stories,” which features Madison storytellers and digs deeper into their lives. She’s the co-host of the podcast and originally shared the story in 2014, at a “Listen To Your Mother” event. Learn more about why Takeyla Benton wanted to tell this story on the podcast and how she crafted it story to impact a white audience.

MUSIC: “Fair” and “It Won’t Stop” by Violents and Monica Martin 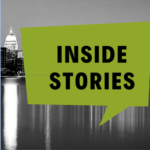