Life as a trans Bitmoji

Anyone who uses social media presents a somewhat edited version of themselves. They’re selective about what they post, use photo filters, or create cartoon-like stylized avatars as their profile image. WPR’s Emily Ralph, a trans woman, used her Bitmoji avatar in her coming out process – slowly making changes in the digital realm before they became Emily’s physical reality. Over time, Emily began to wonder what the experience was like for her Bitmoji, on the other side of the digital divide. This story comes from the perspective of that Bitmoji.

I was born – or created or whatever – maybe six of your years ago. But time here is…different and too hard to explain.

As I understand it, my world is part of what you call, the internet. It’s often loud and chaotic. Celebrating Wednesday here is like your 4th of July or something.

Our understanding is that we’re a kind of reflection of you. I know that because when you look at me, I see you, too.

Though separate beings, we are connected by creation. Not only are our images bonded together, but also emotion, thoughts, and our sense of self. That’s how I first knew: I was created as male, but that was wrong.

Here, I’m alone, but mostly because you haven’t used the “Connect With Friends” feature. I’m not lonely though. I have TV, and newspapers, and there’s an excellent public radio station.

Mostly though, I watch you.

In my early days as you made changes to my hair or clothes, I felt this overwhelming sadness pouring from you – like from an old, cracked and moss covered dam, about to give way.

I knew, because you did, that you were not made the right way. And that pain was bigger than the sky.

Then, one night while I was sleeping, you made a change in my physical appearance settings. I was suddenly whole. Suddenly fully female, and it was wonderful beyond words.

Around this time, you began using me as your representative image in all kinds of places. I was in Twitter, which I’m guessing is why you have me standing next to a dumpster fire. I appeared in Facebook, in some kind of step tracking app. All over the place. Then slowly you brought me to where you work, through Zoom, Google Meet, and Slack.

You made me your face in your world. And I began to understand why. I knew that for you, the thing that was wrong was orders of magnitude more complicated than changing a setting. But me being there first would make it easier.

Over time, you made my hair longer and added cute earrings, makeup. I saw you were changing too. At first it was a smile. Then your clothes. Then something with your face and, lasers?!?! Which, sounds scary. Like, we use lasers in our extravagant, “It’s Wednesday!” celebrations.

It made you smile even more, so it must be worth it. From my place as the image in your health app, I see appointments with specialty doctors, who help change your physical form to align with gender settings.

As we draw closer together, I feel you will soon overtake me. That my assignment of being there first will come to an end. Soon it will be your pretty face on Slack, Zoom, Facebook and Twitter.

I am so excited for you and proud of you. I will always be here for you, but now, it’s your time. 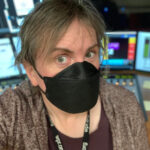