Music stages across Wisconsin (and around the world) have been silent since March as the COVID-19 pandemic forced venues to close. This has moved artists to Facebook and other virtual stages. Now, some venues are starting to bring back live music — with smaller audiences permitted and precautions in place.

This includes The Jazz Estate in Milwaukee, which reopened on June 19, 2020 for the first time since March.

Some things felt the same — the lights were low, the bartender poured drinks and early in the night, the band warmed up.

But other details were different. There were fewer patrons and they were all wearing masks — the new required attire at The Jazz Estate and elsewhere in Milwaukee. There was also a barrier placed at the front door. Attendance is by reservation only tonight. The Jazz Estate owner John Dye at the bar. (Photo by Andy Turner)

Owner John Dye has been waiting for this night.

“A lot of people get their start with live music. A lot of musicians meet with live music,” Dye said. “It really represents more than just a live show. It’s a whole system.”

Bars and restaurants are slowly reopening in Milwaukee. In mid-June, The Jazz Estate was operating at 25% capacity for the show, which meant only 16 people could be in the venue, including staff and band members. Tickets were $44.

“Really for tonight’s show, we’re only selling seven tickets,” Dye said. “But we figure bringing the music to the people is worth it. So it’s something we have to adjust to and hope [capacity] goes to 50% soon.”

Dye said he’s spent the last few weeks figuring how to comply with all the requirements to make his venue as safe as possible.

The new “Covid Rules” are displayed around The Jazz Estate. The Jazz Estate’s “Covid Rules” on display at tables throughout the bar. (Photo by Andy Turner)

“We’re moving tables, developing some policies around masks and sanitation and things like that,” Dye said. “We also had to get our reservation software up and running, which is something we didn’t use previous to this.”

Milwaukee’s Marcya Daneille Group kicked off opening night — the group included Marcya Daneille on vocals, Olen Franklin on drums, Alan Harris on bass, Isaiah Jones Jr. on piano, and Darrien Williams on guitar. The musicians were scheduled to play The Jazz Estate before the pandemic. The Milwaukee Jazz Institute sponsored and helped pay for the band’s June show. The show was also streamed live on Facebook.

Marcya Daneille said it felt great to be back in front of a live audience and with band members she had not seen in months.

Barbara Wanzo, executive director of Black Arts MKE, attended the show. She said she didn’t plan going out soon after stay-at-home orders were lifted, but she wanted to support a friend who was performing. Wanzo said paying higher ticket prices because of social distancing does not bother her.

“I think it could keep some people away. It would not keep me away personally,” Wanzo said. “I’m a big supporter of local talent, especially local African American talent. I’d do about anything to support them, as long as I can be safe.” Bartender Jeff Kinder admitted it felt a little strange to be back behind the bar.

“Just the vibe I’ve gotten from other bartenders on the block — everyone misses it,” Kinder said. “It’s just a weird thing entering this type of work right now.”

Despite that sense of weirdness, Kinder said he was happy to see some familiar faces and realized how much he had missed certain aspects of his job, like the sound of making a good cocktail.

“When you shake a drink really good and you crack a tin open — when you hear that vacuum broken and you hear these bubbles coming out of the tin — it’s hands down one of my favorite sounds in the world. You know you did it right,” Kinder said smiling.

The economic fallout from the pandemic has hit Dye especially hard as the owner of two other Milwaukee establishments: Bryant’s Cocktail Lounge and At Random. He called it a huge jolt that has left him unsure how his businesses will recover.

“You know, in all my years of business, I’ve planned for one business closing as sort of a worst-case scenario. What if there is a fire or something else and you have to close?” Dye said. “I never planned for all three having to close on the same day.”

Dye said The Jazz Estate will continue having shows until it does not make sense to anymore.

“But there’s a little bit of it that’s just bringing a service, bringing the music back,” Dye said. “I mean, this isn’t about any kind of profit or anything — though that is important and not having that income is scary — but it’s also important to have music and life and energy.”

Dye said he knows how important venues, like The Jazz Estate, are for musicians. While restaurants, bars and stores continue to reopen, many performance venues are likely to be among the last to reopen.

“That’s where a lot of our musicians make all of their money” Dye said. “It’s a scary thought, what’s going to happen to the music world — especially local music, avant-garde music — after this? There’s just a lack of places to play.” 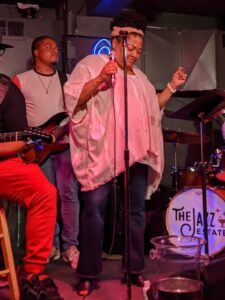 Singer Marcya Daneille on stage at The Jazz Estate. (Photo by Andy Turner) 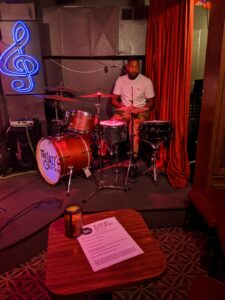 As for Daneille, she teaches at several local music institutions and performs with jazz and soul bands. She’s also trained in classical music. Daneille said she hopes her versatility will benefit her as the pandemic continues to impact the music world.

Flexibility and creativity will also be key for The Jazz Estate. The bar plans to continue to sell to-go cocktail kits throughout the pandemic and host more private events.