Madison Pride Hearkens Back To Its Garden-Party Roots

From drag queens to food trucks to high heel races, Madison is introducing a new Pride celebration this year in the form of the OutReach MAGIC Festival on Sunday, Aug. 18.

Sami Schalk — who says she identifies as a fat, black, queer, cisgender, non-disabled woman — is the festival’s organizer. For her, making the switch from parade to party was a natural evolution. “The parade, lots of folks would come and you would walk down State Street and you get that beautiful view of all the rainbow flags walking toward the state Capitol — it’s a beautiful image. But after that people would disperse,” said Schalk, who is also an assistant professor of Gender and Women’s Studies at the University of Wisconsin-Madison. “I came to Pride within a month of moving and was hoping like, ‘Okay, here’s where I’m gonna meet some queer people,’ and I didn’t get to do that … And so, we’re really hoping that a festival will be a chance for folks to actually meet one another, spend time together.”

The switch is also a way to heal rifts from last year’s controversy about police presence in the parade.

According to a July 2019 article in Our Lives Magazine, prior to the 2018 Pride Parade, members of Madison’s LGBTQ+ community — especially the trans community and people of color — expressed concerns about armed officers’ involvement in policing the parade.

“For me, it’s to move away from the reliance on cops. By having a festival, we get to have a space that we are not required to have police presence in any way whatsoever,” Schalk said. “I do not personally want to see the queer community embrace systems that are harming people within our own community just because it does not personally impact you.”

So this year, OutReach — a Madison nonprofit that supports and advocates for the LGBTQ+ community — hopes to mend those relationships and offer a space that’s inclusive and safe for everyone.

“I really hope that it’s a place that people get excited about, that they like plan their outfits in advance, like they’re ready to come and show up and show out at this event,” Schalk said.

She also hopes to create a space that provides queer youth a chance to interact with and meet adults in the LGBTQ+ community.

“I hope that it becomes a place that is very friendly for queer youth, to see each other, to see adult queer role models,” she said. “It really means that we get to see the diversity of folks who identify as queer, as LGBTQ+ in any capacity or QUILTBANG is the most recent one that I saw, so: queer, undecided, intersex, lesbian, trans, bisexual, asexual/aromatic, nonbinary, gay. QUILTBANG, you’re welcome.”

Schalk says festival-goers can expect live music from local queer performers, drag kings and queens, a family area complete with inflatables and a dunk tank, as well as fields of food carts and nonprofits sharing resources and information.

While people across the nation celebrate Pride in June to commemorate Stonewall, Madison has been celebrating Pride in August since the 1980s. According to Richard Kilmer — an organizer of Madison’s first pride March — it’s mostly for logistical reasons.

“At that time Chicago had a big pride rally and busloads of people from Madison would go to Chicago for Pride so they didn’t want to do it the same weekend as Chicago Pride,” Kilmer said. “We (also) wanted to do it while the students were still here because at that time students left in the summer.”

This year’s MAGIC Festival also has roots in a historical pride celebration called the MAGIC Picnic.

“I think using the MAGIC festival to kind of describe this to hearken back to one of the original pride celebrations here is because it is the 30 year anniversary, 50 year anniversary of Stonewall, so I think in part it is a way to honor and recognize that history to bring those histories together,” Schalk said.

Kilmer — a member of the Dane County Board of Supervisors and pharmacist at Madison’s Community Pharmacy — has been part of the Madison Pride scene since 1989 when the first march occurred in the Capitol city.

As Pride marches gained momentum across the nation, Kilmer was shocked Madison didn’t have its own event to celebrate and advocate for LGBTQ+ equality. With the help of two of his friends, Kilmer organized Madison’s first march in 1989. Richard Kilmer, top left, poses for a photo with the planning committee of Madison’s first Pride March in 1989. (Photo courtesy of Richard Kilmer)

For many in the community, Madison’s first march was a pivotal moment for their journey as a member of the LGBTQ+ community.

“It was very empowering for people. Lots of people watching from the sidelines who were afraid to march came up to me years later and said, ‘That was my defining moment when I saw all those people,’ ‘I was afraid to march but it caused me to come out.'” Kilmer said.

While today’s events have morphed into more of a celebration of the queer community, Kilmer said the Pride of 30 years ago began as a march for civil rights.

“We were looking for something, we were looking for acceptance and freedom and civil rights,” he said, adding “I think it’s become important again to be active and to be vocal … for people to know that we’re there.” Whether it’s a celebration or a fight for equality, Schalk makes it clear that Pride exists to make space for those to love and live freely.

“The point of it is to celebrate us. To fight for our right to exist as we are; to love the people that we love; to be who we are in this world proudly,” Schalk said. “We’re in a different moment than we were 30 years ago … and we have to figure out how to be part of this community in this particular moment.” 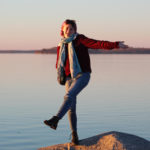 Alex Peek is a film student at Columbia College Chicago and 2019 graduate of Madison East High School. When not involved in her studies, you can find her either exploring downtown Chicago, working on crew for the next theater event she could get her hands on or hanging out with...