On the main drag of downtown Wisconsin Dells lies a mysterious world called Wizard Quest. Here, visitors are immersed in a fantasy world and embark on an adventure to complete a number of quests. They answer questions about the environment, decipher riddles and investigate hidden passageways.

WPR’s Trina La Susa visited Wizard Quest to learn more about the family behind this unique tourist attraction that she’s enjoyed since childhood.

When I was a kid, my family took a trip to the Wisconsin Dells. As we walked through the doors of Wizard Quest, we entered an alternate reality. Here, we met fantastical creatures who sent us on quests. We discovered secret passageways and had adventures in places beyond our wildest imaginations.

I returned almost two decades later to learn more about how Wizard Quest was created. 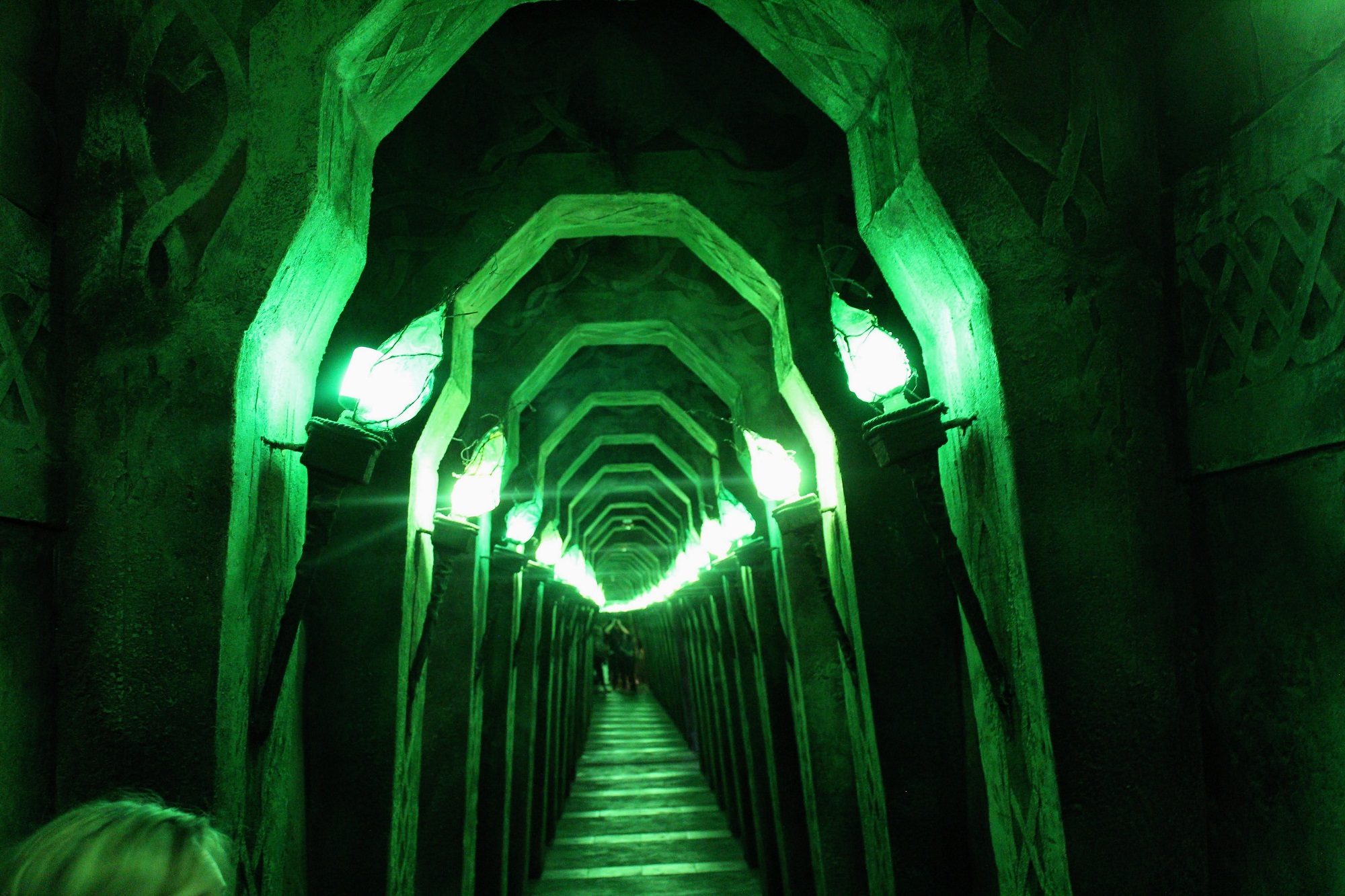 In the earth realm of Wizard Quest, there is a deep green corridor lined with Celtic arches and flickering green torches. While mirrors on both ends produce the illusion that the hallway is endless, Corena Ricks says the actual hallway is only around 30 feet long – but visitors aren’t aware of how long it really goes until they reach the mirror at the end. (Trina La Susa/WPR)

“This is the aviary. We’re in the air realm now,” said art director Corena Ricks, who guided me through one of the sets. “This is inspired by creatures of flight. We’ve added our own twist to birds. We’ve got some harpies up here.”

Corena Ricks said a harpy from magical lore is a creature that is part woman, part bird.

“You know how you hear people say ‘harping on me?’ That comes from the harpies,” she added.

Corena Ricks and her family are the real wizards behind this attraction.

They’ve created Wizard Quest’s Quadrasphere, a live fantasy setting that encompasses the fire, water, earth and air realms. Questers embark on an adventure to find creatures to interact with while using a portable tablet.

“When you first come into Wizard Quest, what we’re trying to accomplish is to shut the outside world out and completely immerse you into our world — a world of fantasy, a world of art, a world of dreams, and a world where anything is possible if you work together and if you believe in it,” said Kevin Ricks, head of interactive design and gamemaster at Wizard Quest. He’s also Corena’s husband. 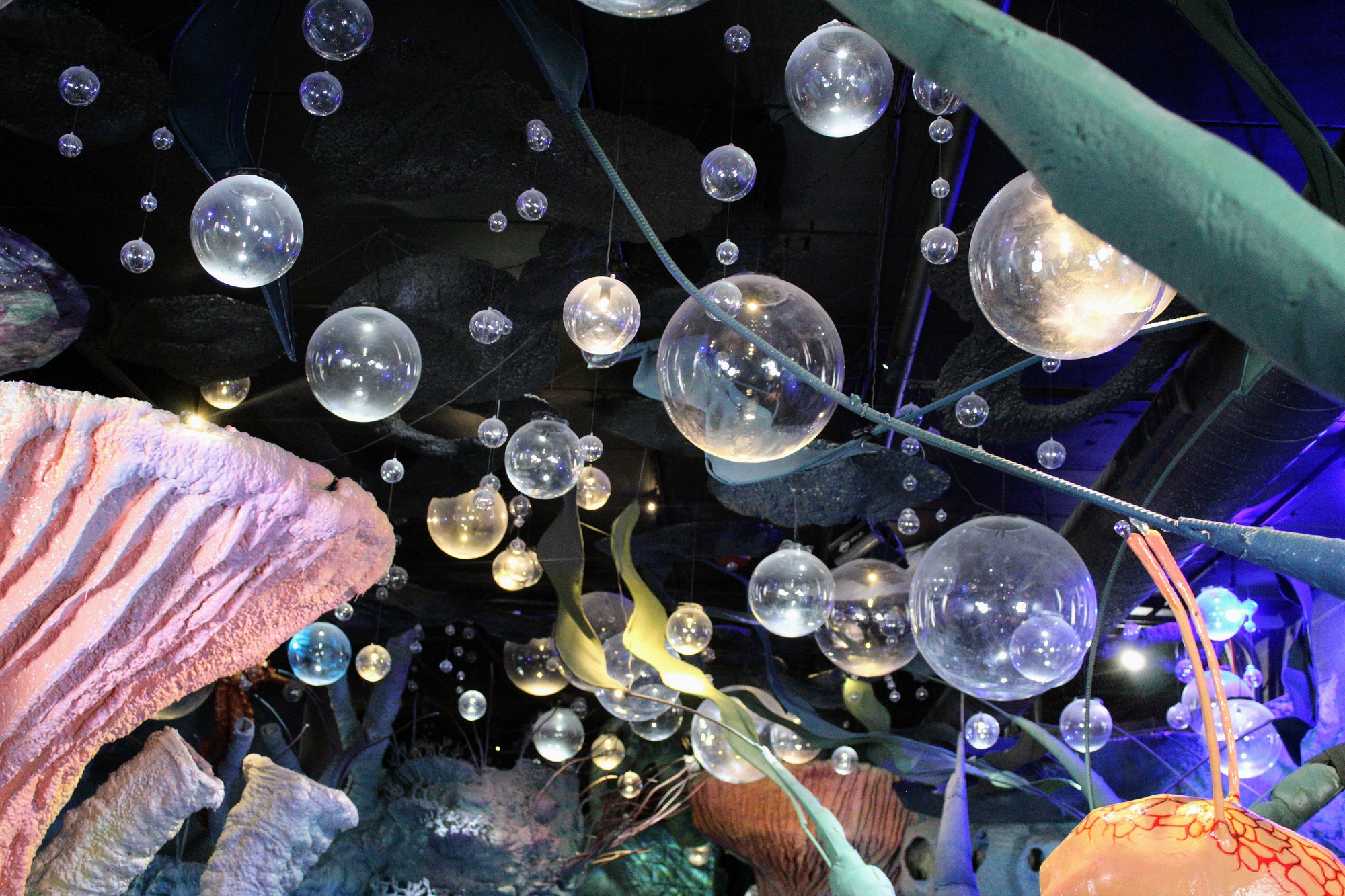 Wizard Quest is a family endeavor, with the majority of Kevin and Corena’s adult children involved in it, too. The Ricks family also owns a business and design company called Concept Attractions, which includes Ripley’s Believe It or Not in Wisconsin Dells.

“(My son) Braden drew it up, he welded the armature. I sprayed him and (my oldest daughter) Cassie and I carved him. Then, Cassie painted him,” said Corena Ricks. “So many layers to create just one aspect of our whole world.” 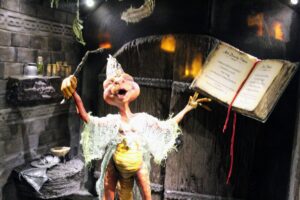 Hidden away in Wizard Quest’s secret apothecary is Whimsy, 13-inch-tall lizard donning a wizard hat, a gauze wizard cloak and a floating spell book. This was one of Corena Ricks’ first sculptures for Wizard Quest. (Trina La Susa/WPR) 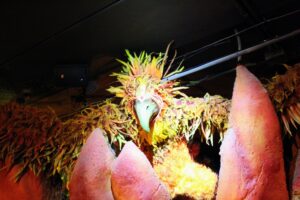 Wizard Quest’s fire realm was the brainchild of artistic welder and set designer Braden Ricks. A darker setting than the other realms, a phoenix with red, orange and gold feathers is just one of the realm’s features. (Trina La Susa/WPR)

“If you go in there, you’re going to see all these cool barnacles and different coral structures,” said Cassie Ricks. “And really, if you get underneath all of the magic of looking at that — it’s a lot of tin foil.”

Here, it’s not just the sets that are magical — these realms are populated by dozens of custom creatures, like fairies, goblins, mermaids and trolls.

Braden Ricks, an artistic welder, has a special fondness for, ‘Swindly,’ a 9-foot turtle with a starfish-shaped shell.

“He was my personal favorite to make because he’s my design,” said Braden Ricks. “I was able to just weld the framework. Then, my sister Cassie, after we foamed them, she did the carving and all of that.” 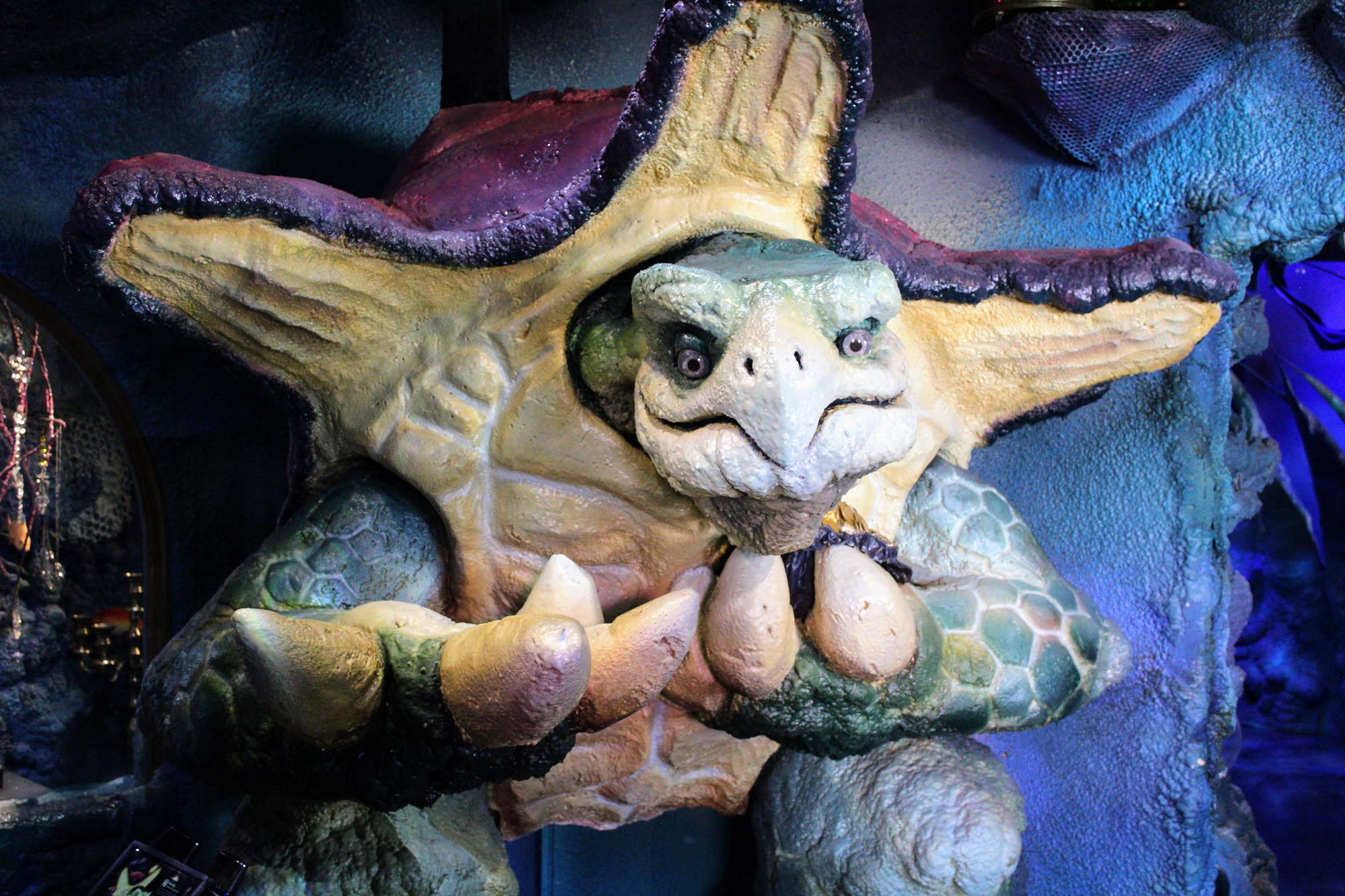 Swindly is a 9-foot-tall turtle with a starfish-shaped shell who resides in Wizard Quest’s water realm as the pawn shop merchant. He was constructed by siblings Cassie Ricks and Braden Ricks. (Trina La Susa/WPR)

Wizard Quest was created by the family in 2004. Since then, the Ricks family has been perpetually adding new creatures and technology.

“One thing you can be sure of is that when you come back, something’s going to be different,” said Corena Ricks. “There’ll be another layer that you didn’t notice. There may be secret passages you didn’t discover. The game will always be evolving.” 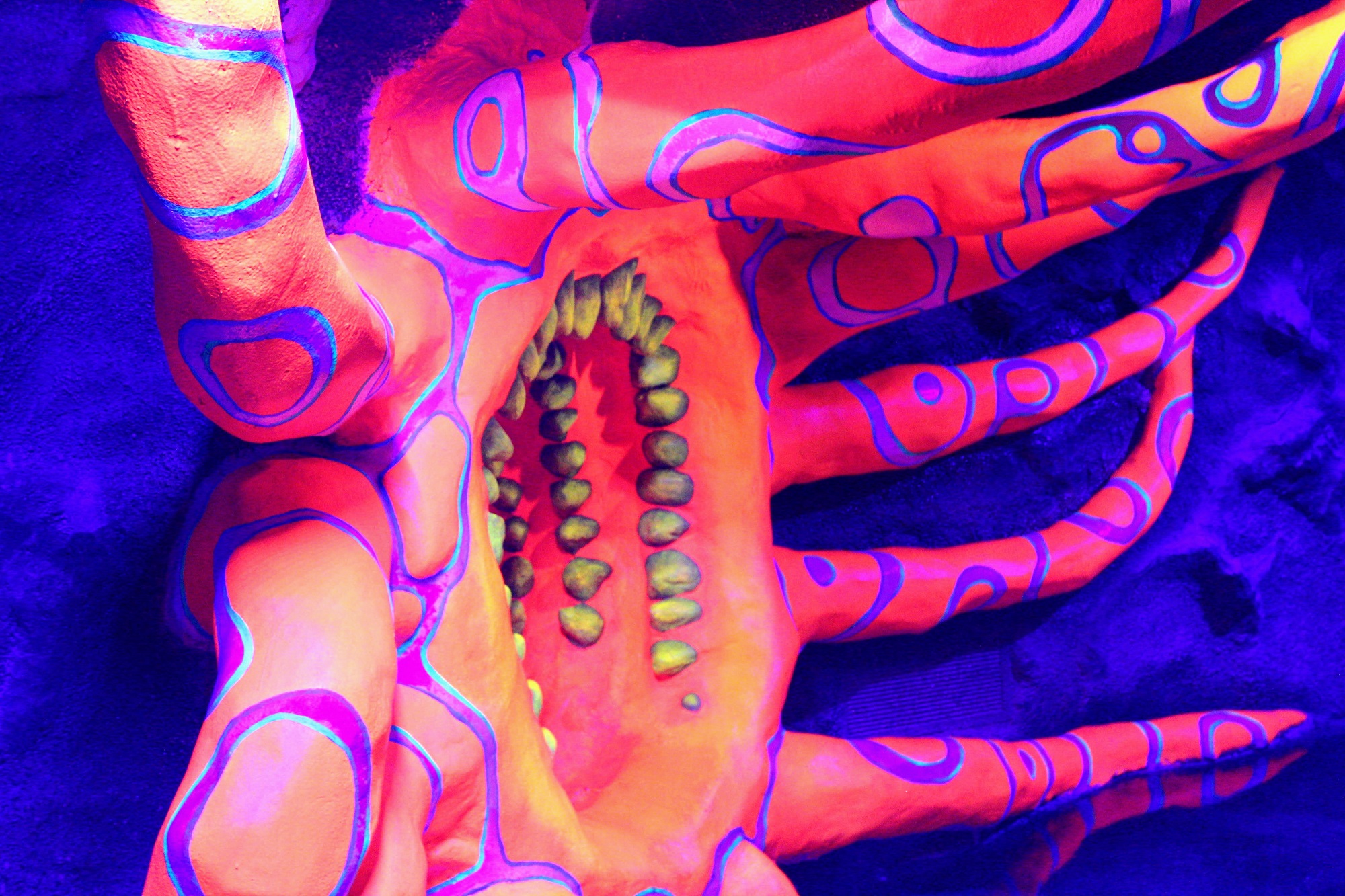 Corena Ricks says this kraken was created by first welding a rebar metal structure with tentacles going in different directions and curls; then fully coated in layers of mesh and spray foam that were smoothed and carved into the creature’s form; and finally, hard coated and finished for durability. She says the kraken was constructed in a similar way to many of the other structures and creatures at Wizard Quest. (Trina La Susa/WPR) 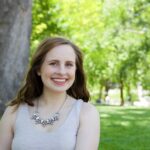 Trina La Susa is a broadcast engineer at Wisconsin Public Radio. She previously worked as an editor at a national dairy and cheese publication, reported on sustainability and environmental news in Wisconsin, and lent her hosting and production talents to WSUM 91.7FM for several years. She loves to cook, hike,...