In the midst of the coronavirus pandemic, we’re all being urged to stay “safer at home.” So, Wisconsin author Michael Perry is trying to “hunker down” the best he can right now, just like the rest of us. And recently, he’s been taking a little time most days to read from one of his books online.

WPR’s Brad Kolberg recently gave him a call just to check in.

Brad Kolberg: How are you holding up?

So we’ve been in a self-isolation, self-quarantine situation. And we’re pretty fortunate. We have food and some options. You know, there’s just so many people in such dire circumstances that we’re doing fine. We’re trying to abide by the rules and help the best we can, you know?

BK: So what compelled you to hit record on your phone in the first place and record your readings?

MP: I just said, “You know, right now folks probably just want a little connection.” Everybody in the world is streaming stuff right now. I thought, I’m just going to prop up my phone, read something, say hello and let it go at that. Leave the mistakes and the do-overs and mispronunciations.

So far, the reaction has been pretty positive. People [are] even mentioning they like the fact that there’s a mistake in there, or a do-over, or me laughing at my own jokes…which is really the hallmark sign of an amateur. But what can I say? I haven’t read some of those pieces in a long time and a couple of them are kind of funny!

BK: Why do you think it’s important for authors and artists and musicians to still be putting their content out there on social media right now?

MP: Well, I had a musician friend one time. I was being real, like, “Oh, it ain’t nothing and it’s not important what I’m doing.” And he said, “You know, it’s fine for you to be self-deprecating, but don’t do so much of it that you’re actually denigrating your audience.”

And the truth is, I think the reason it’s important for writers and authors and musicians and all artists to be getting their stuff out there is that for many of them, it’s a matter of survival. But also, I really have, in spite of myself, come to appreciate that five minutes of connecting with some different head space, if you will. And so honestly, putting those things out there; I don’t see it as any sort of capital letter effort. If I can take 10 minutes to record that thing, that is nothing if it’s giving 500 or 1,000 people five or ten minutes of relief and maybe a chuckle.

SONG: “I Will Sing You Songs” by My Morning Jacket 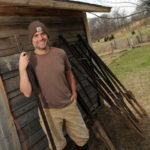 Michael Perry is the author of several books on life in Wisconsin including Population 485 and Truck: A Love Story. Visit his website at SneezingCow.com