Shruti Parthasarathy is a dancer from Middleton, Wisconsin. She practices Bharatanatyam, an Indian classical dance form that originated in southern India thousands of years ago. It tells mythological tales of gods and goddesses through movement and music.

Parthasarathy trains weekly with Bharatanatyam guru Medha Hari. There’s one catch. Hari lives in Chennai, India. The two communicate online using Skype video conferencing on their computers. “My teacher and I, and I think everyone else, was very skeptical about Skype,” Parthasarathy says, “It’s such a physical thing. It’s very hard to do over a screen.”

Despite their initial skepticism and the large time difference, the two have learned to make it work. “The bond we have makes it very easy for us to connect,” Parthasarathy says, “I wouldn’t trade it for anything.”

As a middle-schooler, Parthasarathy was frequently stressed out. She would go to her basement and dance. “All those things that I’ve done while dancing actually helped me relieve my stress.” She’s turned that realization into a way to help others. She founded the “Calm with Kalaa” initiative, where she teaches Bharatanatyam techniques to both children and adults in schools around the Madison area. “From our facial expressions to our toes; every single part of our body is being used constantly, so it is a very good workout. Apart from the physical benefits, it gives you a mental calmness in your mind,” says Parthasarathy.

The initiative has taken off, and Parthasarathy is proud of the impact it’s had. “I felt like it was a personal responsibility for me to give back to the community,” Parthasarathy said, “I think what makes me really come back to it every day, apart from it’s just my passion, is that it’s my personal identity that I would never want to lose for anything.” 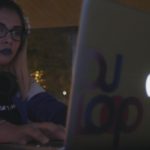