From left to right in front row: James, Sebastian, Stefanie, Zaj, Q holding the flag along with a with some locals that joined a march in Plymouth, Ohio. (Photo by Amanda Mills aka Sunshine Acid)

Sandy Solomon calls herself a protester. She’s part of a group of approximately 20 Black Lives Matter activists from the Milwaukee area marching to Washington D.C. to attend the Commitment March: Get Your Knee Off Our Necks. It’s like a modern-day March on Washington and is being organized by Rev. Al Sharpton at the Lincoln Memorial. The group left in early August to embark on the nearly 800 mile journey.

Racism was something Solomon saw from an early age growing up in Mississippi.

“We knew where the white people were across the tracks,” Solomon said. “We were just told not to go over there, so I never went over there as a kid. It was segregated like that.” Solomon said a lot of people she knows and love have experienced racism: brothers, a brother in-law, and even her son.

Solomon said she feels like Black people are often not welcome by white people in largely white areas. From left to right: Leena, Alexis, Leanne, and AJ marching through Findlay, Ohio on their way to Washington D.C. (Photo by Amanda Mills aka Sunshine Acid)

On Tuesday, August 25th, as the group was passing through Bedford County, Pennsylvania, a local resident shot at them after telling them to leave. Pennsylvania State Police, who are investigating the incident, initially said that there was an exchange of gunfire between the protesters and the residents involved, but later said they could not say which parties fired the two guns at the scene.

One of the protesters was released from a local hospital Tuesday afternoon after being treated for non-life-threatening injuries. Solomon was audibly shaken by the experience.

“We just wanted people to know that these things happen, especially in these small towns,” she said. “We want them to know at this time that we’re not backing down. It’s too many years of us just marching and being silenced.”

The march to D.C. also has Solomon thinking about what it means to be a white ally. She said white people have been on the march with them, and then “as soon as we’re getting shot at you’re going back to the comforts of your own home.”

“Now that you’re an ally they’re looking at you just like you’re Black, too,” she said. “So now you’re feeling how it feels to be Black. And nobody wants to be Black at those times.”

Solomon said throughout their trip, they’ve had boots thrown at them, people flipping them off, a man who would rev up his car to get smoke on them, and people who call them rioters. Some of the instances have been captured via live stream videos by the marchers, including Milwaukee activist Frank Nitty. But Solomon said there have been positive moments, too.

“People have bought us food from these towns, I’m saying white folks, they’ve met us at meeting points. Like if they say, ‘Where are you going to be? What are you walking towards?’” she said. “They’ve met us with medical supplies, Gatorade, water, t-shirts, socks and all of those things.”

Frank Nitty and his crew are marching (yes, walking!) 750 miles from Milwaukee to Washington D.C. to arrive on Aug 28th- The anniversary of Dr. Martin Luther King’s “I Have a Dream” speech. Today is day 4 which takes them through Gary Indiana ❤️ I’ll try to keep up with them for a bit and take some tintypes along the way. You can support them via Cashapp – $itsfranknitty – funds are welcome to help them get hotel rooms at night and food. Send love and good vibes ✌🏽

Solomon said the journey has been worth it for them.

“We’re going to make sure that we’re not doing this for nothing at this time,” she said. “We’re going to keep going. It’s not no compromise … we want the demands that we want. The equality.”

SONG: “Another Man” by Nickel & Rose 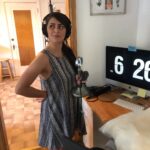 Rachael Vasquez is a reporter and producer for Wisconsin Public Radio. She’s a native Californian, but her friends and family all tell her she’s grown a Wisconsin accent. She loves hot dogs, C-SPAN, and comfy sweats.