Dinorah Marquez is the director of Milwaukee’s Latino Arts Strings Program.  As a young girl, she grew up on the south side of the U.S.-Mexico border.  When Dinorah moved to the U.S. she didn’t speak any English and was quite shy and scared.  She eventually found her voice through playing an instrument.  Decades later, Dinorah hopes to give other young students the same experience.

After viewing the segment, check out this extended clip featuring the group performing at the Wisconsin State Capitol for the annual MLK Day Celebration. 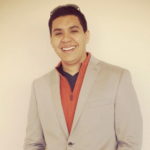 Eddy Cevilla was the multimedia producer and reporter at PBS Wisconsin.