Musician Lou Shields Embraces Driftless Region, Sounds Of The Past

Musician and artist Lou Shields is much like the old school troubadours he sounds like. With his scraggly hair, work-jeans held up by suspenders, trademark Dobbs hats and work boots, Shields looks like the embodiment of a 1930s character from a John Steinbeck novel — and his sound goes along with that.

Shields never rode the rails like a 1930s vagabond, but he has traveled extensively, ultimately finding a fitting home in the Kickapoo Township. It’s where he and his wife, Stacey Roou, live as homesteaders with their two daughters. They split their time among that cabin, a home in Madison, and Chicago.

Shields, a Chicago-area native, discovered the area while researching old barns for another passion of his – drawing.

“I became obsessed with old farmhouses and I began drawing them,” Shields said. “One of my series — when I was traveling heavily — was to document them before they were demolished or burned. So, I did a series of drawings and became more interested in the history behind them.”

Then he met his wife, who happened to be doing the same thing with photography.

“We began to really search these places out together,” Shields said. “We found this little cabin up in the Driftless Region of Wisconsin — 15 acres and a whole lot of wood piles all over the place. When I ultimately bought this place, they were going to burn all these wood piles, all this reclaimed lumber. I was like ‘No way.’ As soon as I got the place I started building things out of these massive piles of true two-by-fours and big barn beams and whatever else I could find.”

Before discovering Wisconsin, Shields traveled around the country to satisfy another passion — skateboarding. He said the scene shares the do-it-yourself spirit of his music.

“I think the spirit of skateboarding, the DIY idea, the outsider — kind of using whatever landscape is in front of them to try to make it work for themselves — is part of that,” Shields said. “Ascetically, there probably is no correlation at all, but the spirit is something similar.”

Shields says he also didn’t know about the large number of artists in the Driftless before he moved there.

“When we first moved into the area, we had no idea, but the hills of the Driftless area are totally populated by a lot of different folks.” Shields said. “Some people just want to get away from the city. Some people are interested in farming, organic farming and things like that. There are a whole lot of artists and musicians.” Shields music fits in with the scene and hearkens back to a long-gone time. He’s a one-man band who plays a 1931 metal guitar from a Sears, Roebuck & Co. catalog, a banjo and harmonica. He also plays percussion by standing on a homemade stomp box he made. It transports audiences to a time when folks would play music on their front porch after a hard day of work, usually on their own land.

As for playing by himself, Shields says that’s another homage to the past.

“I really love the musicians of the early days; that’s what they did,” Shields said. “They couldn’t afford to pay a band. I really love the idea of the troubadour that goes from place to place to make their music.”

Despite Sheids never-ending quest to live like it’s 1930, he met his wife in an ironic way. His wife, Stacey, learned about him online and they met after one of his shows. Looking back, Shields agrees if not for the internet they may have never met.

His most recent album, appropriately called “Cabin Sessions,” was recorded at his cabin using a vintage reel-to-reel recorder.

“I wanted to get the natural sound of the interior of this place,” Shields said.

While Shields and Roou respect the traditions of the past, they did have to enlist the help of a reality television show, “Homestead Rescue,” last year to help save their homestead, which was in danger of being washed away.

“Little did we know, our cabin is built on the side of a bluff and it was literally washing off because of the water that was coming through,” Shields said. “We weren’t on low land, we weren’t getting flooded, but we were just as threatened in a lot of ways.”

The show succeeded in helping Shields save his place, a cabin he happily calls home when not on the road. 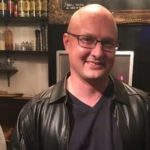 Bob Chiarito is a Chicago-based freelance reporter who writes for The New York Times, Reuters, Agence France-Presse and a host of others.