Thomas, Cierra, and Joshua Riederer on a family vacation in Florida. (Cortesy of Cierra Riederer)

Earlier this year, “Wisconsin Life” started working with students at Monona Grove Liberal Arts Charter School, or MG21. The goal was to get more high school student stories on the airwaves.

When we first showed up in the classroom, there was one student who seemed to be particularly interested in creating radio and interviewing people right away.

Plus, Cierra has had an iPod since second grade, so she’s recorded “everything,” like family trips. On the first day of class, Cierra had about four story ideas, which is impressive. Stories about school lockdowns and charter schools. Ultimately, she decided to work on a story about her brother, 13 year-old Thomas Riederer.

Cierra and Thomas like to do a lot of things together. Play Minecraft and pool. Watch movies. Drive around with the windows down while they belt out Christmas songs and The Beatles. Eat his favorite meal: grilled cheese, fries, and root beer. Classic sibling stuff.

“I decided to do [a story on] my brother because I love him. My brother has Down syndrome. I wanted to see how that affects our family and how he’s not really different from anyone else but at the same time he is,” said Cierra. “My brother is just an interesting person so I was like, ‘Why not do that interesting person in my life?’”

Cierra then went on to interview her mom, Michelle Riederer, and grandmother, Shirley Drouin, about Thomas. The following are excerpts of those conversations:

(🔊Audio is Cierra’s full interview with her grandmother, Shirley Drouin🔊)

Cierra Riederer: Do you remember the feelings you had when you were told that Thomas had Down syndrome?

Shirley Drouin: I probably didn’t have any real feelings. I just thought, “OK what can we do for him to make his life better?”

Cierra: What are some of the best memories that you’ve had with Thomas?

Shirley: When we’re in the car and he puts in the CD. Right now, today, it’s the Johnny Mathis Christmas CD. And we sing these songs each time he gets in the car, 365 days out of the year. I love it!

Cierra: Why do you love Thomas so much?

Shirley: He’s made my life fuller. He’s never angry. Generally, he does not hold a grudge. For that reason alone I love him.

Cierra: What things are hard for Thomas?

Shirley: Focusing. I think that it’s hard for me to get him to focus. He has a short attention span, so that’s probably the most difficult. Oh and one other thing – his ability to verbalize. I wish I could do something for him. I just don’t know where to go.

Cierra: Yeah I agree with that.

(🔊Audio is Cierra’s full interview with her mother, Michelle Riederer🔊)

Cierra Riederer: Why do you love Thomas so much? Aside from the fact that he’s your own kid.

Michelle Riederer: He just brings another spin on life. You know when you’re not having those good days? Then he can kind of turn it around sometimes.

Cierra: What are you most proud of him for?

Michelle: Wow, there’s a lot of things. Maybe his stick with it attitude. He will put up a bit of a fight about things sometimes but he stays with it, you know?

Cierra: Yeah, I guess I haven’t really noticed that. I get that for like Special Olympics and cheer and stuff.

What challenges come with having a child with Down syndrome?

Michelle: Not knowing what the future holds for him. Making sure everything is in place, you know, when he gets to be to the point of independence. He’s treated just like you or your brother, for the most part. But, our goal is to make him as independent as he can be so when the day comes that we’re not here anymore he can still navigate the world.

Cierra: I told him if he ever wants to come live with me, he has me.

Cierra Riederer: Oh no. That’s a lot. That’s a hard question to answer.

He does a lot of things and it’s like, “Holy canoli! I would never do it.” Like he does show choir and he’s the loudest one, he’s in front. Sometimes he doesn’t even go routine and he’s just front and center. He puts himself out there. And I think that’s what I’m most proud of him.

And, he doesn’t give up. We go to the Y and practice basketball or whatever and he puts in the work and he’s a strong kiddo.

Cierra: Oh yeah. I teach him a lot of good things and a lot of bad things. (laughing)

Maureen: As any good big sister would!

Cierra: Yeah. Like he can make any bad moment good, so he’s great. These interviews were by Cierra Riederer, a junior at Monona Grove Liberal Arts Charter School. Hear from more MG21 students throughout the year on “Wisconsin Life” and on the special, “Classroom Frequency: Student Voices From Wisconsin.” 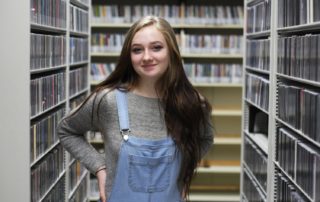 The Poetry And Music Of Coyote Johnson