My Neighbor, The Mayor

The James B. Bowen House at 302 South Mills Street in Madison, Wisconsin. (Photo courtesy of the Wisconsin Historical Society https://www.wisconsinhistory.org/Records/Property/HI16065)

In many college neighborhoods, it’s pretty common to find a beautiful, historic home surrounded by massive apartment complexes and dilapidated duplexes. How do these old homes survive? What happened inside those walls? These are questions Ian Lewitz regularly asked himself when he lived near one particular sandstone home in Madison.

My Neighbor, The Mayor

My sophomore year of college, I lived two doors down from what was once the former residence of the tenth mayor of Madison.

Down the block from the well-worn brick house I lived in, stood an enormous stone structure with ornate wood carvings decorating the outside and a wooden cupola capping its roof. The building stood out among the countless college-worn houses surrounding it. I was intrigued and soon learned that it was registered with the National Register of Historic Places and was a City Landmark.

The James B. Bowen house was originally built in 1855 for Seth and Harriet Van Bergen as a farmhouse for their 60-acre plot of land in the Greenbush Neighborhood of Madison. The Van Bergen’s sold their home to the well-known local homeopathic physician James B. Bowen. From 1871 to 1872, Bowen served as the mayor of Madison and went on to become president of the Park Savings Bank.

After Bowen’s death, his daughter and her husband inherited the estate. Their son eventually sold the property to a Lutheran organization. Plans for the home to serve as a children’s hospital were never realized, but the structure did function as the home of two UW fraternities and an orphanage. In 1934, the interior of the home was converted into apartments.

With the neighborhood now divided into cramped lots, it’s hard to imagine the vastness of what was once a sprawling estate. What occupies space as a laundromat was probably where the Bowen’s rode horses. The area where the carriage barn stood is occupied by another home.

My own house lacked the same majesty the Bowen house possessed. Much of the Northside of my house was covered in an invasive ivy plant. There was an overgrown pit in the backyard where underneath a wooden crate, a family of rabbits made their home; disappearing in winter only to reappear in greater numbers in spring. The inside was run down, cursed by decades of irresponsible students scraping the floors and bumping into the walls with new furniture each fall. At one point, chunks of ceiling littered our staircase after a leak from the upstairs bathroom made its way downstairs.

If I had lived in the same house 140 years earlier, I wonder whether the mayor and I would’ve been close. In need of an onion or some flour, would he have obliged with a neighborly helping hand? If I had fallen ill with the flu, would he have provided me with the best homeopathic medicines the 19th century had to offer? Or perhaps he would’ve granted me a look behind the curtain of city politics, giving an impressionable young student a look at the underbelly of democracy.

I still walk through the old neighborhood every once in a while. Making my way past my old house and moving further down the block toward the Bowen home, I always check to make sure it’s still standing. I fear one day I’ll walk the tree lined streets and find the house not there, its beauty replaced with flimsy scaffolding for a new apartment building. But for now, along with Bowen’s legacy, it stands, and I don’t think it’s going anywhere anytime soon. 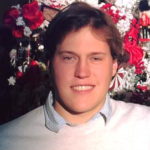 Ian Lewitz is a recent graduate from the University of Wisconsin-Madison. His three favorite things about Wisconsin are its lakes, its cheese and its polka.