When he graduated from college, Appleton native Jed Schleisner had two things: a Biology degree from Northland College and a new marriage to his young wife.

What he didn’t have was a job.

“It was ’84 when there was another recession and, long story short, I couldn’t find a job in biology,” Schleisner said.

Schleisner and his wife moved to Minnesota, where she pursued a degree from the University of Minnesota and he took a job at a department store. There Schleisner found a new career, one that combined his passions for art and science.

“I had a friend there that said he was going to go to neon school, and I’m like, ‘what’s that?’” Jed remembers. When the friend explained that the school taught students how to build and restore neon signs, Schleisner eagerly signed up. “It was actually just a night course that just was for a hobby, and I ended up being good at it and found it as a passion and went to the school for a professional course.

After his training, Schleisner was offered a job in Hawaii, a state with growing demand for neon sign building and repair. When that demand dried up, Jed and his wife moved home to Appleton, and Jed set up shop.

“There was guys in the neon shops in the area, and they were pretty much stalwarts, and they weren’t leaving their jobs any time soon,” Schleisner said. “I pretty much had to start my own studio in order to make a living at it here.”

“I do all the different facets of it … It’s not just artistic. You got to do the artwork, you have to do the glass-bending, and then you also have to do the wiring and hooking up the transformers to the sign,” Schleisner said.

Over his long career, Jed has also built a large collection of classic neon signs from around the country.

“They’re old signs from the 40s, maybe even earlier,” Schleisner said. “I liked the old Americana stuff. I grew up during that period, seeing some of the old signs that were still up.”

In 2014, a selection from Jed’s collection went on display at the History Museum at the Castle in Appleton. That exhibit, “Neon: Darkness Electrified,” is scheduled to continue through October 2015. 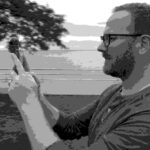