No Obstacles For Parkour Athletes

On a shining, sunny day in Platteville, Wis., Asa Krueger and a bunch of other, mostly college-age athletes are flipping, jumping, vaulting and traversing a course that to most people would look like a set of impassable barriers.

This is the outdoor gymnastic pursuit known as parkour. Those who practice it specialize in letting no obstacle stop their forward momentum; as an extension of that, they have developed a freestyle, expressive approach to movement that is as artistic as it is athletic.

Krueger first discovered parkour as a kid in Campbellsport, Wisconsin, when searching online for new trampoline moves. But this sport, art and philosophy really took off for him, and a group of his friends, after he entered the University of Wisconsin – Platteville.

Wanting to tell the world about it, they tried to start a parkour club on campus. Three times, the idea was denied by college administrators. Such caution is not surprising, given that since its birth in France in the 1980s, many of parkour’s most unforgettable images are of people climbing over fences, traversing famous landmarks, even leaping from rooftop to rooftop.

“There’s a lot of insurance restrictions that come up when you have a sport that can be potentially deadly,” Krueger concedes, although he says his own group doesn’t take that kind of risks.

Rather than give up, Krueger and his friends got help from the World Freerunning and Parkour Federation, and from the collegiate division of USA Parkour, which offers supports for campus groups, including an insurance plan.

On the fourth attempt, Krueger says, “The school was like, ‘We’ve got to let it happen now … There’s nothing we can deny anymore.’”

The group took the name Avialae, from the classification of animals that includes birds and some others who fly.

For observers, the “flying” of parkour may seem fleeting, but in the air, it’s different.

“You have this moment of bliss,” Kruger says. “It’s absolutely perfect.” Seeing oneself ten feet off the ground, “you do feel like you’re flying.”

The students flew over a different sort of obstacle when they pulled off the world’s first collegiate parkour competition, the 1st USAP Collegiate Invitational, in September 2015.

It’s a feat Krueger knows they will one day “brag” about to “future children or other family members.”

But for now, they’re still in the blissful moment: running free, training hard and refusing to admit any obstacle. 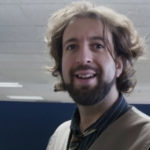 Benson Gardner is a freelance contributor to Wisconsin Life. He remembers zealously upending a single piece of city park furniture one solstice night during his Menomonie coming of age, to create the decidedly unimpressive monument to creativity known as “bench-henge.”